A New Kind of Enemy 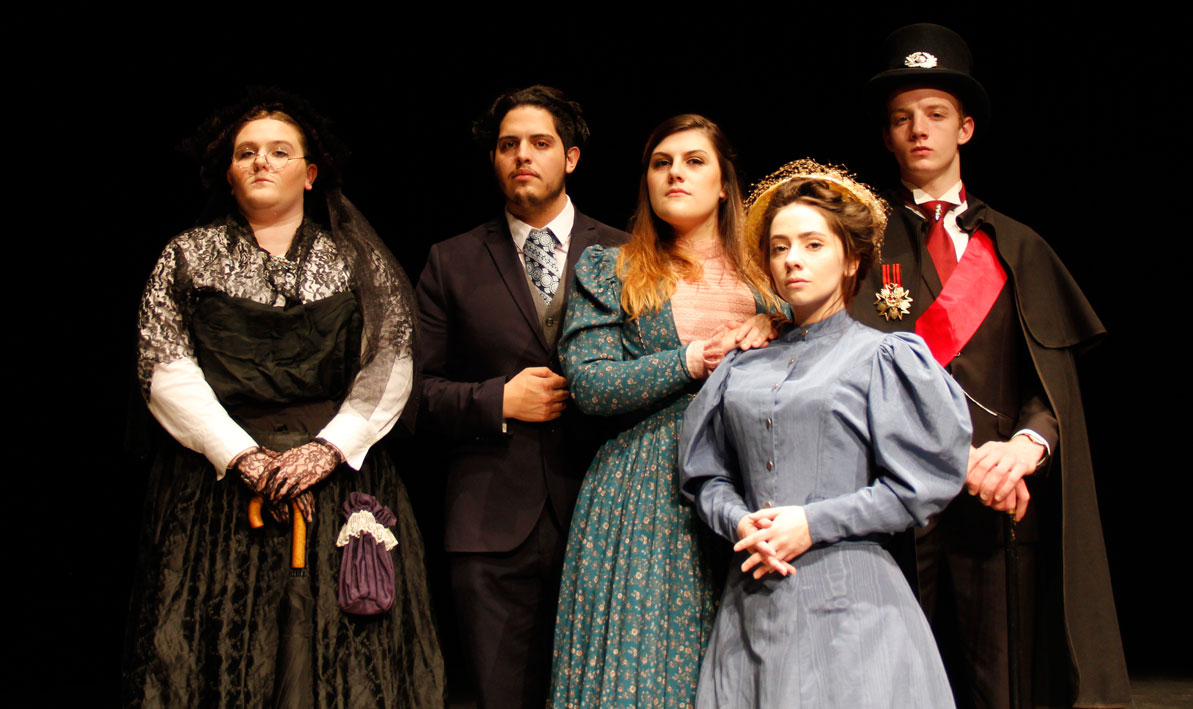 Henrik Ibsen wrote "An Enemy of the People" in the late 19th century, a time when women largely lacked both power and standing in male-dominated society.

It's not surprising that the main character in Ibsen's 1882 play is a man, Dr. Thomas Stockmann, "Medical Officer at the Baths" in a town off the southern coast of Norway, according to the script. His significant other, Catherine Stockmann, is described only as "his wife."

For the Holyoke Community College Theater Department's spring 2018 production, however, which opens April 19 for a three-day run, director Tom Geha reversed those roles. The whistle-blower whose discovery of polluted waters threatens the town's fortunes, thus incurring the wrath of its residents, is a woman, Dr. Catherine Stockmann. Thomas is her dutiful husband.

"I don't like to change things unless I feel like it's going to benefit the play," said Geha, an adjunct HCC theater instructor. "When we read it for the first time with all the actors it was like a eureka moment. It's almost like it was written for a woman. The lines are just amazing because the town is gas lighting her and telling her she's crazy, doing a lot of explaining to her, making fun of her discoveries as a doctor, making fun of science. It just goes in so many directions because she's a woman, and it works."

Even though Ibsen, called the "father of modern realism," was known for writing strong female characters, Geha found the play too "man heavy." As originally written, the only other female character was Petra, a feisty schoolteacher and the daughter of Thomas and Catherine.

"I wanted Petra's feistiness to come from somewhere," Geha said, "and I thought, what if it came from her mother, and rather than being docile and obedient, she was an independent and educated woman who at the time would have stood out."

Geha added another woman to the cast by changing the gender of the aptly named Morten Kiil, played by Hannah Labreche of Holyoke. Kiil owns the tannery responsible for polluting the baths the town relies on for its tourist trade. She also happens to be Thomas Stockmann's foster mother, setting up a juicy mother-in-law/daughter-in-law dynamic that adds another layer of tension, says Geha.

What's more, the mayor of the town – and its chief defender – is the doctor's younger brother, Peter Stockmann. That the doctor is now a woman introduces a completely different kind of sibling rivalry, says Geha. Before Catherine reveals her research about the contaminated baths, there's genuine affection and playfulness between the two.

"She pokes fun at him," said Geha. "There's a real teasing element, but then when everything collides, it's just pure hate, and it's wonderful."

While other recent productions have updated the setting to modern times, like 21st century Flint, Michigan, Geha kept it as is. Mostly. He did make one slight adjustment, advancing the chronology from the 1870s to the 1890s to account for the decade when Norway had its first female doctor. That detail was important to him, even if the only real change is a single digit in the theater program.

Also, he said, a modern adaptation would destroy the timeless themes that give the play its resonance and make it a theater classic.

"It's a play about questioning truth, about the nature of truth, about commerce versus the environment and who wins out," Geha said. "If it's modern, it's like we're just turning on the news, and I think people are a little tired of the news."

Plus, he said, "I really wanted the costumes."

Check out scenes from the April 18 dress rehearsal in our Facebook album ...

STORY and PHOTOS by CHRIS YURKO: (Thumbnail) HCC student actors rehearse a scene from "An Enemy of the People." (Above) "An Enemy of the People" family portrait, from left to right: Hannah Lebreche of Holyoke as Morten Kiil; Louis Burgos of Holyoke as Thomas Stockmann; Alma Huremovic of West Springfield as Dr. Catherine Stockmann; Carina Savoie of Agawam as Petra Stockmann; and Dan Ireland of Feeding Hills as Peter Stockmann.