'It's just got that sound' 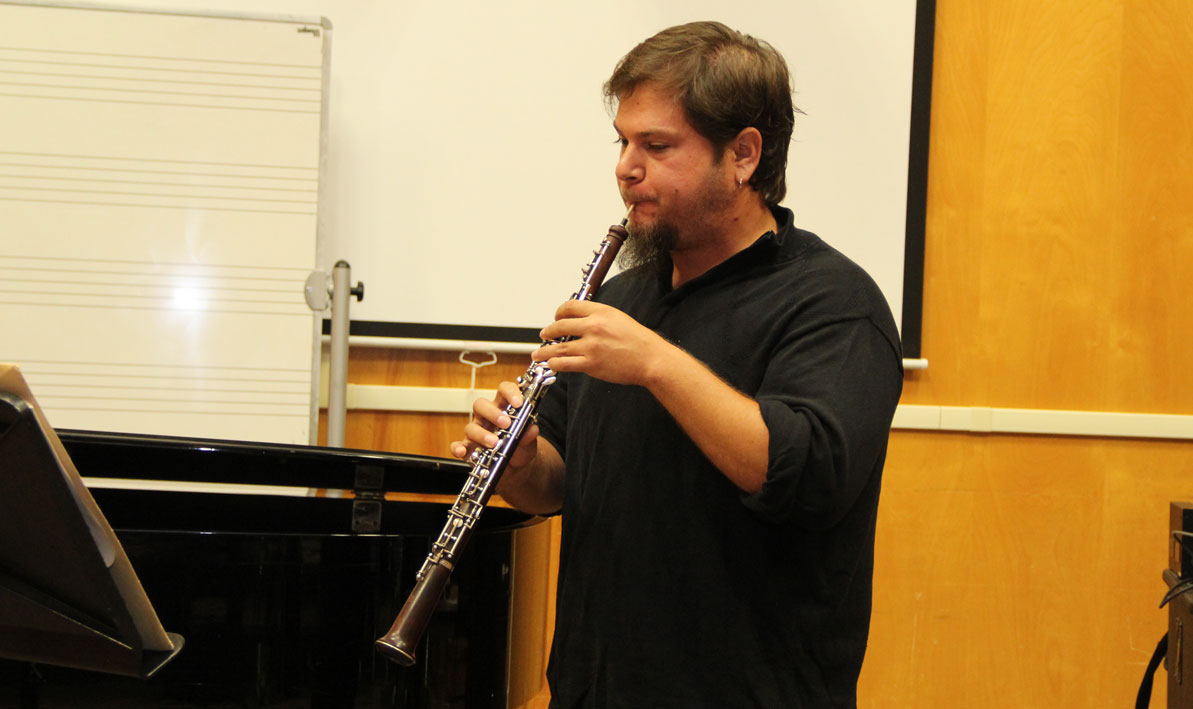 The first time he heard one, Aaron Lakota knew he wanted to play the oboe.

He was 12 years old and attending what they call an instrument petting zoo in Belchertown for students interested in joining beginner band.

"I wanted to play either percussion, clarinet or trumpet," Lakota, '05, said last week during a visit to his old stomping grounds at HCC. "I had never heard an oboe before."

Then, his teacher, who later became his mentor, played one.   "In fact, she played this oboe," he said, indicating the one he had brought to HCC. "It was hers. She gave it to me as a gift. She played this, and everything else went away. I said, I want to play an oboe, cause it's just got that sound."

For those unfamiliar with the oboe, it's a woodwind that looks like a clarinet, sleek, generally black. Instead of a mouthpiece that looks like a duckbill an oboe has a tubular, pencil-thin double reed sticking out of the top onto which oboists pinch their lips and blow.  Few people play them, because it's so difficult, and orchestras generally have only one. The sound has been described as being as close to that of a human voice as an instrument can get.

"I always knew that I wanted to be surrounded by music and the oboe in some way," Lakota said this week during a guest performance at HCC as part of the Music Department's Alumni Music Series.

Lakota talked a bit about his academic and professional career during breaks between performances of Schumann's Three Romances for Oboe and Piano, which he called "chop busters." He was accompanied on piano by alumna Ania Bostock, '03, an adjunct instructor of music at HCC.

Lakota, 32, now lives in Holyoke and has been playing the oboe for 20 years. He is an active music teacher and performer in the Pioneer Valley. He has played with the Holyoke City Symphony and the Farmington Valley Symphony, as well as other chamber music groups. He is a founding board member and artistic adviser with the Valley Winds and was recently named principal oboist with the Pioneer Valley Symphony.

He is also a professional reed maker. His business, A.Lakota Reeds, provides hand-made reeds for oboists throughout North America. It's the reed business, he says, that has allowed him to focus on his music.

"I'm a good reed maker, so these little things are what I do to supplement my income," he said. "It's allowed me to play music and be a musician full time. I don't have a day job. I teach, I make reeds, I play music, and it's worked out great."

He wasn't always sure it would.

Despite amassing 64 credits here, he never graduated from HCC. In the spring of 2005 he got a D in music theory and quit school.

"That was my fault," he said. "I was a total slacker. I really worked hard at music. I worked hard at performing and practicing, but I spent more time in practice rooms than classrooms. That was sort of both a detriment and a benefit. "

He not only quit school, he quit music entirely for more than a year. Then he reached out to Fred Cohen, an oboe teacher at UMass, looking for lessons. Cohen convinced him to go back to school. Lakota transferred his credits, earned his bachelor's degree in music from UMass and then his master's degree.

"I think about HCC a lot," he told students, "and I attribute the success that I have now in large part to here, and also my success in making it through UMass, and my success making it through my grad studies. It gave me an introduction to a life when I wasn't sure what I wanted to do yet."

He urged students to "keep embracing what you're doing."

"If you work hard at things, I think you can succeed with them, no matter what the field is," he said. "It's less about talent than it is about working your ass off and putting in the time and doing it."