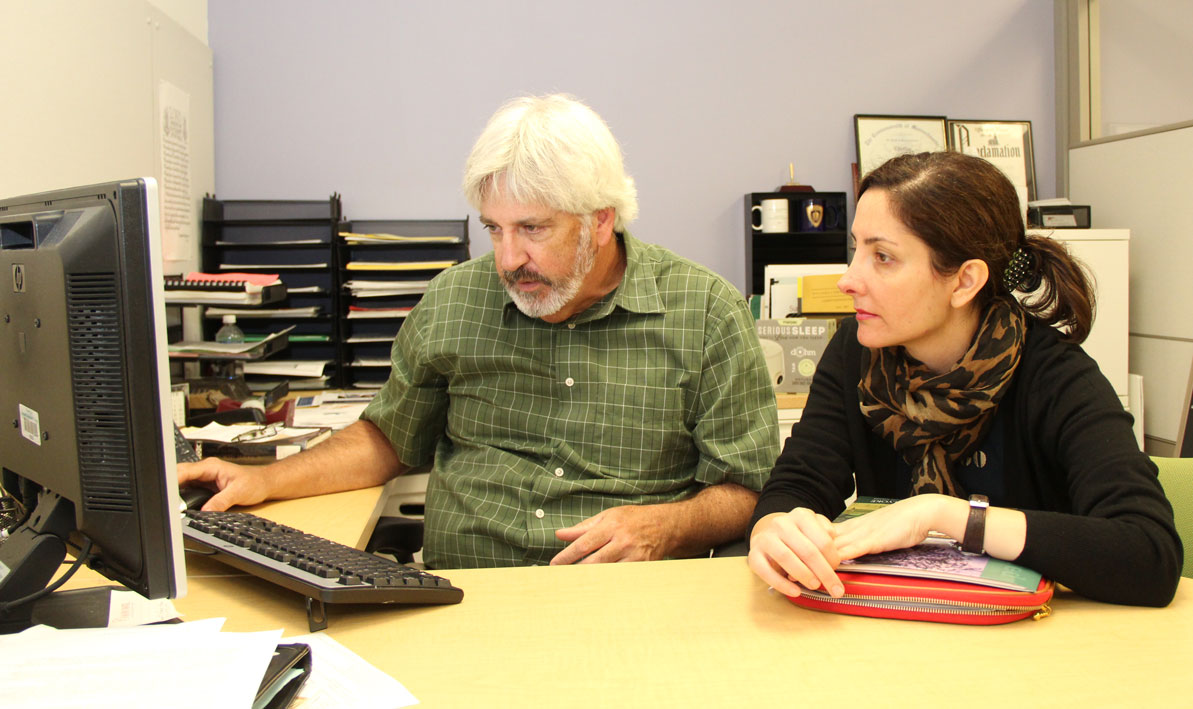 In the past, new students who came to the HCC Advising Center seeking guidance on choosing a major were often referred to the Career Center.

If students have a clear sense of their career path, the thinking goes, it's easier for them to choose an academic concentration, and they are more motivated in their classes.

It is not an exceptionally long walk from Frost 273 to KC 322 but directions could be confusing to someone unfamiliar with the campus:

"If they were unsure about a major, we'd always refer them," said Linda Scott, director of Advising, "but we didn't know if they actually went."

Those days are gone.  On Monday, Sept. 26, the Career Center officially moved into the Advising Center. Accordingly, the suite of student services now located in Frost 273 is collectively called the ACT Center, short for Advising, Career and Transfer Center. (HCC Transfer services, under the direction of coordinator Mark Broadbent, moved from Admissions into the Advising Center in 2011 after the area was renovated.)

"Advising and career counseling are very linked," said Scott, "because we're talking about career goals, their life goals. All the data says that when a student has a goal and understands that goal ahead of time, they're more likely to succeed, and that's what we're about."

The move comes at the same time as another big change in academic advising at HCC. New students no longer have to declare a major when they first enroll for classes. They can postpone that decision until the end of their first semester.

All of the "undecided" majors are being assigned to one of the three Career counselors who now have offices in the ACT Center: Richard Powers (Career Center coordinator), Bemie Enyong and Margaret Downing. The Career counselors then become the students' academic advisers.

Career exploration is an important resource and something HCC tries to introduce to students early in their college careers, said Michelle Snizek, director of Retention and Student Success.

"If they are 'undecided' when they first check in, they can immediately be sent to a career counselor," she said. "Those students can now access that service right here, in the ACT Center.

According to Snizek, the Advising Center records about 17,000 student visits during each academic term. So it is a high traffic area where more students are likely to be exposed to Career services.

"This is where students are coming when they first enter the college," she said. "When they apply, they come here to take their college placement test, then they come over to advising, where they do educational planning and set up their schedules."

The Career Center had been tucked into the back corner at the end of the third floor corridor of the Kittredge Center.  All Career center activities, including career counseling and career workshops, will now take place in the ACT Center, unless otherwise noted.

"To have the Career Center embedded within Advising is just an amazing resource for students," said Scott, "and then we also have Transfer here. So we have three key functions of the college in one area where we're all working together. It's phenomenal. We've been wanting this for a long time."