Politics in the spotlight 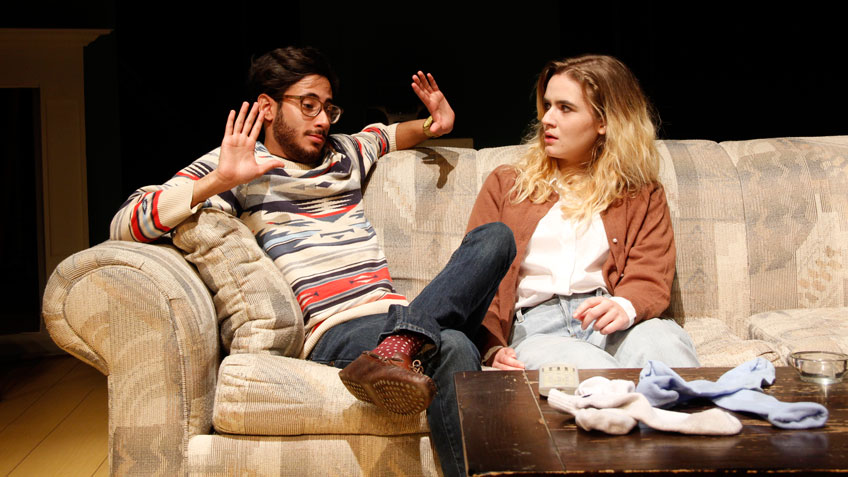 A successful, professional woman is in line for a prominent political post. A minor indiscretion is uncovered that raises questions about her character. The ensuing media frenzy threatens her reputation and her nomination.

If that seems like a familiar narrative from U.S. political history, it is. It's also the plot of Wendy Wasserstein's 1998 play An American Daughter, which the HCC Theater Department will present Nov. 17-19 on the stage of the Leslie Phillips Theater.

In the preface to the play, Wasserstein cites several historical references that inspired it, most notably "Nannygate," the scandal surrounding the nomination of Zoe Baird to the U.S. Supreme Court by President Bill Clinton in 1993. Baird, a successful lawyer, removed her name from consideration after it was revealed she had hired undocumented immigrants for childcare.

"Wasserstein was frustrated about how Baird was treated," says director Denise Boutin, "how she was treated as a woman, whereas a man would not be asked about nannies and how they got paid."

In An American Daughter, the main character is Lyssa Dent Hughes, played by HCC student Marissa Delisle of Chicopee. Lyssa is a brilliant doctor, wife, mother of two, direct descendant of President Ulysses S. Grant, and daughter of a prominent U.S. senator.  The President nominates her for surgeon general, a seemingly safe and inspired choice. Then, a scandal erupts — "jury-gate." The indiscretion? A neglected summons to appear for jury duty.

During interviews, Lyssa comes off as elitist, cold, out of touch with middle America, in particular, out of touch with stay-at-home moms. She must decide how hard to combat this image, and the play examines the effects of this unraveling on her family and friends.

"There are a lot of parallels to the world of politics right now in the United States," said Boutin, "especially the elitism issue and how a woman is supposed to behave as a public figure."

HCC theater professor Pat Sandoval chose the play to coincide with the Presidential election and Hillary Clinton's selection as the Democratic nominee.

"We decided this would be the 'year of the woman' in the HCC Theater Department — women playwrights, women directors," said Sandoval, who will direct the play Getting Out by Marsha Norman next spring at HCC.

Sandoval asked Boutin to be the guest director for the Fall 2016 production. Boutin, who lives in East Longmeadow, is a 1977 graduate of Holyoke Community College. She taught theater and arts at the MacDuffie School in Springfield for 25 years and founded the theater program there.

"I was thrilled," Boutin said. "I'm excited to come back here. It's a real pleasure to see where the theater program is at."

She was also excited about directing a Wasserstein play.

"Wasserstein is so good at writing round characters," Boutin said. "They're really fleshed out and the women in her plays are significant roles that are really meaty, and the female relationships have depth."

Her main concern was that the students might not be able to handle the material or understand the historical significance.

"Wasserstein writes the way people would like to articulate their thoughts, really clearly and eloquently," Boutin said. "The characters are all smart. They're well educated. They're all clever and well informed. To that end, I was a little nervous, cause not only would most of the actors be playing someone 10 to 40 years their senior, but they'd also have to wrap their mouths and brains around stuff that was not part of their historical world."

Those concerns were quickly put to rest, she said, once rehearsals began.

"I've been so pleased with their ability to master the language, and they are all real eager to be fully informed," Boutin said. "That's a credit not only to the students here but to the theater department."

The cast also includes Larissa Polk of Springfield and Naidelyn Cruz of Holyoke as Lyssa's friends Quincy and Judith; Gabe Cifuentes of Chicopee as her husband Walter; Chris Webber of Springfield as Alan, her father, the senator; Maddie Riel of Easthampton as Chubby, her step-mother; Seth Olsen of East Longmeadow as Morrow; Patrick Ryan of Springfield as Timber; Jakub Bucior of Suffield, Conn., as Jimmy; Christopher Vega of Holyoke as Billy; Jessica Burgos of Chicopee and Joey Chiaravalle of Ware as members of a television crew; and Mariah White of Palmer and Dan Sullivan of Southampton, as offstage voices.

HCC student Kathleen Burke of Holyoke is the stage manager.

The HCC Theater Department will present An American Daughter, by Wendy Wasserstein Nov. 17-19 at 7:30 p.m. in the Leslie Phillips Theater, Fine & Performing Arts Building, with a matinee performance Sat., Nov. 19, at 2 p.m. The Friday Nov. 18 show will be ASL-interpreted.

Tickets are available at the door: $10 (general admission), $8 (students and seniors), and $5 (HCC students, staff and faculty with a valid ID).