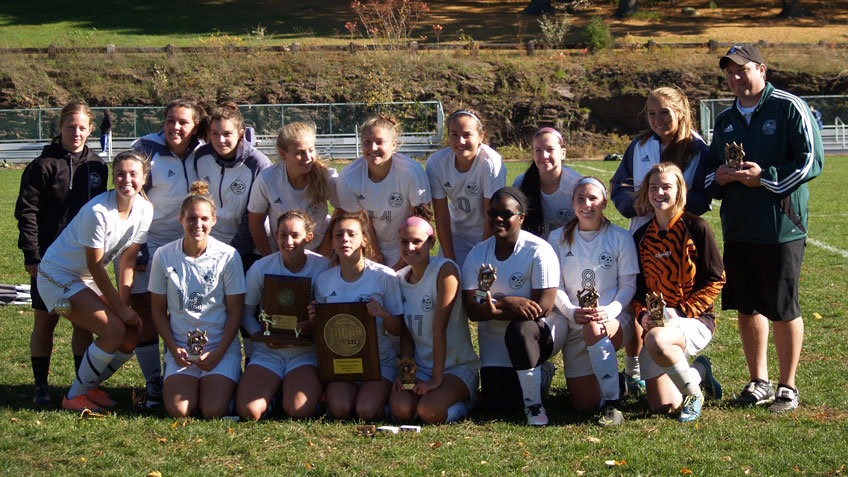 The Cougars had a perfect 11-0-0 record in regional games this year, outscoring their competition 73-2 while registering nine shutouts.

Sophomore sisters Natalie Galindo, of Chicopee, and Jennifer Galindo, of South Hadley, both graduates of Chicopee Comprehensive High School, led the way for HCC in Sunday's championship win, dominating the pitch as they have all season long. Both players scored on spectacular free kicks, Natalie in the first half for the Cougar's first goal; and Jennifer in the second half for the team's third goal. The Galindos lead the team in points this season, Natalie with 42 (15 goals, 12 assists) and Jennifer with 37 (12 goals, 13 assists).

Sophomore forward Olivia Neiswanger, of Holyoke, a graduate of Cathedral High, scored the Cougars' second goal before assisting the one by Jenni Galindo.    Sophomore forward Taydrah Clinton, of Springfield (Renaissance High) added the Cougar's fourth goal late in the game.

"Allie was an absolute force and one of the best players on the field for the entire 90 minutes," he said.

The Lady Cougars have won five consecutive New England Championships and nine of the last 11. They are undefeated in Region XXI over the past four seasons, last losing in 2012.  The team will next play for the National Junior College Athletic Association Division III District Championship on Sunday, Oct. 30, at 12 noon against Nassau Community College, the Region XV champions.

That game will be played at home at O'Connell Field.  A win there will earn HCC a spot in the Elite 8 of the NJCAA Division III National Championship Tournament.