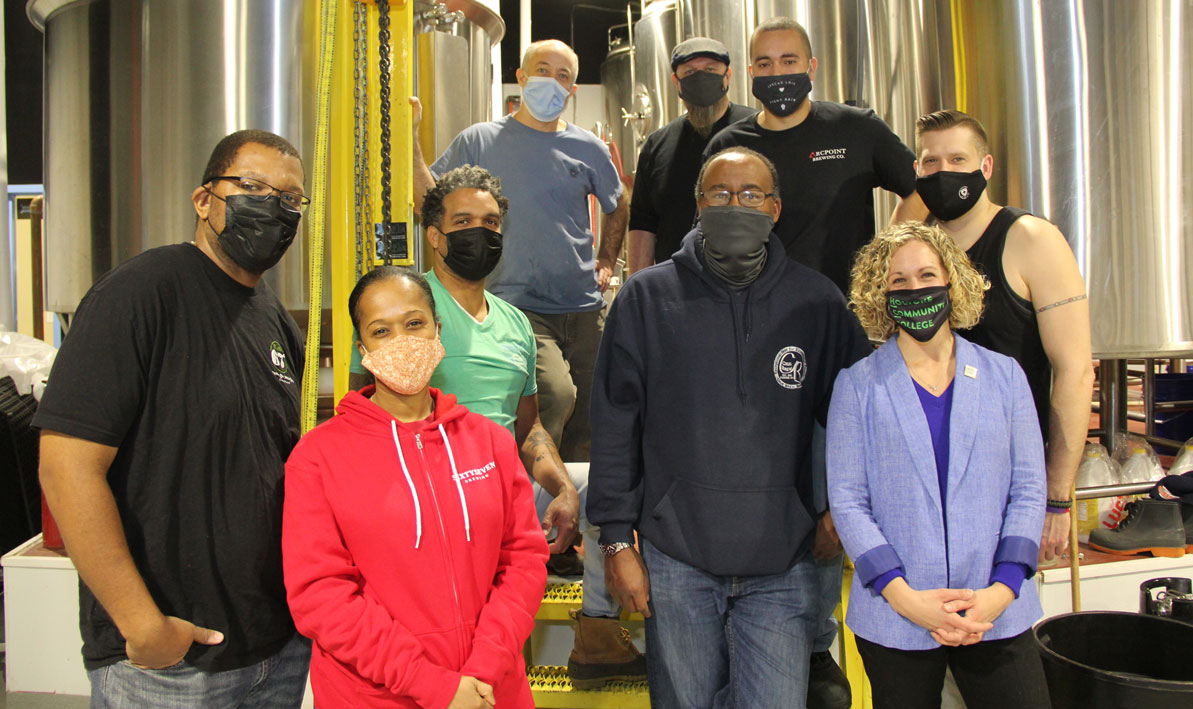 For anyone interested in cold, tasty beer, here are some sobering statistics:

Out of some 8,000 breweries in the United States, only 60, or less than 1 percent, are black-owned businesses. In Massachusetts, a virtual hopbed of craft beer with more than 200 breweries, only about a half dozen are black-owned. One of them is White Lion Brewery in Springfield.

"The fabric of the craft beer trade doesn't mirror the fabric of the communities we work, play and live in," says Ray Berry, White Lion's owner and founder, who sits on the Diversity, Equity and Inclusion committee of the Massachusetts Brewers Guild.

In response, Berry and the owners of three other Massachusetts breweries – Arcpoint in Belchertown, Crue Brew in Raynham and 67 Degrees in Franklin – have banded together on a project they hope will draw more people of color to the industry.

The project is called "As One." Fittingly, it's a beer, specifically, a juicy New England IPA. A portion of the proceeds from the sale of this limited release brew will go toward the creation of a scholarship at Holyoke Community College for students of color who enroll in its beer, cider and winemaking program.

"Throughout the country, there have been a number of initiatives driven by breweries, trade stakekholders, and guilds who recognize the diversity and inclusion deficits and want to be change agents," said Berry. "Some of those initiatives happen to be scholarship driven."

The idea for "As One" came from C.J. Eldridge, co-owner of Arcpoint, who had read an article about the experiences of black Massachusetts brewery owners in a historically white-dominated industry. The story featured interviews with Berry and Kevin Merritt, owner of Crue Brew, and also mentioned 67 Degrees, which is co-owned by Arnold Cruzeau.

"I saw all those guys in the article and it inspired me to want to get together with them and brew something and also bring some awareness," said Eldridge. "We want to attempt to spread brewing out to more people of color, not necessarily just black, but people of color in general, and get them into the business. Let them know what it's about."

HCC debuted its beer, cider and winemaking program in the fall of 2020, so the decision to partner with the college made sense, said Berry. "Craft beer is all about local," said Berry. "If we want to expand the conversation, this is a perfect opportunity for us to align ourselves with a great local institution."

The label for "As One" includes the names and logos of all four breweries plus HCC's, along with a poignant description: "As One, a collaboration of unity, is just that. We came up with a conversation starter, something to bring people together ... As many of you may or may not know, people of color make up approximately 1 percent of ownership in the craft brew industry. To this end, we have teamed with Holyoke Community College to create a scholarship for their brewing program. The financial aid will help people of color break into the industry that is far underrepresented. We hope you enjoy this beer with open minds and open hearts."

"We are very excited about the pipeline of talent that this scholarship program could generate while also helping to break down barriers, open doors, and hold them open for people of color in our community," said Katie Stinchon, executive director of the Mass Brewers Guild. "As an industry we are very aware that the makeup of our brewery owners, staff and consumers are predominantly male and pale. This is a great step to work to change that, and something that can be emulated in other regions and institutions across Massachusetts. "

The scholarship, as yet unnamed, will be administered by the HCC Foundation.

"Every scholarship tells a story about why someone feels it's important to give back, or what they hope to make possible with the establishment of the fund.," said Amanda Sbriscia, HCC vice president of Institutional Advancement and executive director of the HCC Foundation. "The scholarship that will be created as a result of this brewery partnership is so powerful because it's all about creating opportunity, and it's a real example of people coming together to create positive change. HCC students can see themselves in each of these business owners and realize that they, too, can chase and achieve their dreams."

Sbriscia joined Berry, Eldridge, Merritt, and Cruzeau on Thursday, March 11, at the White Lion Brewery in Tower Square in Springfield for the one-day brewing of "As One." Canning is scheduled for Monday, March 29. The beer will be available starting Wed., March 31, during White Lion's weekly "Cans to Go" sessions at the brewery, which run every Wednesday from 4-7 p.m., and every Saturday, from noon to 4 p.m.

"Springfield has a lot of diversity, so it's great that we're doing this in the heart of Springfield," said Eldridge. "A lot of people of color, they're gonna be like, oh, damn, look at these guys here, just like me. They're pumping out beer and working together for something like that."

Although the batch is small, the goal is to make the brewing of "As One" a special, annual event that will continue to seed the scholarship fund at HCC over the years.

See photos from 'As One' canning day in our Facebook photo album ...