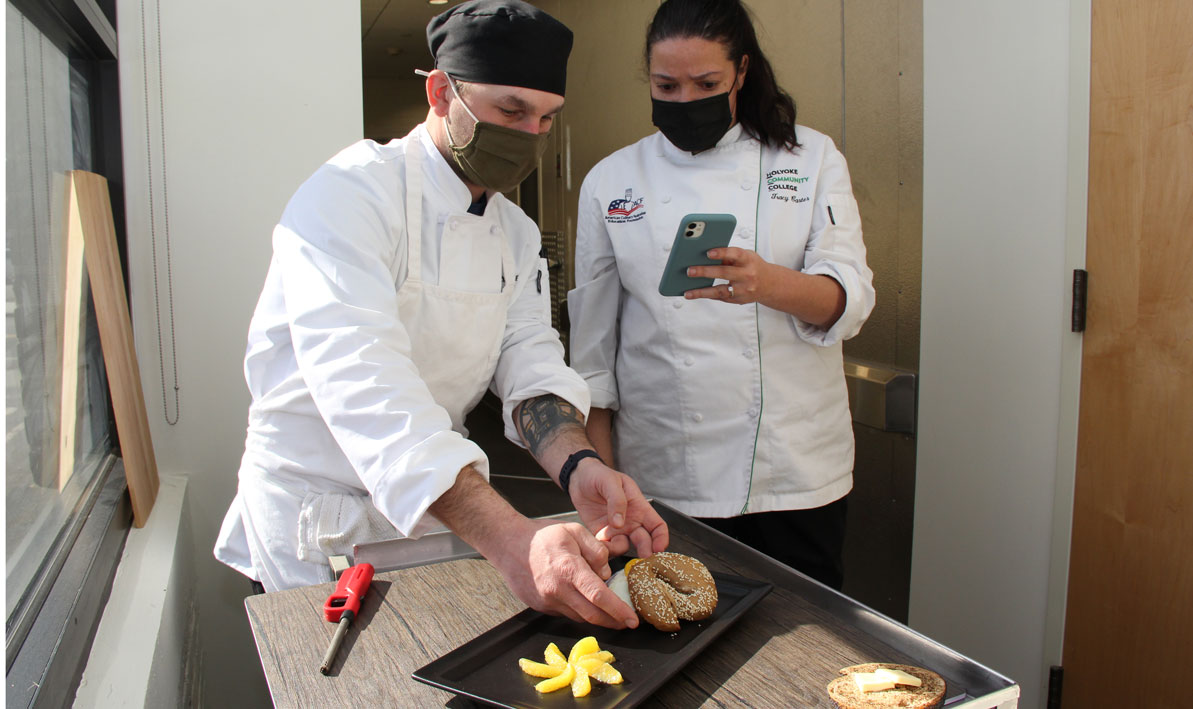 In one course running this semester at Holyoke Community College, student chefs are learning to prepare concoctions no diner would ever want to consume.

During their first week, for instance, students made ice cream out of shortening sprinkled with black pepper. More recently, they used soy sauce and dish soap to "brew" coffee to accompany their bagel breakfast sandwiches.

"The ice cream really blew my mind because it looked so realistic," said student Maggie Ehrlich.

In most culinary arts classes, presentation is emphasized as much as flavor. But in Chef Tracy Carter's Food Styling course, flavor isn't important at all; only looks matter.

Food styling is a culinary arts specialty in which chefs prepare menu items to look mouthwatering in photographs for use in advertising or to illustrate cookbook recipes.

"I don't necessarily expect my students to become professional food stylists," said Carter, "but I want them to be able to market themselves after graduation. What better way than to have them create a nice-looking portfolio of images of the food that they cook?"

Carter, who grew up in Springfield and now lives in Chicopee, understands the craft. She is a professional food stylist herself and spent years as a stylist and culinary producer at the Food Network, where she worked behind the scenes on competitive cooking shows such as "Chopped" and "Beat Bobby Flay." Her recent food styling work is showcased in "More Veggies Please!" a cookbook by chef and TV host Nikki Dinki published by BenBella Books in October 2021.

"When you're illustrating a certain recipe, you've got to make that recipe shine," said Carter during one of her classes at the HCC MGM Culinary Arts Institute.

"I'm teaching my students to look more closely at their food," she said. "They may never have paid attention to the way the cream cheese is smeared on a bagel before, but it makes a difference when you're taking a photo of it. We're just learning to pay attention to the elements we can control to make food look just a little bit better."

To be fair, not everything is inedible, but the insider tricks food stylists use to prepare items for photos can make some unpalatable. Shortening, for one, is a practical substitute for real ice cream. ("It doesn't melt and we can manipulate it for the camera," she said.) A sprinkle of black pepper adds the illusion of vanilla bean. Corn syrup mixed with food coloring provides an inexpensive alternative to maple syrup. Soy sauce is a quick substitute for black coffee, and dollop of dish soap gives it froth for a faux cappuccino.

"I use a clothes steamer to melt cheese because the moisture of the steam keeps the cheese looking nice and moist," she said.

Preparing fried eggs is a multi-step process that involves cooking the albumen first and then adding the yolk on top so it sits high, followed by a dousing of non-cook spray and placement on an egg mattress made from tightly stretched plastic wrap for later use.

"The class has been extremely eye-opening," said Ehrlich, who lives in Holyoke and will graduate from HCC in June with her associate degree in culinary arts. "To have this in our arsenal, so to speak, is an extra perk."

Carter's students, all in their final semester, have  learned how to style hot and cold beverages and slices of cake with other classes planned focusing on crème brulée, poached eggs, and a full bakery with decorating props.

"For the final, they'll have to prepare a breakfast spread," she said. "A stack of pancakes, a fried egg, bacon or meat of some sort, and a drink – all the things we've done in the course."

During one February class, students prepared bagels donated by Standard Bagel, an Easthampton-based startup. "I want to support local businesses who might not have a budget for marketing," Carter said. "So we ask them to donate some products, and we take some promotional shots for them. This way the students also get to learn how to work with a client."

Students started by setting up the fresh bagels in different configurations, whole and then stacked, and then styled their breakfast sandwiches. They browned bagels using a butane torch. Some added fried eggs, others meticulously added cream cheese, lox and capers, and then placed the finished items on a black tray or wooden carving board.

"I don't touch their food," said Carter. "This is their art, their vision, and this allows them to be creative."

The final products were placed on a serving cart and wheeled out of the kitchen and into their photo studio – a hallway with vast windows that provide dramatic natural lighting.

"We pray to the sun gods every week," Carter said. "We have a ring light that we can use but nothing showcases food better than sunshine."

STORY and PHOTOS by CHRIS YURKO: (Thumbnail) Chef Tracy Carter snaps a photo of an assembly of bagel sandwiches in her Food Styling class at the HCC MGM Culinary Arts Institute. (Above) HCC culinary arts student Kyle Rondeau of Easthampton sets up his bagel sandwich for a photograph as instructor Tracy Carter looks on.