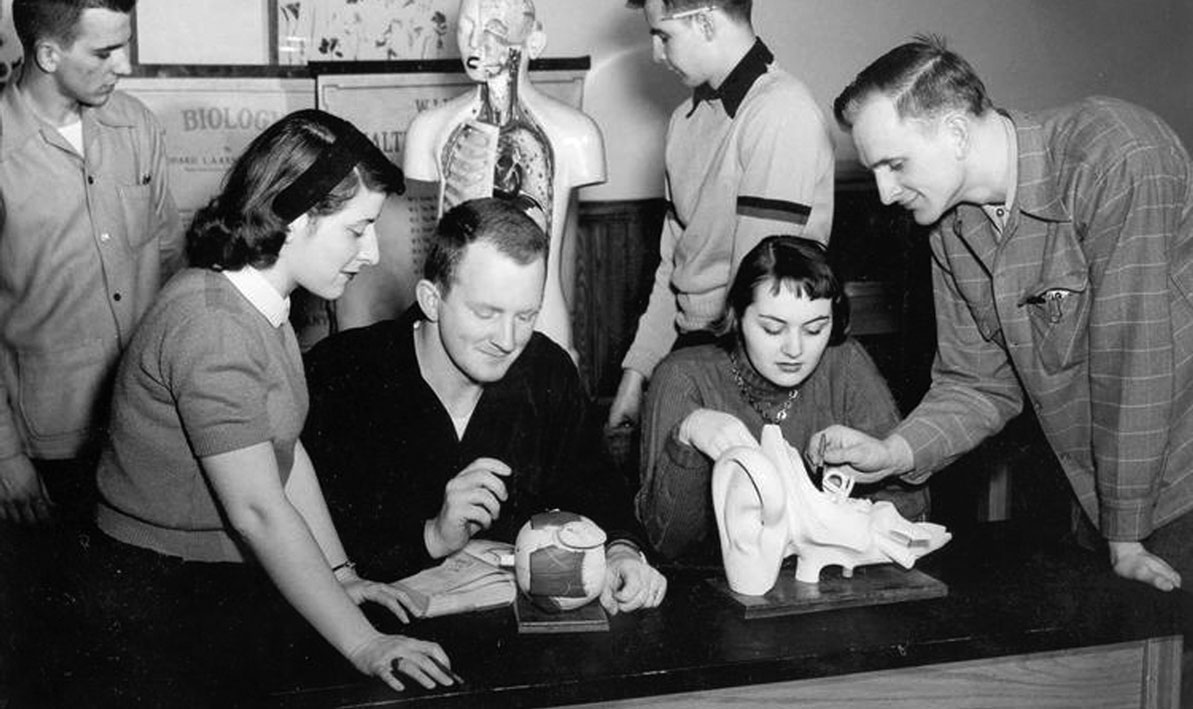 Editor's Note: This story was published on Page K10 in the Feb. 20 edition of the Springfield Republican's Outlook 2022 section and on Feb. 23 on Masslive under the headline, "Holyoke Community College celebrates 75th year as trailblazer"

By RON CHIMELIS
Courtesy of the Springfield Republican and MassLive

HOLYOKE – Not only can the origin of the Massachusetts community college system be found in Holyoke, but the history of Holyoke Community College predates even the concept itself.

"We existed before community colleges were even enacted. Our early roots speak to the innovation we represent today," said Christina Royal, the president of an institution marking 75 years of educating a remarkably diverse range of students.

Royal is just the fourth president of a college whose founding director, George E. Frost, served from 1946-75. Much credit for the college's growth has gone to David M. Bartley, a former Massachusetts speaker of the House who followed Frost as president, and used both his political strength and educational zeal to set HCC on its modern course.

A 75th anniversary celebration is planned for May 5, "dependent on things (with the COVID-19 pandemic) moving in the right direction," Royal said.

When it began, HCC was hardly the institution it is today. Its 1946 beginnings as Holyoke Graduate School, later Holyoke Junior College, came more than a decade before the Massachusetts community college system was formally created between 1958 and 1960.

"We did not have our own faculty, so we had professors from Smith College, Mount Holyoke, University of Massachusetts, American International, Springfield College, Westfield State and Amherst College," said 1958 graduate Margaret "Peg" Wendlandt, who, with her husband, Gary, has been a major donor to the school.

"Those professors were looking for a little extra money, so we were lucky. We got the best and the brightest," said 1956 graduate Francis M. Kane, a former trustees chairman who still serves on the HCC Foundation board of directors.

The school also lacked a physical structure. "We went to school in the late afternoon or early evening at Holyoke High School," Kane said.

By 1968, Holyoke had a new high school and college used the former building. But on Jan. 4, 1968, it burned to the ground, causing students to take classes at various locations while the city successfully scrambled to keep the college in Holyoke – and, by 1974, open a new campus.

For many whose connection predates those transformative years, Holyoke Community College remains special.

"My older brother had gone to Holyoke Junior College. My grandmother and uncle lived at 96 Beech St., and I could walk there," Wendlandt recalled. "I had graduated from high school and had a job as a long-distance telephone operator for New England (Telephone and Telegraph Co.). They had maybe 200 of those, a dozen supervisors and one chief operator, and I didn't see much of a future there, so I decided to go to college."

By July, it was too late to apply for other schools. With Frost's encouragement, Wendlandt chose the college down the street.

"I loved it. I blossomed there, if you will, and went on to UMass and then to work at MassMutual," she said.

Wendlandt's husband did not attend the college, which adopted its current name in 1964, but he has become a partner in supporting it.

"The path to success for any institution is when the people who have had success, like my wife, give back," he said.

Royal's 2017 arrival came as community colleges continued rising, not just as affordable avenues for a two-year associate degree, but as a pathway to four-year colleges, the workforce and lifelong learning. Royal said old perceptions of limited scope linger, but progress is being made.

"We think of the front end (of learning), but HCC is also a launching pad. Our alumni include successful doctors, attorneys, leaders of nonprofits and other critical careers. The strength of any college is what its students contribute to the world," Royal said.

"There is still some stigma to community colleges as a last resort, but we are much more – a first option," Royal said.

From 1964-75, Holyoke had rare political influence, with either Bartley serving as speaker of the House or fellow Holyoker Maurice A. Donahue as Senate president – and for a brief time, both at once. Kane credits both for fueling HCC's modern transformation, with particular praise for Bartley, whose 29-year run as HCC president ended in 2004.

"This year has been the 75th year of both the Boston Celtics and HCC. Red Auerbach built the Celtics, and David Bartley was the Red Auerbach of HCC," Kane said. "Among many achievements, he started the college's foundation from scratch, and it's still helping students today."

Kane was the first of three generations of his family to use Holyoke Community College (still known as Holyoke Junior College in his day) as launch points to four-year colleges. Royal said that transfer path is one of many options the college affords today.

"Community colleges educate the entry-level job force. They have been gaining recognition and respect for their success with preparedness and as a key engine in workforce development," she said.

Royal's tenure has been marked by innovation. She says the college's mission is to provide opportunity for all categories of racial, ethnic, economic and sexual identities. Adult learners, and those with unique job or family demands, are similarly welcomed, she said.

Of the current HCC population, Royal said 12% have documented disabilities. The door is kept open for their success as well, she said.

When the COVID-19 pandemic prompted campus closings in March of 2020, HCC was well-positioned because Royal had advocated flexible learning platforms for 20 years. She said in-person education remains important but that online options will remain accessible, up to date and of high quality, long after the pandemic has ended.

"We still educate a lot of first-generation college students who don't have family they can talk to about college," said Royal, who added the school is working to meet the differing needs within its student population.

Adult students might be more interested in knowing how to navigate the worlds of investment or purchasing, she said, while younger learners might emphasize issues of social justice. She also said the traditional step-by-step growth path from high school to college, and then to the workforce, is giving way to more "intersectionality," and overlapping of steps – and that HCC must meet those changing needs.

"The advantages of access and affordability have been drilled into people's minds, and we offer that but much more," Royal said."Many students ask themselves, is college even possible? What we offer is that anything is possible. If your desire is to attend a prestigious four-year school, you can start here and finish anywhere - anywhere."

PHOTOS from the HCC archives: (Thumbnail) HCC's first president, George Frost, stands by the main college sign for Holyoke Junior College after the name was changed from Holyoke Graduate School in 1947. (Above) Students study anatomy in a science lab.