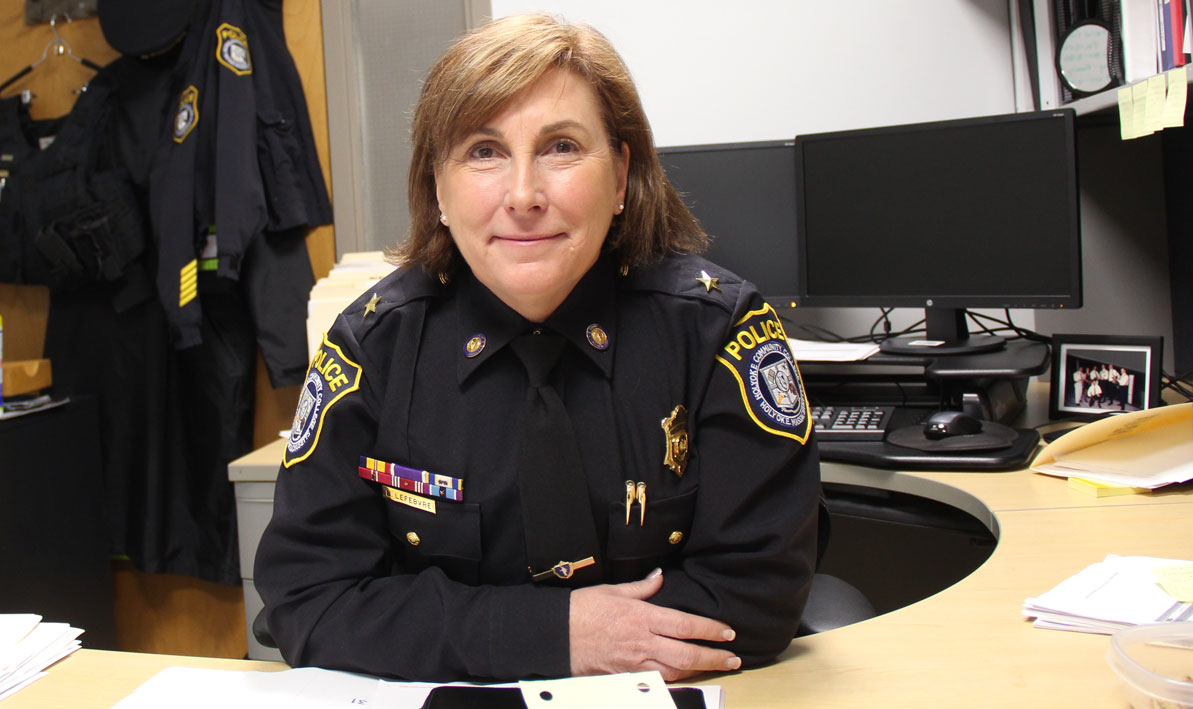 On her first night as a young cop, Laura Lefebvre was called aside by a sergeant who said she was replacing a male officer who needed to feed his family and that she should go back home to the kitchen where she belonged.

At the time of her hiring in 1986, Lefebvre was one of only four women on the 450-person Hialeah Police Department in Dade County, Florida, a status quo many would have preferred remain.

"Nothing personal," said another male officer in her squad, "but women don't belong as patrolmen."

He advised her to go work as a matron in juvenile detention. Later, that same officer became chief of police, and he apologized.

"He told me he was wrong," said Lefebvre. "I proved him wrong."

Lefebvre (pronounced Le-fave) would become the first woman assigned to the robbery division at Hialeah; more recently, she was the first female sergeant in the campus police department at the Massachusetts College of Liberal Arts in North Adams.

And now she is the first woman to serve as chief of police at Holyoke Community College. She started Jan. 8.

"I'm not unaccustomed to being the first woman," she said. "There's a lot of firsts under my belt."

Lefebvre, 56, is a seasoned investigator with more than 30 years of law enforcement experience. Before being hired as HCC's director of Public Safety, she served for five years as staff sergeant in the MCLAPD, second in command.

"I was very happy at MCLA," Lefebvre said. "I worked for a brilliant chief. We did some great things together to move the department along."

In Florida, Lefebvre worked in the juvenile sexual battery unit investigating child abuse cases before going to the robbery division. She later moved into homicide as a detective during the lively era captured in the hit TV series "Miami Vice."

"We didn't drive great sports cars and we didn't dress really well, but that was the time," she said. "Miami was crazy and fast. The drug trade was high. There were a lot of homicides."
On her office desk, from those days, there is a group photo of Lefebvre and her fellow officers posing like gangsters. She's wearing a sundress and holding an AR-15.

"I knew I didn't want to sit behind a desk," she said, explaining her choice of careers.

Although she does a lot of desk-sitting now – "I'm not looking for the adrenaline rush anymore" – Lefebvre had her share of close calls on the streets in Florida. She was once stabbed in the back and neck with hair-cutting shears ­(and bitten in the face) during a SWAT team raid on a fugitive's hideout.

"I broke my hand. I've evacuated burning buildings. I've been in car accidents and air-lifted. I've had all this stuff," she said.

That's not to mention frequent "armed confrontations" – shootouts – including one just two weeks before she took an early retirement from Hialeah in 1999.

One of her most memorable cases from those days was recounted in an episode of the true-crime documentary series "Forensic Files." In "Tourist Trap" (Season 8, Episode 6), Detective Lefebvre explains how she used bite mark evidence to help convict a man who had carjacked and robbed two German tourists at Miami International Airport, one of a rash of such crimes at the time. It was a pioneering case.

Lefebvre retired from the Hialeah in 1999 and moved to Worthington, Mass.,  with her husband, Gary, a Granby native and also a retired police officer, and their two young children, Spencer and Emily, now adults.

Up north, she spent a few years as an officer with the Hadley Police Department and a police lieutenant at Westfield State University. Before going to MCLA, she worked for 11 years as a fraud investigator for the National Insurance Crime Bureau and the insurance giant Unum.

She is a big proponent of community policing, and throughout her career has been a field-training officer, teaching at police academies in Florida, Massachusetts, New York and Vermont.

She holds a bachelor's degree from MCLA in interdisciplinary studies in business and sociology and will complete her master's degree in education at MCLA this May.

"I'm a big advocate of professional development," she said. "We should be learning constantly. I'm a lifelong learner. Everybody should be."
PHOTO by CHRIS YURKO: Laura Lefebvre