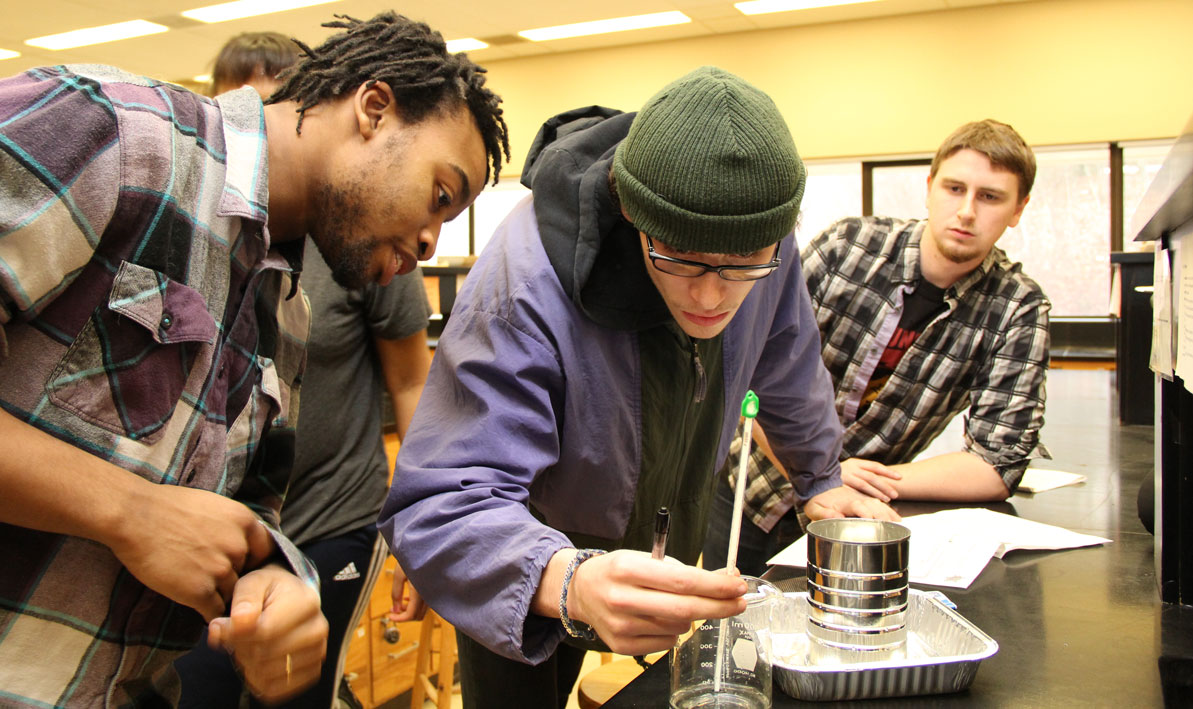 When Holyoke Community College English professor Elizabeth Trobaugh heard a piece on National Public Radio about an emerging genre of science fiction dealing with climate change — "cli-fi' for short — she knew it was a perfect fit for a Learning Community class like one she and environmental science professor Steven Winters have co-taught before called "Alternate Worlds" that looked at the real-life foundations for science fiction.

"Cli-fi is the ideal intersection of literature and science," she said.

The result is this semester's "Cli-Fi: Stories and Science of the Coming Climate Apocalypse," part of a national trend where more and more colleges are now offering classes about the growing Cli-Fi genre in movies and novels.

The HCC course combines Introduction to Literature and Topics in Science and consists of six hours of class time each week plus a two-hour science lab.

"The science they're practicing is deepening their understanding of the literature and climate change in general," Trobaugh said.

Students recently read Paolo Bacigalupi's The Windup Girl, set in a dystopian future in Bangkok, Thailand, where climate change has caused the temperature to soar. Oceans rise 18 feet above sea level, and viruses from genetically modified foods devour victims. Oil peaked ages ago, and the source of energy is measured in tightly regulated calories that form the basis of the economy.

This set the stage for a discussion about the science of calorie counting as a measurement of heat, and a lab in which students burned various foodstuffs and measured their output with calorimeters they constructed. Winters brought in rice, cheese puffs and marshmallows; they also set aside one bagel from the bag-full that Trobaugh brings every Thursday morning.

They have also extracted DNA from strawberries to better understand the genetic manipulation in the story. And they used the web application Google Earth to simulate the rise of water and see which areas of Bangkok would be most affected.

Climate-change fiction dates back to The Drowned World, a 1962 novel by J. G. Ballard, but novels in this genre have increased in the past 10 years. And the settings are not necessarily in the future but more often the present, such as Barbara Kingsolver's Flight Behavior, Ian McEwan's Solar, and Nathaniel Rich's Odds Against Tomorrow, whose cover depicts the Manhattan skyline partially submerged in water.

Climate activists like blogger Dan Bloom, who coined the term "Cli-Fi" in 2008, view climate fiction as one possible way to move people to action more effectively than scientific data projections.

Bloom, who exchanged emails with Trobaugh about the HCC class and wrote about it on his blog, called it "a model for other community colleges nationwide to follow."

"This kind of combination class where students read and discuss climate novels and also take part in science labs gives them a chance to use both their EQ (emotional intelligence) and their IQ in coming to grips with a warming world and future impacts of global warming," he wrote in an email.

Trobaugh and Winters were also recently interviewed about the class by an international reporter working for Reuters in London.

Other readings include I'm With the Bears: Short Stories from a Damaged Planet, edited by Mark Martin, The Sixth Extinction: An Unnatural History, by Elizabeth Kolbert, and Environmental Transformations: A Geography of the Anthropocene, by Mark Whitehead.

According to the course description: "Classroom studies will be augmented by guest speakers, films and frequent field trips to museums and important geological sites that can help us understand the nature of climate and climate change on Earth."

As a final project, students will write their own cli-fi short stories.

The class recently watched an extended version of the 2009 James Cameron movie Avatar set on the planet Pandora and humans' attempts to mine it at the expense of an indigenous people called the Na'vi.

"It's interesting to read a novel where we're presented with these ideas and look at the science behind it," said Benjamin Meck, a second year liberal arts major from Northampton. "It fosters more of a connection with the writing when you can see it."

Trobaugh said that rather than depressing students, Cli-Fi energizes them.

"We might be creating some environmental activists," she said. "Or maybe they will become business people who create green energy."

At the very least, the course is opening up young minds to new ideas.

"We're learning about things that are happening now that are having an impact on the environment," said Catia Correia, a first-year student from Amherst. "Now I'm more aware of what I use."

PHOTO by CHRIS YURKO: Jhaydan Sheftall, Dylan Kelly and Connor Jacoby build a calorimeter for an experiment in the Cli-Fi class lab.