College at a discount

The state's 'Commonwealth Commitment' promises thousands in savings on the cost of a college degree. 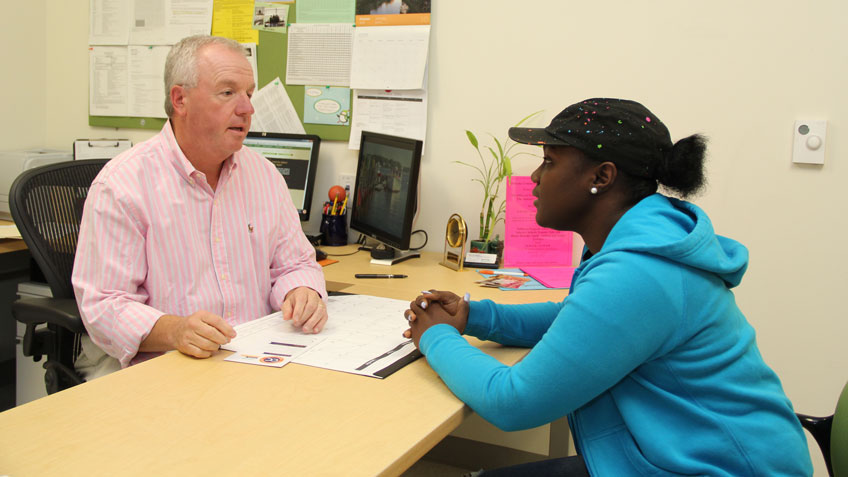 For Devon Siefken, signing up for the state's new Commonwealth Commitment program was a no-brainer.

The 18-year-old student from Easthampton had already earned nine college credits while she was in high school. She knew she wanted to study psychology at HCC and then transfer to the University of Massachusetts.

For a motivated community college student like her, intent on earning a bachelor's degree at a four-year state school, the Commonwealth Commitment promised a freeze on tuition and fees at HCC, a tuition waiver and fee freeze at UMass and a 10 percent cash rebate each semester — an estimated cost savings of $6,640 over four years.

"I got an email about it, and it just seemed to fit everything that I wanted to do," Siefken said. "I was immediately like, Oh, my gosh, I have to get an application for this."

Siefken was one of the first students at HCC to sign on to the Commonwealth Commitment. Filling out the two-page application took about two minutes, she said.

The application is available through the Commonwealth Commitment page on the HCC web site and in the ACT Center in Frost 273. By signing on to the Commonwealth Commitment, students agree to complete their associate degree at HCC within 2½ years, transfer to one of Massachusetts' state universities, and complete their bachelor's degree within two more years. They must maintain full-time, continuous enrollment and a cumulative GPA of 3.0. They must also sign up to participate before earning 15 credits (including developmental credits).

For her participation, Siefken's tuition and fees at HCC will be locked in at Fall 2016 prices; she will receive a complete tuition waiver at UMass (through the MassTransfer program); her fees at UMass will also be locked in at Fall 2016 prices; and she will receive a 10 percent cash rebate on tuition and fees at the end of every semester.

"I am excited about it," said Siefken. "I think it'll be good for everything I want to go into. It'll help a lot."

This semester, her first at HCC, Siefken is taking four classes: Human Biology, Adolescent Psychology; Statistics for Psychology; and Painting. She said she's not worried about maintaining a 3.0 GPA.

"I consider myself a pretty good student," she said. "I've always had good grades, honor roll, National Honor Society, and so I knew that I could do that."

While only a handful of HCC students have signed up for the Commonwealth Commitment so far, many more could potentially qualify. Hundreds of HCC students each year transfer to UMass and Westfield State alone.

"UMass and Westfield are out top two schools for transfer," said Mark Broadbent, HCC Transfer Affairs coordinator, "so for the right student, it's an excellent opportunity to save a lot of money on the cost of their bachelor's degrees."

STORY and PHOTOS by CHRIS YURKO: (Top) HCC Transfer coordinator Mark Broadbent, left, talks to first-year student Keondra Lafortune about transfer options in his office in the ACT Center. (Thumbnail) HCC student Devon Siefken was one of the first HCC students to sign on to the new Commonwealth Commitment.