The CommITTED Club is the only HCC student club devoted entirely to service learning. 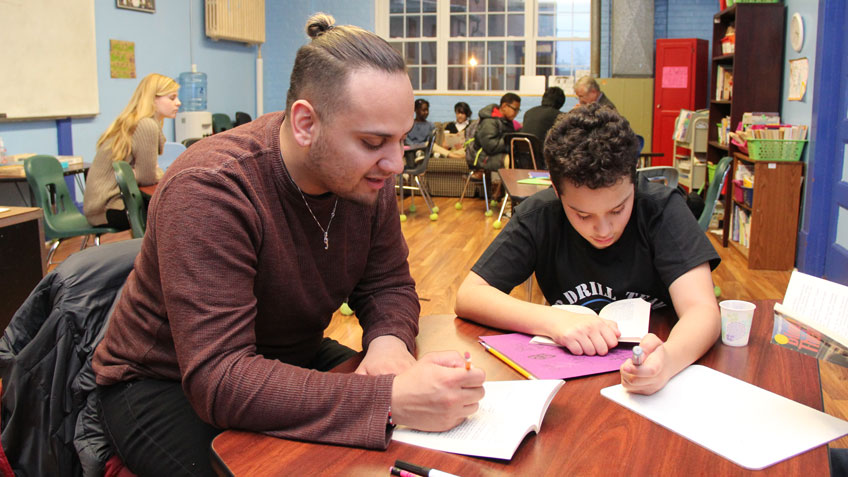 As part of their charters, all HCC student clubs must perform some kind of community service project each semester. To fulfill that requirement, clubs often organize fundraisers, like bake sales, and donate the money to a local charity.

Only one HCC club, though, has a mission devoted entirely to community service, its members united solely by their desire to work with community groups.

That would be the CommITTED Club, and that's how they spell it.

"I enjoy helping others and helping the community," said Jonathan Mendez, one of the club's founders and the current vice president. "It feels really great to do something, so I thought this was the perfect opportunity to get involved on and off campus."

The CommITTED Club is one of the newest student clubs at HCC. It was started in September 2015 and just completed its third semester.  See photo gallery on Facebook.

The name stands for "Community in training to educate" and summarizes the club's purpose as a service-learning group, says club advisor Myriam Quinones.

Of the club's initial 17 members, about half were international students who wanted to learn about the surrounding community, and in particular Holyoke, said Quinones, who is also the coordinator of HCC Multicultural Academic Services.

During the 2015-2016 academic year, club members spent several afternoons each week working at the Holyoke Senior Center, providing tech support to seniors struggling with their computers, cell phones and social media applications, like Facebook.  Over the summer, the Holyoke Cultural Council awarded a grant to the club for a city art project. Club members painted the first utility box in downtown Holyoke with scenes from the city's storied history. To get ideas for the project, they toured the city, visited the dinosaur tracks and climbed some of the local summits to get a view of the city from above.

"They have become so interested in the history of Holyoke that we continue to do work in Holyoke," Quinones said.

Club members also helped survey city residents as part of a Positive Attitude Map project (PAM) run by the University of Massachusetts.  For the Fall 2016 semester, the club focused its attention on Homework House, a free afterschool program in downtown Holyoke. For their fundraiser, club members collected school supplies that they donated to Homework House. They have also been volunteering there as tutors several afternoons each week.

One recent December afternoon, Mendez was taking turns reading paragraphs from a book called Blood is Thicker with Jahdiel Rosario, a seventh-grader from Holyoke's Peck Community School.  On the HCC campus, Mendez, a music major, is a busy man. He's a student senator, a founder of the Musical Expressions Club, a frequent vocal performer, and the designated emcee at most campus events, such as the monthly Performance Hour in the college cafeteria.  But the CommITTED Club gives him something he doesn't get from his other campus activities, he says.

The service-learning projects, specificaly the frequent visits to Homework House and the senior center, coupled with recreational bus trips to places like New York City and Salem, Mass., have really helped the club members build a strong bond.

"I'm connecting with people in a different way," he said. "I think what really works is that we all get along together, and we're able to accomplish tasks with one another — gracefully."

That's been true for Desiree Reyes as well. The 19-year-old Holyoke resident, who is majoring in pre-vet and animal science at HCC, said she was reluctant at first to get involved because she was so busy with her classes. The CommITTED Club is the only club she belongs too and now can't imagine her life without it.

"It's been an awesome experience, cause I like helping people," Reyes said last week at Homework House where she was working with seventh-grader Graciliana Marquez. "It's also a lot of fun. We're like a little family."