'A big change for me' 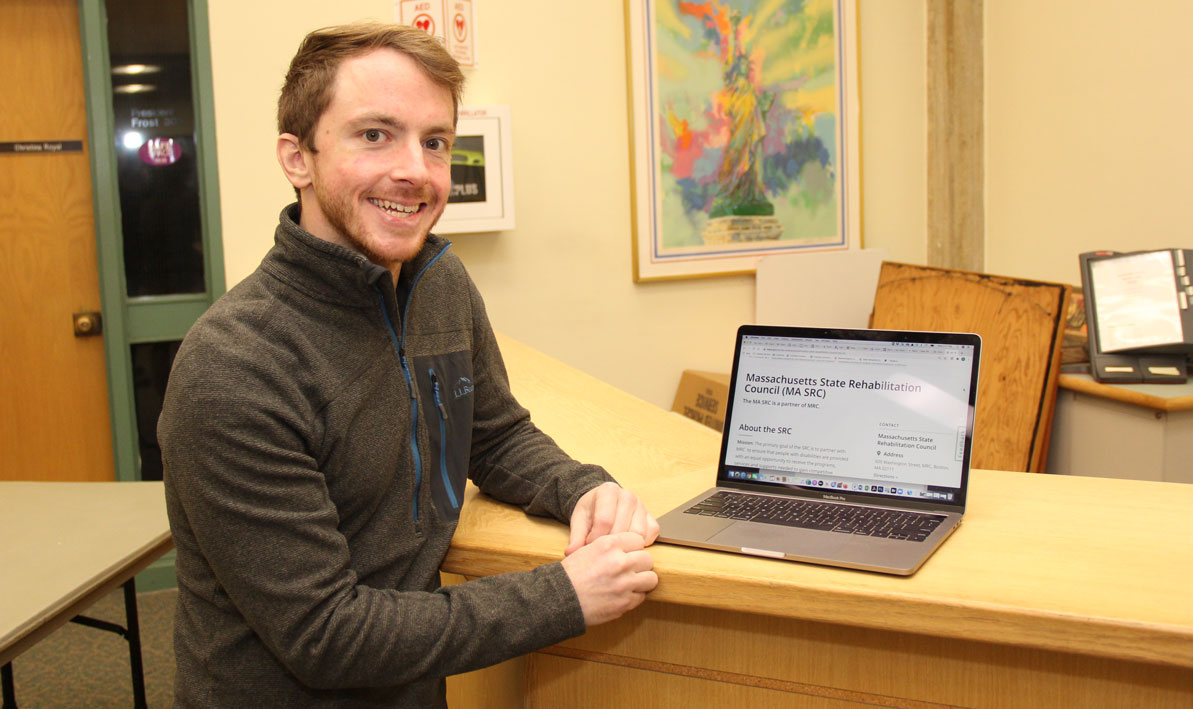 Not long ago, Aidan Burke was working in a local supermarket, making pizza for minimum wage. It was not a job he believed held much promise for him.

Life has changed a lot since then for the 29-year-old Northampton resident.

In February, Burke started a free, intensive cybersecurity training program for people with disabilities offered by Holyoke Community College and the Massachusetts Rehabilitation Commission. Ten months later, he is now poised to begin a career as a cybersecurity analyst.

"I liked working at Big Y and I could pay my bills, but there was nothing I could really do with that," he said. "Now I'm looking at positions that have salaries and benefits. That's a big change for me. It's fantastic. This class has just opened so many doors. It's life-altering or at least has the potential to be."

Already, Burke has started an internship with NetWerks Strategic Services, an Agawam-based technology company. In recent weeks, he has interviewed for full-time benefitted positions at the Massachusetts Educational Collaborative and the Dept. of Youth Services. He is also a candidate for a summer internship with MassMutual.

"The opportunities are just so much bigger and better than what I had before," he said. "I was kind of floundering a bit in terms of direction in my life, and now I have an opportunity to move up in the world."

Burke and his 14 classmates completed the Cisco Academy Cybersecurity Training program on Dec. 10. They graduated Dec. 18, having passed their exams as Cisco Certified Network Associates and Cisco Certified Cyber-Operations Associates.

"Mass Rehab has been very happy with the success of the students academically," said Kermit Dunkelberg, HCC assistant vice president of Adult Basic Education and Workforce Development. "Ultimately, the goal is to get them placed in jobs, and we're very optimistic because these students are very well prepared."

The HCC-MRC cybersecurity training program was the first of its kind in the state. Based on the success of the pilot, MRC initiated a second progam in September in collaboration with Roxbury Community College and has begun recruiting for a second class at HCC that will begin in February.

"Together we are re-envisioning employment and people's lives," said MRC Commissioner Toni Wolf. "In the wake of COVID-19, our perspective on what is possible for remote work is expanding on a daily basis, particularly how resilient and adaptive people with disabilities are and the transformative thinking on the future of work. These Cisco certifications are nationally recognized and highly sought-after workplace credentials that will give these students the needed leverage to enter a high paying industry."

For the first month of training, classes met in the cybersecurity lab in HCC's Kittredge Center for Business and Workforce Development. In March, though, they moved onto Zoom as COVID-19 forced a shift to remote instruction. HCC and MRC provided laptops for students to use at home, and Cisco provided access to online simulation platforms that mimicked the "hands-on" parts of the training.

"There were many challenges, all overcome," said HCC professor Dalip Singh, a Cisco-certified cybersecurity instructor. "We modified everything we were doing many times. The students were all very dedicated and hardworking."

Students qualified for the program through their involvement with MRC. Burke was recommended by his caseworker. Candidates were screened and then took an entrance exam to make sure they could handle the material and the workload.

Classes met four days a week, Monday through Thursday from about 9:30 a.m. to 3 p.m. Singh said the students were also required to put in several hours of additional self-study on Fridays.

Given today's reliance on computer technology and remote access to internal networks during the pandemic, the cybersecurity field is more important than ever, said Singh.

"Cyber crime is up 600 percent due to the pandemic," HCC president Christina Royal said Friday during a graduation ceremony held over Zoom. There are a lot of bad actors looking to exploit network vulnerabilities with costs estimated at $6 trillion in 2021. Cybersecurity is an important area that companies are neededing and investing in."

Program graduates qualify for jobs as tier 1 cybersecurity analysts. Although that is considered entry level, they can still expect to earn between $25 and $35 an hour to start and up to $80,000 to $100,000 or more a year as they advance.

"Most of the times they will be working in an IT department as part of a team of cybersecurity experts," said Singh. "They could be employed by a cybersecurity company that provides services to customers."

Beyond the training itself, students in the program received a $200 stipend for general expenses, career counseling and assistance with job placement.

Like many of his classmates, Burke has struggled with a number of issues, including anxiety as well as depression, PTSD, and ADHD. "Just a tough combination of things," he said, that made it tough at times just to get out of bed in the morning.

"I didn't feel motivated, because I didn't have a goal," he said.

"This class helped a lot with that," he said. "I felt I really had something to do that was going to help me."

Burke said he's grateful to Mass Rehab for recommending him for the program and for putting him in a class with others who shared and understood his struggles. It was a big confidence builder for all of them.

"People with disabilities don't necessarily get the same opportunities as others," said Burke. "There's a stigma to it, and Mass Rehab is out there trying to erase that and show that we have value. That's what I really appreciate about them. They don't care about our labels and what's happened in our past. They just want to get us into a position where we can be fully functioning members of society and feel more useful."

"It's certainly happening with me," he said, "and it feels great."

STORY and PHOTO by CHRIS YURKO: Aidan Burke, of Northampton, a student enrolled in a cybersecurity program sponsored by HCC and the Massachusetts State Rehabilitation Council.