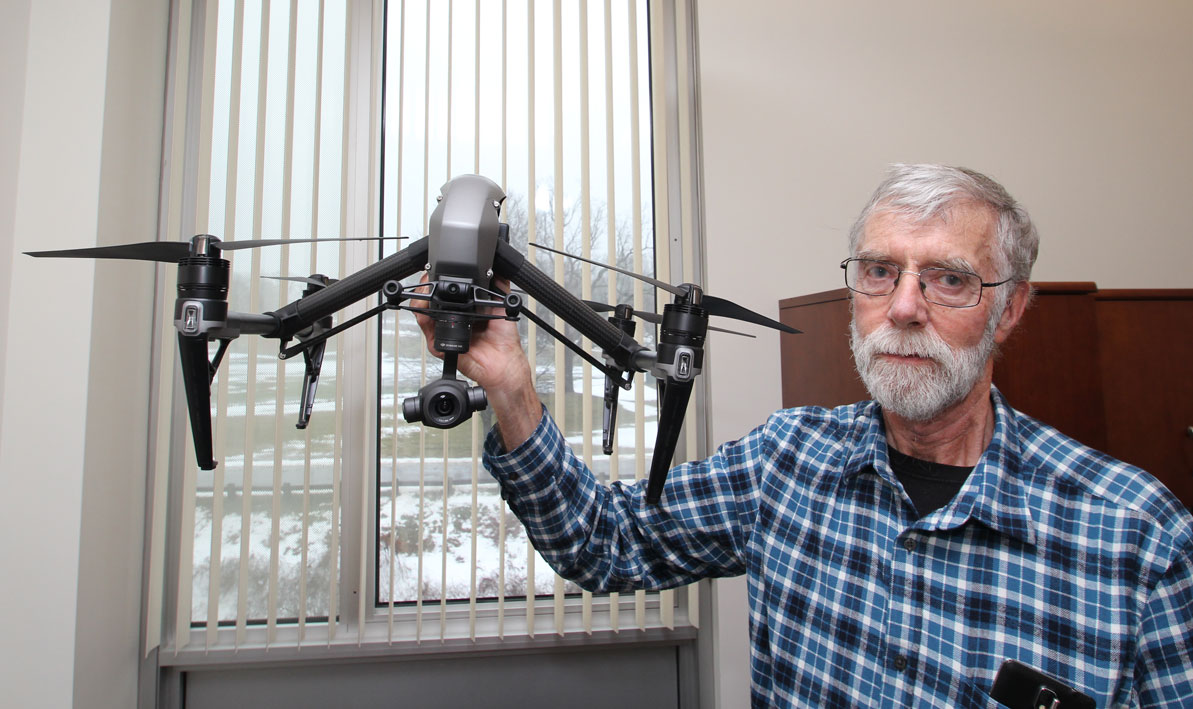 The CIA recruited Larry Harmon right out of college. First they put him in the Army Reserve. Then they put him to work analyzing satellite images at the National Geospatial-Intelligence Agency, at the time a CIA subsidiary.

That was after the Cuban Missile Crisis, more than 50 years ago.

"I was in tactical," he said. "We're talking Vietnam. That kind of got me started, but I always ended up trying to find ways to use the technology we had in the intelligence agencies for public service."

Harmon went on to start the GeoGraphics Lab at Bridgewater State University, concentrating on the emerging consumer applications of GIS technology.

These days, though, as co-director, he focuses on drones. His specialty, as both an educator and private consultant, is aerial imagery and analytics.

Harmon will bring his vast experience to Holyoke Community College beginning April 28 for a new course, "Flying Drones for Profit, Public Safety, and Commercial Applications." The hands-on class will prepare individuals to take the FAA Remote Pilot in Charge exam, which they must pass to become licensed drone operators.

"You have to understand everything the FAA needs you to know about flying a drone, what the rules are, how you fly legally and how you fly safely," Harmon said during a recent campus visit.

The six-week, noncredit course meets on Saturdays 9 a.m. to noon from April 28 to June 2 and costs $349. Space is limited. Participants can bring their own drones but do not need one to take the class.

The lecture portion of the course will meet in the HCC Kittredge Center for Business and Workforce Development on the main campus at 303 Homestead Ave. Students will fly drones outside, nearby, either on the college baseball field or soccer field.

"The class is really designed to help folks study, prepare and pass the FAA license exam," said Ken White, HCC dean of Community Service. "Larry is the expert in New England on this."

HCC is the first college in western Massachusetts to offer a drone pilot course to the general public, White said, and may be only the second in the entire state. Bridgewater State University offers a semester-long credit class as part of its Aviation Science program, Harmon said.

Harmon and White expect the course will appeal to professionals in a wide range of industries including engineering, construction, insurance, agriculture, emergency services, public safety, security, environmental management, transportation, and retail as well as those involved in more artistic pursuits like movies, video and photography.

What broke the industry open, said Harmon, was the release of the DJI Phantom, a "prosumer" model that produced professional-grade photos and was sold in stores like Best Buy.

The technology, Harmon said, has advanced way beyond what he used to look at during his time working for the government.

"This is the fourth generation of it," Harmon said, holding up a DJI Phantom IV. "This is what we'll be training with. This thing has better quality than satellites."

PHOTOS by CHRIS YURKO: Larry Harmon, co-director of the GeoGraphics Lab at Bridgewater State University and an FAA certified Remote Pilot instructor, holds up a DJI Insight 2 drone during a recent visit to campus.