Four of the seven Dubchak siblings have already graduated from HCC. 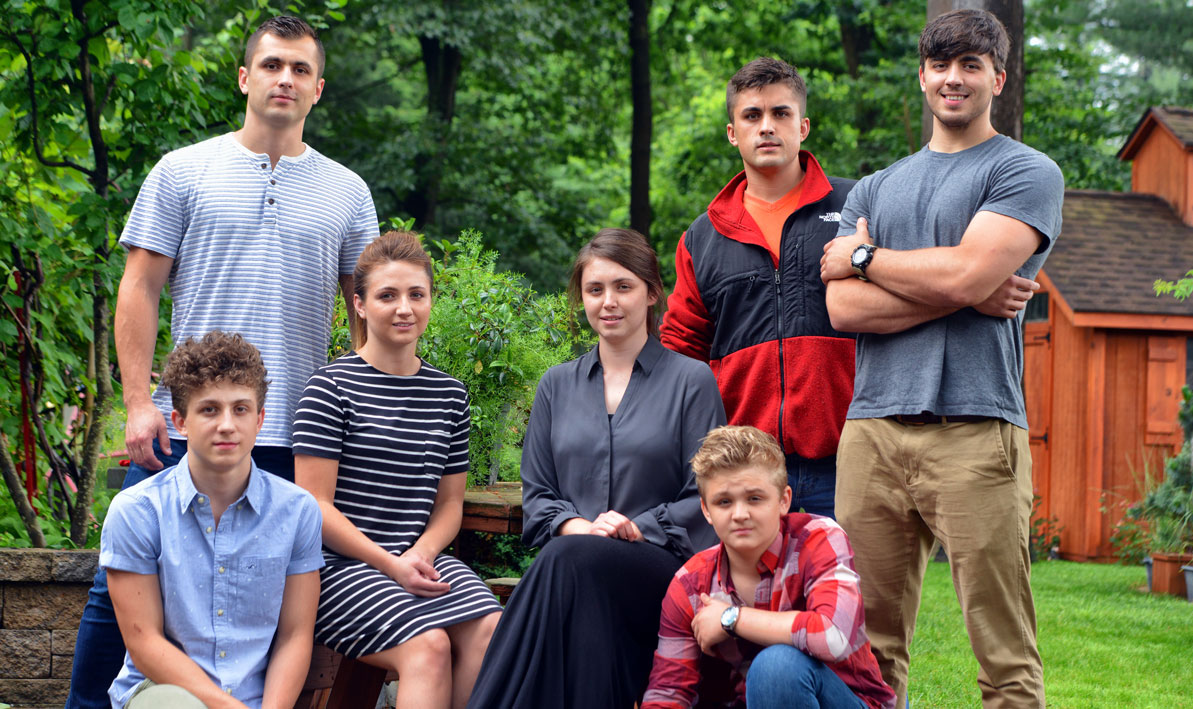 The Dubchak offspring of Westfield are a close-knit bunch. Ranging in age from 13 to 29, they are children of Ukrainian immigrants who came to the United States in 1992 when the two oldest were 3 and 4.

Today, all seven Dubchak children center their work and social lives around their family. All are accomplished musicians. They play music together in church. Their family band plays weddings. The three eldest boys run a family business.

And here's another thing they share: Five of the seven have studied at Holyoke Community College. Four have already graduated and the fifth is on track to earn his diploma next year. Everyone in the family expects that the two youngest, Jeremy, 16, and James, 13, will one day be HCC alumni as well.

The first Dubchak to enroll at HCC was Lisa, now 28. It made sense. The campus is less than four miles and just a 9-minute car ride from the family home. She graduated in 2010 with a degree in music education and then earned a bachelor's degree from Westfield State University and a master's degree in music composition from the University of Massachusetts Amherst.

Other Dubchaks followed suit at HCC.

"Maybe I just inspired them," said Lisa, with a quick smile and quiet laugh, after her older brother teased that he and his brothers felt outdone by her.

"Once I started and completed it, it just seemed like they could do it as well," she reasoned.

Katerina, 23, who goes by the nickname Katie, was next. She graduated from HCC in 2013 with degree in music and earned her bachelor's in biology from UMass in May.

Roman, 29, and Filipp, 2, meanwhile, were both working full time at a music repair business more than an hour away in Westborough. They started at HCC part time and accumulated credits over time.

Roman earned his associate degree in business administration in May; Filipp has five more classes ahead and aims to graduate in December of 2018.

David, 21, graduated alongside Roman in May and is now enrolled at UMass, where he is majoring in biochemistry and molecular biology.

Their mother, Rimma Dubchak, 52, says she fully expects her youngest two, Jeremy and James, to attend HCC when the time comes because the school has been such a good fit for the rest of her family.

While it's not uncommon to see a couple of siblings or even multiple generations from a single family attend HCC, the number of Dubchak alums is unusual. If all seven ultimately earn their HCC degrees, as their parents fervently hope they will, it would likely qualify as some kind of a school record, according to HCC staff.

Roman says HCC worked for him for many reasons.

"The teachers were cool. You could come up to them and they'd help you out," he said. "And it seemed like a good bang for the buck, not only money wise, but getting into other colleges." Right now he's concentrating on the family musical instrument repair business but he may eventually go on for his bachelor's degree, possibly at UMass.

"One of the best things at HCC is actually how you get to interact with the professors because the class size is so small," he said. "When you need help, which you usually do, your professor can devote time to you."

For Rimma, the prospect that all of her children could earn college degrees is thrilling. When she was living in the Ukraine and facing religious and political persecution, higher education did not seem possible for her family.

"I'm very excited and surprised I can send my kids to college," she said.

Sticking together
Even with college degrees in hand, the Dubchaks tend to stay around. Six of the Dubchak children still live in their comfortable home at the corner of Wieser Drive and Old County Road in Westfield.

Filipp got married in 2016. He and his wife, Ella, who also briefly attended HCC and plays in the family band, live in a house just across the street on Old County Road. When there's yard work to be done, everybody pitches in.

The Dubchak children's love of, and proficiency in, music was nurtured by their parents, who are also musicians. Rimma plays viola and their father, Victor, 58, plays guitar. To some degree, the parents guided their children to take up different instruments, so that one day they could form a functioning band.

"We all started at an early age and we just continued because music is important in our family," said Lisa, who plays piano and flute. "We always played in church, so that was important."

Roman puts it this way: "Our parents wanted to make sure we do something for God."

With their parents, the seven siblings form a nice-sized wedding band, and when the family joins the orchestra at their church, Southwick Baptist, they comprise about a third of its ensemble.

Most members of the family play more than one instrument. Roman plays saxophone, piano and oboe; Filipp plays clarinet; Katie is a violinist; David is a cellist and also plays double bass and electric bass; Jeremy plays oboe and piano, and James plays trumpet and piano. Everybody sings.

Last year, the family played four weddings, but the band, they say, is informal. They don't have a formal name. They mainly play for friends of friends who hear about them by word of mouth.

"We don't do it for the money. It's more like friends know that we play and they ask us to give music for their wedding," said Roman.

On a warm July day, several members of the Dubchak band gathered in their air-conditioned living room to play a couple of tunes. With Lisa on piano, Katie standing behind turning the pages of the score and playing violin, Roman on soprano sax and David on electric bass, the foursome made an impressive sound. The rich melodies of "Corazon de Nino" by Raul di Blasio filled the room as their beaming mother looked on. Clearly there was musical chemistry, the fruits of their childhood practicing evident.

Playing music wasn't always this rewarding for all of them though. As children, Roman said, some of them didn't appreciate the discipline required.

"It felt like a bummer," he said. "Our friends were riding bikes and playing soccer while we were practicing."

"For me, it didn't seem like a bummer," Lisa interjected.

"For the boys it did," Roman assured his sister. Even so, nowadays he recognizes the value of those efforts.

Their father has a slightly different perspective.

If music is a central focus of the Dubchak family life, it's also, for several members, a professional focus as well. Lisa is a music teacher and choral director for the Westfield public schools. The three older boys, Roman, Filipp and David, run their own instrument repair business, Dubchak Artist Services, LLC, for which they won a $1,500 Spirit Award from the Grinspoon Entrepreneurial Initiative in April.

They operate their business from the renovated basement of their home, where they service, repair and restore all manner of wind and brass instruments, including tubas, French horns, clarinets, trumpets, trombones, saxophones, and flutes. In addition to holding a contract with a large music store to service their school rental instruments, musicians come from far and wide to have them repair and restore instruments.

In an age when families tend to be going in many different directions, the Dubchaks' close relationship is rather remarkable. Lisa and Roman believe it is both religion and music that knits them together so strongly.

"A lot of families, they don't really stick together," said Lisa. "I guess we just like each other."

"Well it's probably just our family culture of being together," added Roman. "We constantly do things together."

He believes their shared passion for music is something that can't be underestimated.

"It keeps us together," he said.