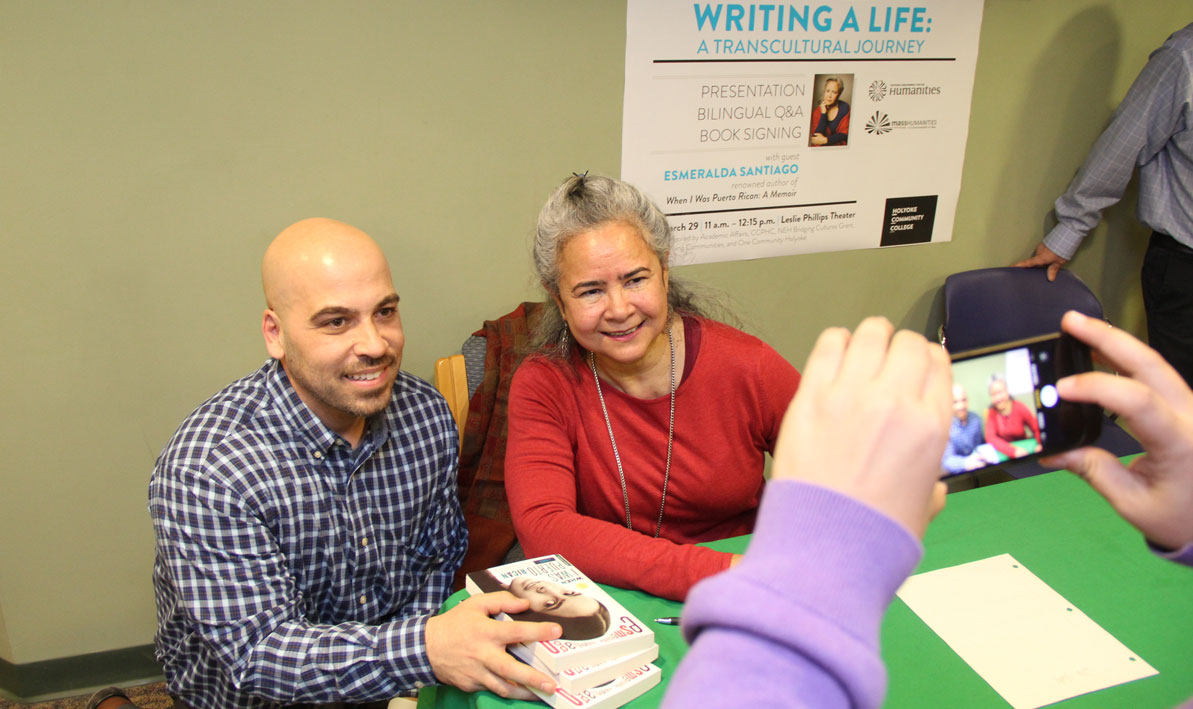 If there was any question about how much author Esmeralda Santiago means to people of Latino heritage, as well as others, one need only have glimpsed the crowd that turned out at Holyoke Community College last Thursday to put any doubt to rest.

Nearly every seat in HCC's Leslie Phillips Theater — capacity 318 — was filled. Extra chairs were brought in. Anyone who couldn't find an empty one stood along the sides or sat on steps in the aisles.

Many, like HCC student Cindy Soriano, came clutching copies of Santiago's 1994 memoir, "When I Was Puerto Rican," like Bibles to a church service and waited in a long line later to have them signed.

"I've read some of her books. This is my favorite, though," said Soriano, who lives in Northampton. She wore a purple and blue baseball cap that said "Puerto Rico" on it in bold, bright red letters.

"I'm skipping a class," she whispered. "Just to come here and see her and hear her speak  — it was so meaningful and inspiring to me."

Earlier, as Santiago took the stage, attendees rose to their feet, clapping and cheering. Santiago smiled.

"I'm so thrilled to see so many of you and to see such a diverse audience here," she said. "I have to admit that I don't always get this kind of audience, but you are my favorite."

The crowd returned her affection with more cheers and applause.

"I've always longed to be able to look out at an audience like this, where you can see all the humanity that I know exists in the world," she said. "I'm here, really, for you. I'm with you."

Santiago's visit was sponsored in part by a Bridging Cultures Grant from the National Endowment for the Humanities. Three years ago, HCC, in collaboration with the Center for Latin American and Latino Studies at the University of Massachusetts, received a three-year, $120,000 award to enhance HCC humanities courses with Latino Studies content. The grant also paid for cultural enrichment events like this one.

"Today's program is the culmination of this three-year project," said HCC Spanish professor and grant co-coordinator Monica Torregrosa, "a grand finale, so to speak, in which we are so grateful to host such as well-known and popular author."

"Esmeralda's memoirs and novels are a true inspiration to Latinos and non-Latinos alike," Torregrosa said in her introduction. "Not only is she an award-winning author, but she is also an advocate for public libraries and the arts. She is passionate about the need to encourage and support the artistic development of young people with storytelling and media literacy."

Santiago grew up in Puerto Rico in a one-room shack with a dirt floor and a tin roof, the eldest of 11 children. Her family moved to Brooklyn when she was 13. In her talk, titled "Writing a Life: A Transcultural Journey," Santiago described how she learned English from children's books in the Brooklyn public library, about attending New York's famous High School of Performing Art and Manhattan Community College before transferring to Harvard University. She talked about teachers and mentors and how meaningful they were to her as she adapted to life in the continental U.S.

"I was not very knowledgeable and I was kind of naïve and innocent, por que soy puertorriqueña decente," she said. "But these people kind of guided me through that and I still remember them."

Santiago emphasized the importance of reading "challenging books," especially if you want to be writer. "The thing that books allowed were to show me a world outside this very narrow universe that I was inhabiting," she said.

During a brief question and answer session, Maneylai Bena, 17, from the Margarita Muniz Academy, asked Santiago if there was anything in her life or books that she would change.

Santiago spoke for an hour and would likely have kept going but not for a schedule that included signing books in the theater lobby.

Irma Medina, '97, coordinator of HCC's Pathway program, brought her tattered copy of "When I Was Puerto Rican" and could not hold back tears when the author signed it. She purchased Santiago's memoir at the Odyssey Bookshop in South Hadley while nervously waiting for an interview appointment at Mount Holyoke College, where she had applied for transfer from HCC.

"I kept thinking, what the hell am I doing here? I don't belong here. I should leave," Medina remembers. As I walked into the bookstore there was this beautiful display, and there is was, When I Was Puerto Rican."

"I had never seen or read a book like this before. I saw myself. This was my story too and she gave voice to it. It meant I'm here. I matter. It was my sign. I did belong."