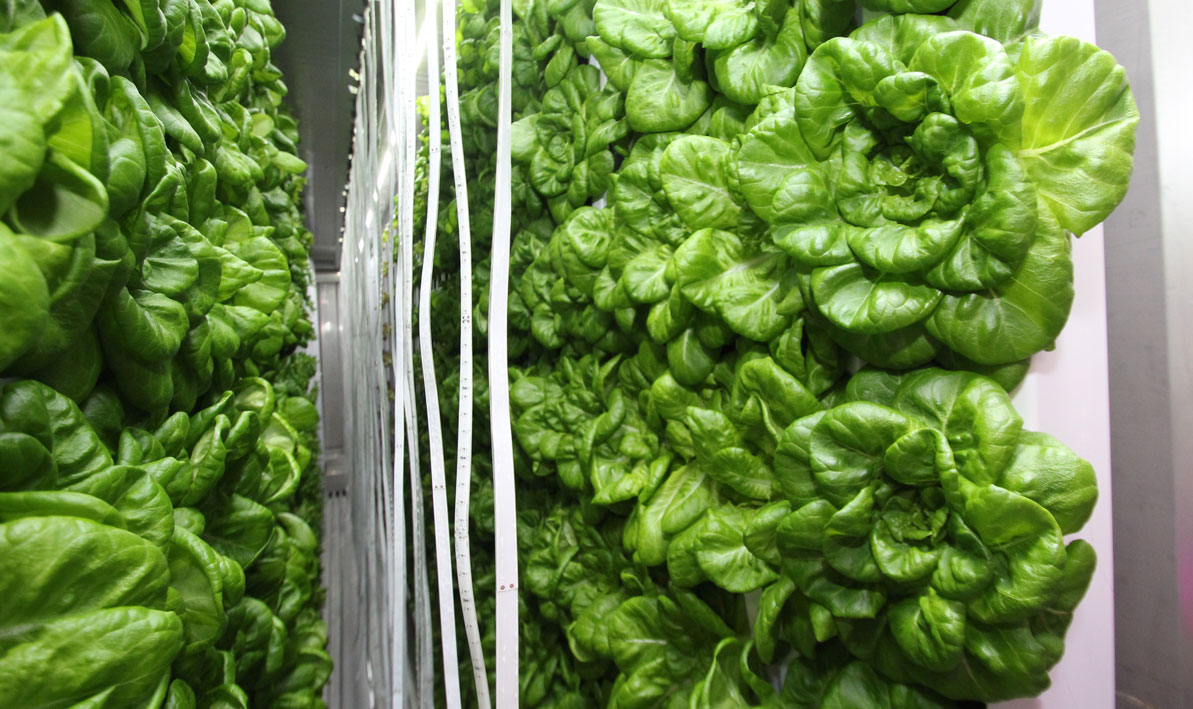 Editor's Note: This story appeared online Dec. 7 on Gazettenet and in print Dec. 8 on Page One of the Daily Hamsphire Gazette.

By GRETA JOCHEM
Courtesy of the Daily Hampshire Gazette

Two 40-foot shipping containers sit in an empty lot in the middle of downtown Holyoke on Race Street.

A passerby may not think twice about them, but inside one container an acre of lettuce is growing hydroponically, without the use of soil.

The inside of Holyoke Freight Farms looks more like a futuristic science lab rather than a farm. Sleek containers of romaine and butterhead greens hang vertically from the ceiling in neatly packed rows. The space is just big enough for a handful of people to stand inside with the plants.

The farmers have a lot of control: an electronic panel allows them to change the temperature and dispense nutrients, while lights can be turned on to give the plants a "daytime," said Claire McGale, an intern with Holyoke Freight Farms and a sustainability studies student at Holyoke Community College.

Inside the container she pointed out piping on the ceiling that helps deliver water to the plants. It takes about eight weeks to grow the plants from seeds, and the container farm can produce 500 lettuce plants weekly, McGale explained.

MassDevelopment's Transformative Development Initiative, which aims to spur economic growth in the state's Gateway Cities, provided funding for the project. Holyoke Community College is leading the project; other partners include the City of Holyoke and the grassroots urban agriculture organization Nuestras Raíces. The refurbished shipping container is from the Boston-based company Freight Farms, which sells growing systems it has nicknamed "Leafy Green Machines" all around the world.

Some produce is sold to Gateway City Arts just down the street, and they are currently working to get more customers, said Alina Davledzarova, farm manager and a HCC alumna.

Right now, she said, growing is happening in one of the two containers until demand picks up. Roughly 10 percent of the produce will be donated to the college's food pantry.

"It's the first time they've had fresh produce in the pantry," said Insiyah Bergeron, Holyoke Innovation District manager and a fellow at MassDevelopment. The project is also educational.

"This is meant to be a training project," Bergeron said, "to train interns from HCC and the community in the basics of hydroponic food production."

The plan, Bergeron said, is to soon bring in a few Holyoke residents in an apprenticeship program to work in the freight containers and learn skills for a job in hydroponic growing.

"It's also to get people to think about what farming could look like beyond the limited growing season," she added.

In Holyoke – a city without a lot of farmland – the growing containers are useful, McGale pointed out. Plus, she added, they are not affected by erratic weather and storms. For example, farm fields have been dumped with a heavy rain this year and this fall was one of the rainiest on record for several areas around New England.

Another advantage: Greens can be grown all year.

"How many people can say that they're farming an acre of lettuce in New England year-round and giving it to people down the street?" asked Davledzarova.

It is a lot of work though, Davledzarova and McGale agreed.

The inside of the freight container needs to be kept very clean to avoid issues like algae growth and plants need to be handled with gloves and protected by hairnets.

How do the hydroponically grown greens taste? Said McGale of the lettuce: "My daughter eats spinach now ... she's seven."