HCC explores its future as a Hispanic Serving Institution 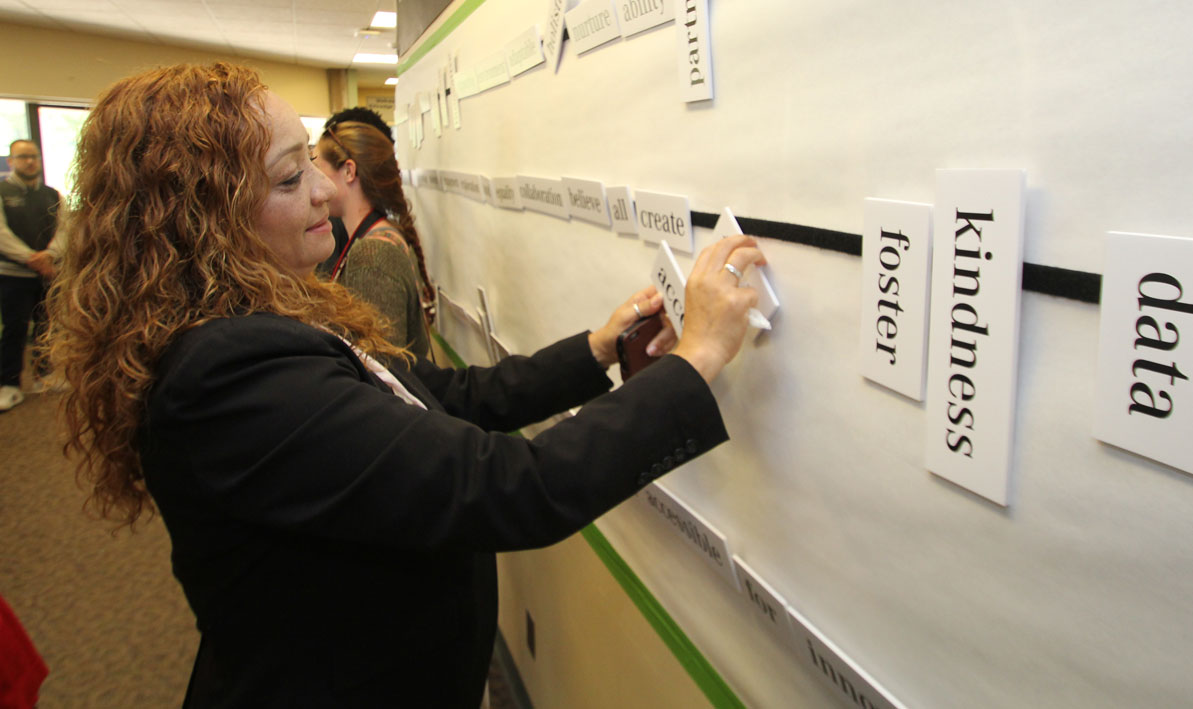 Editor's Note: This story was originally published in the May 24 edition of the Daily Hampshire Gazette and Gazettenet.com

By M.J. TIDWELL
Courtesy of the Daily Hampshire Gazette

At Holyoke Community College, 27 percent of students identify as Hispanic, many of them Puerto Rican.

Designated a Hispanic Serving Institution since 2016, the college took a moment Wednesday to reflect on the ways it serves its Latinx students and to reaffirm its commitment to providing strong education to all students, and especially those underserved, first generation, low-income Latinx students.

Latinx (pronounced "La-teen-ex") is a gender-neutral term used by some in place of Latino or Latina.

"Hispanic Serving Institution" is a federal designation for colleges and universities where more than 25 percent of the student population is Hispanic and can open up opportunities for designated schools to apply for specialized grants.

An afternoon panel discussion by professors at the college touched on a sampling of the initiatives that have helped improve the success of Latinx students over the last few years.

Spanish professor Raúl D. Gutiérrez showed a video illustrating the ways in which Latinx studies have been integrated into the college's curriculum with a Bridging Cultures Grant from the National Endowment for the Humanities. The college, in collaboration with the Center for Latin American and Latino Studies at the University of Massachusetts, received a three-year, $120,000 award to enhance courses with Latino studies content in 2015.

Gutiérrez also shared letters from students that spoke of the value of diversity in the classroom, not just in students but in learning materials.

"Why not read Latinx authors in English class and learn about Puerto Rico's debt crisis in economics class?" Gutiérrez said.

Spanish professor Mónica Torregrosa asked the crowd to consider two questions: Does the college's designation as a Hispanic Serving Institution mean it focuses only on the 27 percent of the school that is Latinx? What about the other 73 percent?

Among the elements of the program she touched on were trips to local high schools in Holyoke and Northampton to provide on-site placement testing, and English as a Second Language presentations to encourage high school students to attend college. She also said the program helped 74 percent of new students last fall complete their financial aid documentation.

"With each interaction with MAS, students trust one more person at HCC," Quiñones said. "The bridge just gets stronger."

Michele Snizek, director of retention and student success, said focusing on student outcomes positions the college for excellence, which in turn will guide the school to apply for grants for Hispanic Serving Institutions that can improve education for all students.

"We're framing the HSI designation through a student lens," Snizek said. "We want to focus on students first and then look at grant opportunities."

"Students first" is also the new mantra of Carlos Santiago, commissioner of the Massachusetts Department of Higher Education, who spoke about higher education at the state level.

Santiago has twice been named one of the 100 most influential Hispanics in the United States by Hispanic Business Magazine.

"College is not just tuition, fees and books," Santiago said. "Students need help navigating to and through college."

He said there are problems facing students that many administrators might not realize: hunger, homelessness, the need for child care, access to dependable transportation. Holyoke Community College, he said, is on the front lines of the future of education in providing guidance, assistance and resources to help students, particularly Latinx students, earn their degrees. He said he read a report due to be released soon that shows Massachusetts has a significant gap in Latinx students completing higher education.

"You're at the forefront of change," Santiago told the college. "You are a precursor of big changes coming to the rest of Massachusetts."

Shannon Sarkisian, a community outreach and admissions counselor, said after the panel discussion that between the acronyms and forms that need to be filled out and decisions about classes, degrees, and time commitments that need to be made, higher education can be daunting for anyone.

"I really think speaking about being a Hispanic Serving Institution is very important," Sarkisian said. "Not only does it help bring higher education to more and more Latinx community members, but the specific movement geared to meeting the needs of Latinx students helps everyone access higher education."

That's something Felicita Nieves knows well. She first went to community college in New York 16 years ago, but got "scared away" by the complicated school system and didn't finish her degree. Now, she's in her second year studying early childhood education at HCC and has an on-campus job providing guidance to new students as someone who has been in their place herself.

"I'm a non-traditional student and single mom trying to figure out how I'm going to do everything," Nieves said. "I wish this was the college I had started in because if it had been, I would have my associate's, bachelor's and master's degrees by now."

She said she helps new students through the entire college process, from course decisions to financial aid and getting around campus. Her mother, a Spanish speaker, is considering going to HCC to learn English to advance in her career field, she said.

"We want you to go to school. We're here to help you." Nieves said. "That's why I love HCC, because they do everything for the community. They look at all our needs. It's a family."

Earlier in the day a "Future Walk" celebration unveiled the school's new strategic plan, displaying its mission, vision, values statements and a timeline showing how the plan was developed on signs and visuals for viewers.

As Holyoke Community College looks towards the future, so do its students, with the 71st commencement ceremony on the way, June 2 at 10 a.m. at the MassMutual Center in Springfield.