'Put these fires out' 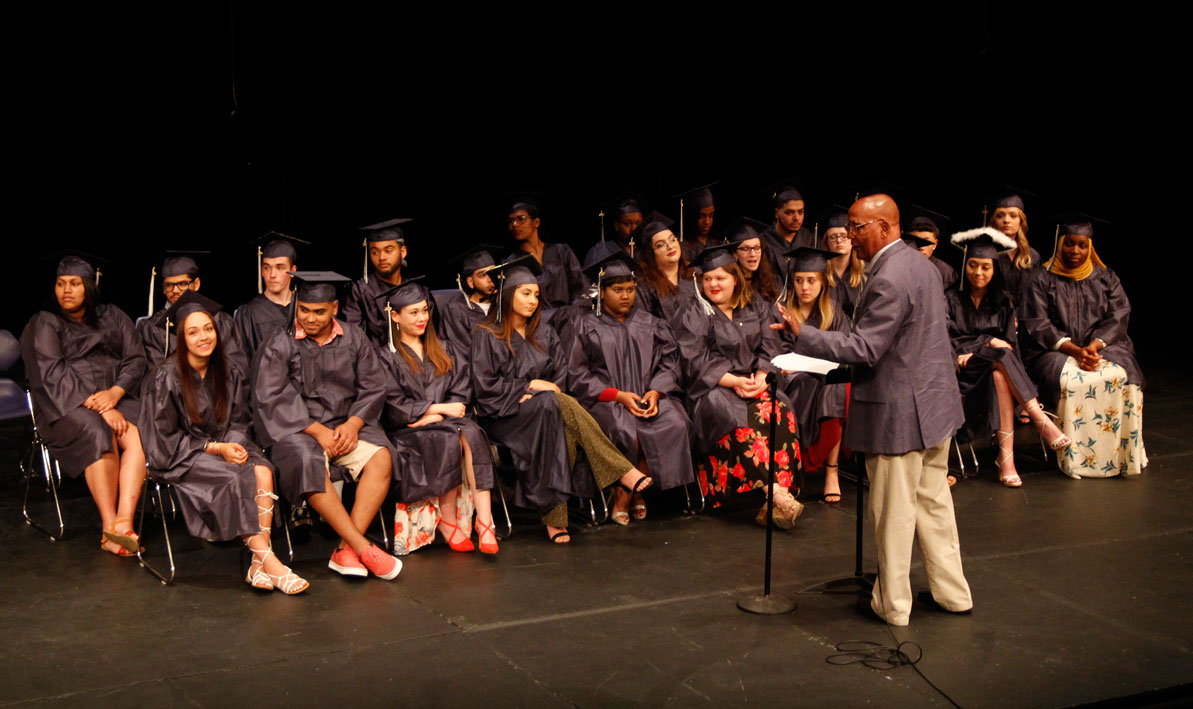 Unlike most graduation speakers, Gaylord Saulsberry ignored the lectern after being introduced and instead took a position at center stage. Like a conductor, he set down a black music stand and placed his pages on it, then looked out at the audience in the Leslie Phillips Theater and apologized for what he was about to do next – turn his back.

After all, he said, the three dozen soon-to-be graduates from Holyoke Community College's Gateway to College program were on stage too, in their black caps and gowns, seated, for the moment, behind him. As their teacher of history and education for the past two years, he needed to deliver his final lesson face to face.

"That's the way I'm used to talking to them," he said, and then he turned around.

"I have something to say to you and I have to say it with all sincerity," said Saulsberry, 72, a former high school principal from Amherst who is retiring this year from HCC after teaching here since 2003. "The nation we are living in is on fire. It's ablaze."

The flames consuming it, he said, were those of division, racism, concern over climate change, gender discrimination, Islamophobia, anti-Semitism, homophobia and selfishness, "possibly the worst combination of nasties that I have ever seen in this country."

"These flames, if left unchecked, will destroy the very promise that your graduation represents," he told them. "You, the class of 2019, must be able to put these fires out."

Graduating Gateway students are used to putting their own fires out. Gateway is an alternative high school program that offers dropouts and struggling teens a chance to earn their high school diplomas by taking college classes.

"Every person graduating today is on this stage for a reason," said student speaker Caitlyn Paul of Holyoke. "The reason we are here, the reason we are so proud to be here, is because traditional high school didn't work for us, but we still made it. We stand before you today wearing a cap and gown, symbols that we overcame the bad, powered through and prevailed."

The 36 students from Holyoke, Springfield, Westfield, West Springfield, Hampshire Regional, Palmer and Belchertown represent one of HCC Gateway's largest graduating classes since the program started in 2008.

Collectively they earned a total of 287 college credits and have a combined GPA of 3.1, "the highest we've ever had," said Gateway to College coordinator Vivian Ostrowski. Twenty of them will be continuing their educations as HCC students in the fall, 90 percent of them are "college ready," meaning they will not have to take any pre-college, developmental courses, and five of them have already completed their general education English requirements for their associate degrees.

"These are remarkable numbers," she said. "I bow my head to the students and to their remarkable instructors."

Those remarkable instructors include Gaylord Saulsberry, who is retiring from HCC after a 51-year career as an educator. In his speech, Saulsberry reminded the graduates about "what we have learned" in the classroom and in the Gateway program.

We have learned, he said, to plot our individual courses without fear when the course is right and just but not to be afraid to change course when change is needed.

"I ask you to think of your own experience," he said. "And John Brown."

We have learned, he said, that courage is the most important virtue we possess." Think of your decision to come to Gateway and think of Ida B. Wells."

"So I say to you firmly and I say to you directly, dammit, vote. Know the issues. Vote for someone, vote for something, not against someone or something. Because, as Alice Paul once said, ‘A vote is a fire escape from a burning building. Without it, no one hears you and without it, you will certainly perish.'"

We have learned, he said, to choose our lives on purpose and not by accident, to leave our useless baggage behind, that kindness begets kindness.