'Getting Out' on stage 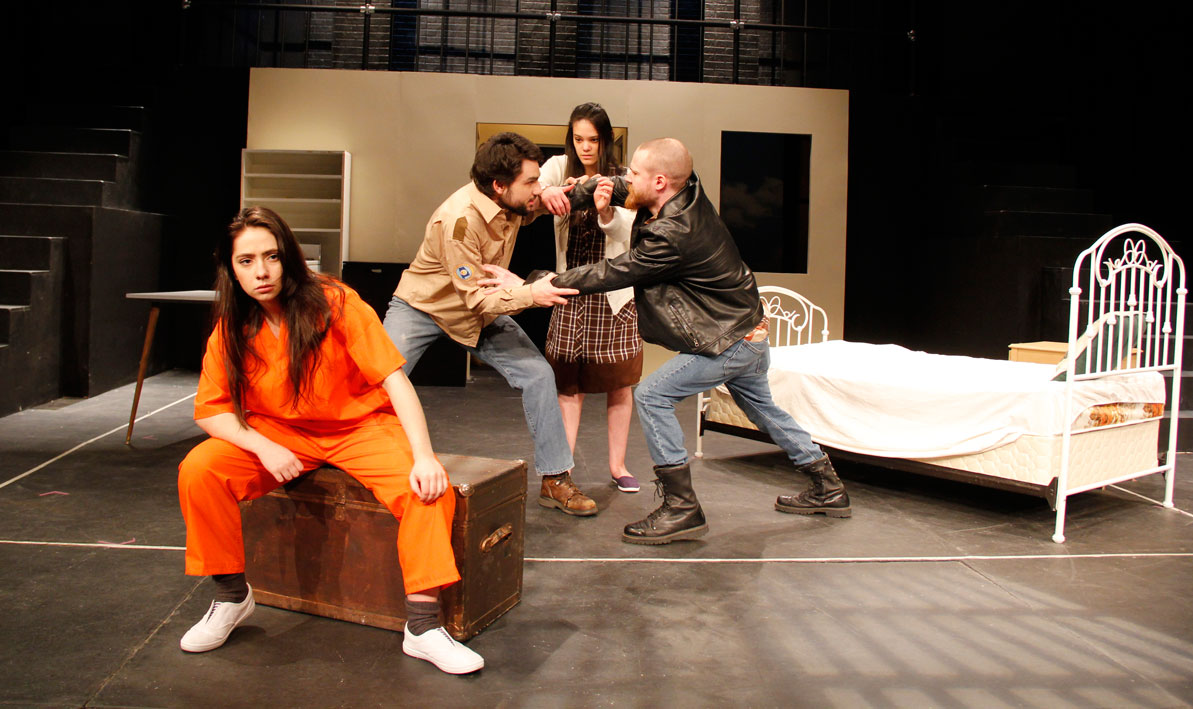 "Getting Out" begins as the title suggests, with a prisoner being released from jail.

After eight years of incarceration, the main character, Arlene, is escorted out by the warden. In the very first scene, she returns home and enters a new apartment.

How she copes is the story of the play, as Arlene reconciles her new life with the one she had before.

"It's a commentary on the criminal justice system," said director and Holyoke Community College theater professor Patricia Sandoval, '84, "but it's also a commentary on the will of a woman to find hope and survive in the world against incredible odds."

The Holyoke Community College Theater Department will present "Getting Out," by Marsha Norman, April 20-22, at 7:30 p.m. in the Leslie Phillips Theater, with a 2 p.m. matinee on April 22. The Thursday, April 20, performance will be ASL-interpreted.

HCC student Marissa Perez, of Florence, portrays Arlene, whose early struggles and experiences in prison are relayed in flashbacks. Her younger self, "Arlie," played by HCC student Carina Savoie, of Agawam, haunts the stage like an apparition.

As Arlene adjusts, we also learn the unfortunate circumstances that led to Arlie's imprisonment and meet the central figures of her life, including her abusive father, an ex-boyfriend, prison guards, the warden, and the kind chaplain who first called her "Arlene."

"Something will trigger a memory, and then she'll remember what happened to her," Sandoval said.

Norman wrote the play in 1977, but it is as relevant today as it was then, said Sandoval, particularly given the current attention to mass incarceration in the U.S. and controversies over the use of private prisons.

Recidivism rates for those like Arlene are discouraging, Sandoval notes, with something like 75 percent of formerly incarcerated individuals reoffending at some point.

"We might look at her and say, she's never going to break that cycle," Sandoval said, "but she has a child and she has reasons to make it on the outside."

Sandoval did not update any details to make "Getting Out" more modern. The play includes a reference to former late night talk show legend Johnny Carson and mentions paying a dime to make a call from the corner pay phone.

"I left them," she said. "I always have respect for the playwright. I don't feel entitled to make changes."

And even though the play is set in Kentucky, she did not ask the actors to speak with southern accents. "It's written that way, so it does come across," she said, "but I didn't want to make it that specific. It could be here. It could be anywhere U.S.A."

Sandoval chose "Getting Out" to fit in with this being the "Year of the Woman" in the HCC Theater Department. It started in September with a 24-hour-theater festival put on by HCC theater alumni as a tribute to Leslie Phillips, a beloved theater teacher who died in 1988. HCC alumna Denise Boutin, '77, directed "American Daughter" by Wendy Wasserstein for HCC's Fall production.

Sandoval wanted to direct "Getting Out," she said, because it was not just written by a woman but featured a woman as the central character.

The play's subject also synched with a focus on criminal justice under way on campus and in the larger community.

HCC has been partnering with public libraries in Hampshire and Hampden counties this spring to take a semester-long look at prison life in America. For their annual "community read," called "Hamptons + Holyoke Read," area libraries chose Orange is the New Black, the memoir that inspired the popular Netflix series "Orange is the New Black."

At HCC, students are studying the book in a Learning Community course called "Orange is the New Black: The Real Story," and HCC's Criminal Justice Department has sponsored a series of events this semester focusing on mass incarceration, including a screening last month of the documentary "13th," about racial inequities in U.S. prisons, and a panel discussion on criminal justice reform scheduled for April 12.

The Holyoke Community College Theater Department will present "Getting Out," by Marsha Norman, April 20-22, at 7:30 p.m. in the Leslie Phillips Theater, with a 2 p.m. matinee on April 22.

The Thursday, April 20, performance will be ASL-interpreted.

STORY and PHOTOS by CHRIS YURKO: (Top) HCC students Carina Savoie, left, Paul Matica, Marissa Perez, and Patrick Ryan, rehearse a scene from "Getting Out." (Thumbnail) Marissa Perez, of Florence, plays the main character Arlene, a woman just out of prison; Carina Savoie, of Agawam, plays Arlie, her younger self.