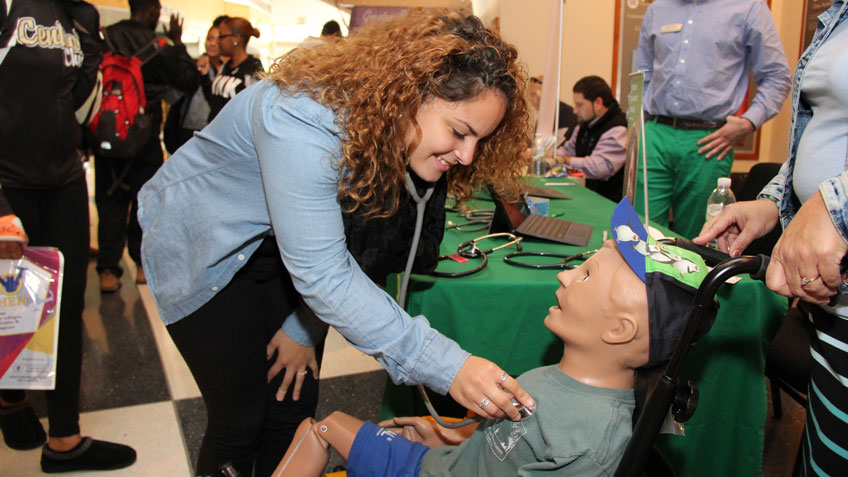 SPRINGFIELD — They oooed and ahhed over the baby in the car seat, leaned in to take a closer look, reached down to touch its skin, and gasped when it cried out.

"How do you make it stop?" said one of the girls, a senior from Springfield's Central High School.

In this case, all you'd have to do is touch a button on the computer screen.  The infant with the red pacifier was a "newborn" patient simulator from the high-fidelity medical Simulation Center at the Center for Health Education at Holyoke Community College.

Like other patient simulators used for health education at HCC, this baby blinks, breathes, "talks," and has a heartbeat. It can also be programmed to mimic the behavior of a real infant, complete with illnesses and other medical complications.

Earlier this week, the infant and its "brother," a five-year-old patient simulator in a wheelchair, visited the Basketball Hall of Fame as part of a "Go Higher" college fair organized by the Dept. of Higher Education to promote the state's public colleges and universities.

Over the course of the two-day fair, 1,800 high school seniors from Springfield also visited the Hall to view exhibits like HCC's, talk to Admissions counselors, and listen to students and alumni talk about their experiences in college.

It was the largest college fair ever put on by the state Dept. of Higher Education, organizers said. Gov. Charlie Baker attended the first day of the fair on Tuesday.

Among the student and alumni speakers were two from HCC: Selina Ortega, '16, a 21-year-old criminal justice major from Holyoke, who now works at HCC as a campus police officer and is also working on her bachelor's degree in psychology at Bay Path University; and current HCC student Frances Rivera-Diaz, 31, who briefly attended Springfield's Commerce High School before dropping out in 9th grade.

"Unfortunately, I didn't make the right choices," Rivera-Diaz said. "I was working and I was like, I have a job already, what do I need school for?"

She talked about the succession of low-paying jobs she had over the years, in manufacturing, landscaping, fast food, dog walking. "I was working every day, six days a week, about 40-50 hours and I wasn't getting anywhere. It was tiring."

Her life changed, she said, after she got her GED through HCC. She moved on to HCC's Transition to College and Careers program, then to HCC's STEM Starter Academy, through which she earned a National Science Foundation STEM Scholarship.

She is now an engineering major at HCC. Her dream is to work for NASA.