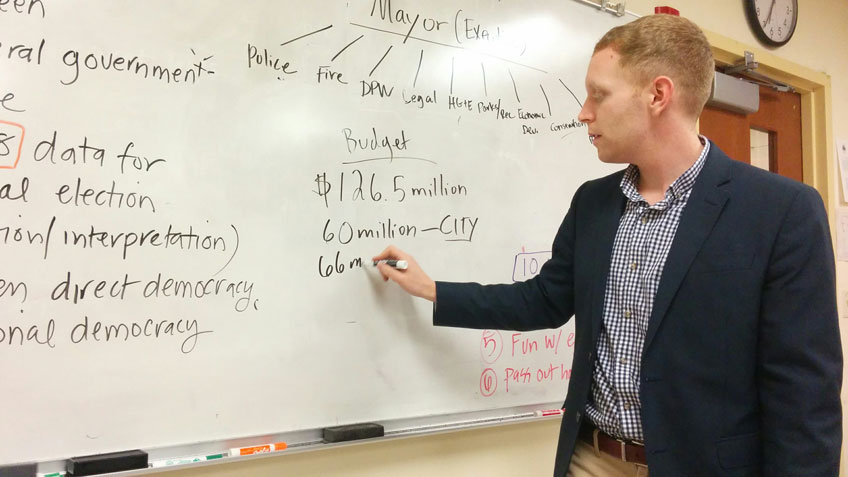 Earlier this week, state Rep. Aaron Vega was talking about state government, how it operates, how bills get passed, how voter initiatives, such as the four questions Massachusetts will consider Nov. 8 on Election Day, end up on the ballot.

Vega took questions on topics such as drivers' licenses for immigrants and the status of the Holyoke public schools. He also discussed the pros and cons of ballot Question 4, which, if passed, would legalize marijuana in the state.

A couple of weeks before, Holyoke mayor Alex Morse had stood in the same spot, at the front of a classroom in HCC's Adult Learning Center at the Picknelly Adult and Family Education Center in downtown Holyoke.  The mayor talked about government as well. He gave a crash course on the city's budget and explained the differences in governance at the local, state and national levels.

Vega and Morse were both there for a night as guest lecturers. The students they spoke to are enrolled in an Adult Basic Education Level 2 Social Studies and Science class and preparing to take their high school equivalency test, the HiSet. The class meets in the evening three nights a week for three hours each night. The first half is social studies, the second half science.

"We've been talking a lot about the election," said Aliza Ansell, coordinator of the ALC program and the class instructor, "so, in social studies, I've been focusing on government and using the election as a platform to teach it."

"The speakers have been supporting the material students have been reading," she said.

Other guests this semester have included Linda Hueber, western Mass field organizer for Citizens for Farm Animal Protection, who talked about ballot Question 3 (The Massachusetts Minimum Size Requirements for Farm Animal Containment); and Sophia Buchanan, a government major from Smith College, and an activist with Black Lives Matter.

Vega, a democrat who represents Holyoke and is an HCC alum, Class of 1990, encouraged students to get in touch with their local legislators when they have problems they want to see addressed.

"State and local issues are the issues that affect your daily life," said Vega. "The thing that helps moves things along is people like yourselves. The squeaky wheel gets attention. If more people email us or write us or call us, whatever your issues are, that's what gets things done."

Buchanan, who also visited the class this week, talked about the Black Lives Matter movement, the value of education, and charter schools. She attended Fort Rivers Charter Public School in Greenfield. She is opposed to Question 2, which would expand the number of charter schools in the state, but presented arguments on both sides of the issue.

Anzell said she asked all the guest speakers to present opposing viewpoints on election issues to help students prepare for the English Language Arts section of the HiSet exam.

"For the ELA section of the HiSet, students have to write a pro-con essay, so hearing both sides of the issue will help them think about the ballot questions in a pro-con way," Ansell said.

Buchanan urged the students to stay informed on all the issues.

The main takeaway, said student Christina Alvarez, a 29-year-old mother of three from Holyoke, "We learned that our voice counts."

"The really cool thing," said Ansell, is how excited and interested the students have become about government and next week's election. They asked Rep. Vega if he could help them raise money for a trip to Washington, D.C. Probably not Washington, he said, but maybe Boston.

"The fact that they have gotten so turned on to government really speaks volumes about what the speakers have done to engage them," she said.

PHOTOS: Mayor Alex Morse visited HCC's Adult Learning Center Oct. 11 to give a lesson about government. He gave a crash course on the city's budget.