A $5.2 million Energy Conservation Project will save the college nearly $200,000 in utility costs annually and reduce carbon emissions by an estimated 672 tons per year. 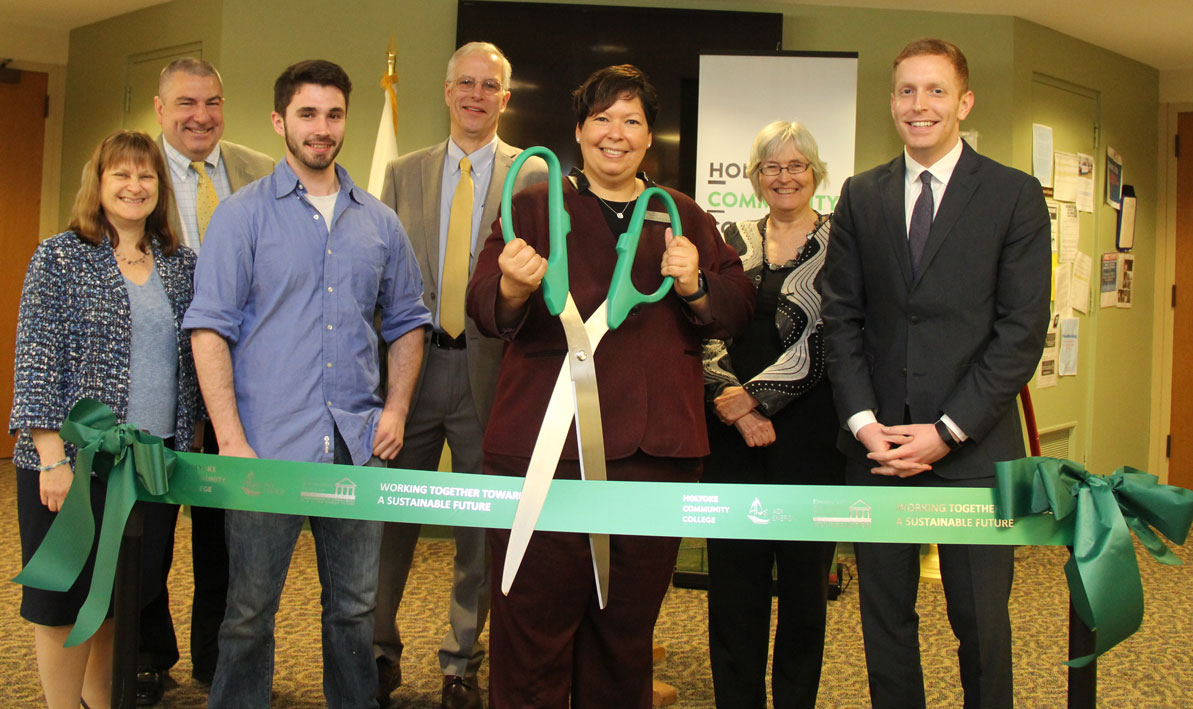 Holyoke Community College is a little bit greener now, and that's not just because it's spring and the sun is finally out.

HCC recently completed energy upgrades to campus facilities that will significantly reduce its consumption of electricity and natural gas, saving the college nearly $200,000 annually in utility costs and reducing carbon emissions by 672 tons per year.

Yesterday, the college celebrated the completion of its $5.2 million Energy Conservation Project with a ceremonial ribbon cutting in HCC's Fine & Performing Arts Building.

The ribbon, symbolically green, contained the phrase, "Working Together Towards a Sustainable Future."

"As a member of the Presidents' Climate Leadership Network, HCC is serious about its commitment to sustainability, to reducing its environmental impact, and to using resources thoughtfully and responsibly," said HCC President Christina Royal. "As an institution of higher education, we also play a special role in equipping citizens with the knowledge needed to solve the problems our planet faces as the result of human activity."

The energy project was conducted as part of the state's selection of HCC as a "Toward Zero Net Energy" pilot site under its Accelerated Energy Program, which was designed to reduce energy consumption while creating clean energy jobs and reducing utility costs in public facilities.

"The college has always been very supportive of all new opportunities for us to help the campus be more efficient and make the world a better place," said Hope Davis, deputy commissioner of the state's Division of Capital Asset Management and Maintenance, or DCAMM, which oversees all state college construction projects. "One of the highlights of this project for us was the work we did with engagement of the college community. It's really been a wonderful partnership."

Work on the energy project began last spring and was completed by the beginning of the spring 2017 semester. According to Peter Blauvelt, senior project manager for ADI Energy, the project's energy contractor, the majority of the energy savings is being derived from new LED lights and upgrades to the computer energy management system and HVAC systems in the buildings throughout campus.

"It was a pleasure working with DCAMM and Holyoke Community College on this infrastructure project that reinvests in the learning environment, saves energy and provides a sustainable future," Blauvelt said. "This project was a great example of how energy technology has come a long way and is making sustainability not only a cost effective investment but the right thing to do."

Sustainability Studies professor Kate Maiolatesi said the college's selection as a Toward Zero Net Energy pilot site has been a wonderful and exciting opportunity for HCC students, who were included in the project planning and design meetings on campus and in Boston. Some also received internships with the college's energy consultant.

"They got to use the campus as a kind of living lab," she said. "During those early planning meetings, there were a lot of cool ideas discussed and thought about. A lot of the more visible ones" - such as wind turbines and rain harvesting - "actually got put on the side because the ones that are more invisible make a lot more sense. They have a lot larger costs savings and a lot larger reduction in our carbon output."

Even though he was new to HCC this year and not part of those planning meetings, James Westcott, a Sustainability Studies major from West Springfield, said he appreciates the investment HCC and the state have made to make the campus "greener."

"I came to Sustainability Studies to make a difference, as cliché as that sounds," Westcott told the crowd at Wednesday's event. "As students, it's really nice to see the projects that we work on being implemented, so to be part of a campus that really cares about my program and what I believe in really makes all the difference in what I'm learning and what we're doing here."