Guided by the light

Freshman keynote speaker at College for a Day 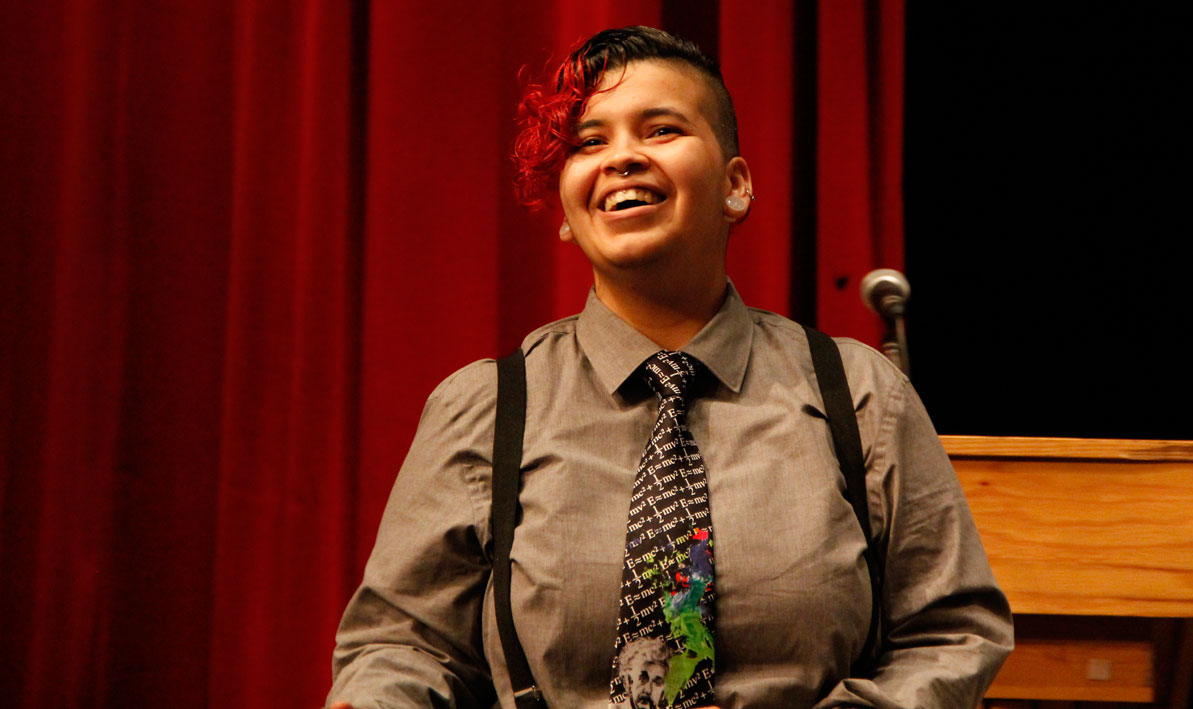 She was a student at HCC's Adult Learning Center, taking a science class as part of a GED test preparation program. Her assignment: Build a flashlight out of basic household items -- paper clips, cardboard toilet paper roll, battery, bulb.

Until then, she'd worked for many years at Burger King. Her goal was to leverage her GED into a managerial job at a gift shop in the Holyoke Mall.

"Once that little light bulb turned on, this one turned on," she recently recalled, pointing to her head. "I realized, why am I just settling for a retail job?"

"I don't want a job," she continued. "I want a career. I want to work somewhere where I'm going to love it, I'm good at it, and I want to go there every day. That's what I want."

After a long road, Rivera-Diaz is now completing her first year at HCC. She is an engineering major and the recipient of a multi-year National Science Foundation STEM Scholarship. On Tuesday, she was the keynote speaker at College for a Day, an annual event that brings hundreds of Adult Basic Education students from all over western Massachusetts to sample college classes at HCC.

"I didn't believe I could do this," she said. "I really thought college was for smarter, younger and, honestly, upper class people. I didn't think, as a female Puerto Rican who still struggled with English, that college was for me."

"So," she said, "if any of you are struggling with that right now. I understand you. And just like I'm standing here, some day you guys can stand here too."

After she earned her GED, Rivera-Diaz continued her education through HCC's Transition to College and Careers program, and she encouraged the more than 200 students in the audience to do the same. She said the TCC program helped prepare her for college level work, especially in writing and math. It also helps teach students how to apply for financial aid and how to find and apply for scholarships.

The TCC program also led her to HCC's free summer STEM Academy, which focuses on science and math. "We learned about volcanoes, planet formations, ecosystems," she said. "We weren't stuck in a classroom."

For one of their academy project, students walked around campus, collecting soil, vegetation, rocks, creek water and crawlers to create mini-ecosystems -- "a small forest in a jar," she said. They put the jars under spotlights and observed.

"Some of the jars were doing crazy stuff," she said. "My jar started growing maggots. I thought it was pretty gross, but it was exciting. It just made me want to learn more."

Through the STEM Academy, she heard about the NSF STEM Scholarship. She applied, and got it. "It was a big accomplishment," she said, to whoops and applause from the audience. "I'm just this bilingual, minimum wage, lower class female, and I was able to earn this national science scholarship."

"Science is mainly a world of men," she said, "and I'm challenging myself as a woman to go into a man's career and prove that a woman can do an equal amount of work that a man can do."

Some day, she said, she wants to work for NASA.

"Forget flipping burgers," she said. "Why do that when there is something better out there for yourself? There's something you're good at, something that's going to light up."

"When I did that flashlight, I remembered that I actually like putting things together," she said. "When the teacher was teaching us flashlights, he was telling us, this is how an engineer thinks. These are the steps they take. That's what I enjoyed and I liked, and that's what I do."

PHOTOS and Story by CHRIS YURKO: Frances Rivera-Diaz talks to ABE students at College for a Day.