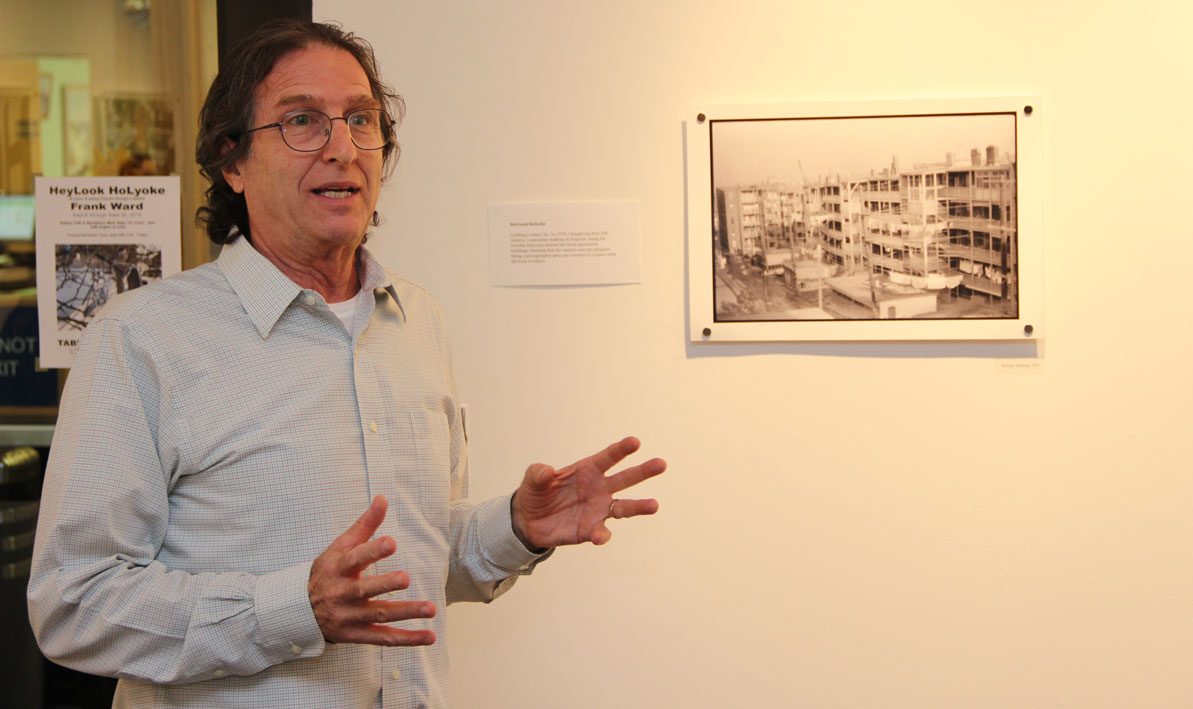 In fact, Ward snapped the grainy black and white photo in Holyoke in 1970. He was then an undergraduate student at the University of Massachusetts and had recently bought his first camera - a 35-millimeter - and was only then learning how to use it.

"It's not from my very first roll of film," he recently recalled, "but it's probably in the first half dozen or so."

During his long career as both a teacher and photographer, Ward, a professor of visual art at HCC, has traveled all over the world taking pictures. He's been to India, Tibet, Bosnia, Kosovo, Uzbekistan, Tajikistan and Russia, among other places, and has won numerous awards and grants for his work. But the subject he has returned to more than any other during the past five decades — and the focus of his exhibit — is Holyoke.

"Holyoke is a treasure," said Ward, who lives in Ashfield. "From my perspective, having Holyoke as an asset that's here for students is one of the reasons that I like being here."

Ward's show, which continues through September, is called "HeyLook HoLyoke" — "HeyLook" being a playful anagram for "Holyoke."

The images span Ward's 46 years' photographing the city, beginning with the black and white tenement photo and ending with a series of color images Ward took this summer during the city's Puerto Rican Family Festival.

In between, there are photos of a police officer standing outside the police station, two of Holyoke resident Diosdado Lopez, one as a young activist and more recently as a city councilor, a mural in the city council chambers, an art professor's messy office, a drained canal, an empty jail cell, a shoe tree, a partly demolished building, an old fire alarm box, storefronts, and lots of portraits, many of them life-sized.

"My favorite things to photograph are flesh and metal — not necessarily in the same picture," Ward explained during a gallery talk. "There's something about a camera that really captures the texture of skin and paint, peeling paint especially. If you look at the history of photography, you're going to see a lot of peeling paint pictures. And a lot of nudes."

There aren't any nudes in "HeyLook HoLyoke," but there are plenty of pictures of  flesh, metal and peeling paint. Many of them were taken on class field trips with his students.

"Holyoke is a really good place to be, and it's amazing how many HCC students haven't really wandered around in Holyoke," he said.

In choosing pictures for the exhibit, he said he was impressed by this own guts as a 20-year-old college student in 1970, wandering around a strange neighborhood in Holyoke, climbing up on people's backyard balconies and taking pictures.

"I do have more pictures of kids playing on these levels I was crawling around in, and I was thinking, would I do that today and just bother people and show up like that?" Ward said. "But there's something about having a camera that's like, permission to be a real jerk, cause you can stick your camera in almost anybody's face and sometimes they'll complain. But what I tell my students is, say, oh, my professor made me do it. He said I had to take a picture of a stranger. I'm so sorry."

"But," he added, "do that after you click the shutter."

Ward's "HeyLook HoLyoke" exhibit is on display in HCC's Taber Art Gallery, which is accessible through the HCC Library. There are additional photographs from Ward's collection hanging in the hallways of the Media Arts Center, on the third floor of the Campus Center.