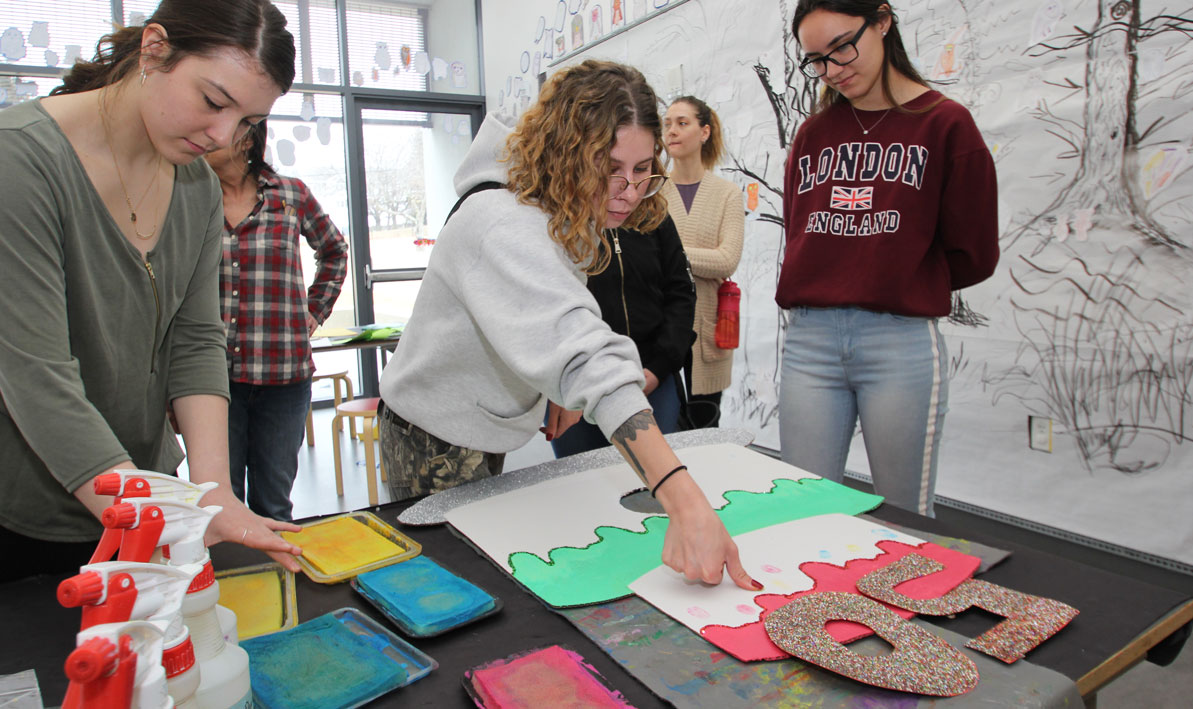 Anyone with even a cursory appreciation for children's literature knows the story of The Very Hungry Caterpillar, the green, red-faced worm who eats through the pages of his own picture book to become – spoiler alert – a beautiful butterfly.

The Very Hungry Caterpillar is regarded as one of the most successful children's books of all time – award-winning, best-selling and beloved. First published in 1969, the book launched author and illustrator Eric Carle to global renown.

This spring, as part of a Service Learning project, early education students at Holyoke Community College helped celebrate the 50th anniversary of Carle's most-famous charaacter at the museum he and his wife co-founded, the Eric Carle Museum of Picture Book Art.

"I'm excited because the students have brought so much creativity and energy to this event," said Meg Nicoll, an art educator at the south Amherst museum. "It's been a really holistic process, and I think it's going to be a fantastic day."

Students enrolled in HCC professor Sheila Gould's Curriculum in Early Childhood Education course were tasked with designing and facilitating an art activity for guests visiting the museum's Art Studio for the 50th anniversary celebration on March 24.

"One of the objectives of this course is to learn how to create lesson plans that are adaptable to children with a wide range of abilities," Gould said. "It was a natural fit to work with the museum because the students were able to practice lesson plan writing and design engaging activities in a way that would impact the community. Essentially, it's taking what we would have done in the classroom for pretend and doing it here, in real life."

Earlier in the semester, Gould broke the class into four teams, each responsible for coming up with an idea for an interactive project based on the book. They spent weeks on research, gathered during tours of the museum and Art Studio and conversations with Nicoll at the museum and in the classroom at HCC.

"The students have come here several times to learn about our philosophy and approach and learn about the Art Studio and how we set up projects for guests," said Nicoll.

Coached by HCC business professors Ellen Majka and Alison Sawyer, each team developed a lesson plan and pitch for their idea that they delivered before a panel of judges made up of museum and HCC staff.

In the end, judges deemed best an idea to collaborate with museum guests to create a giant caterpillar on the Art Studio windows, and the teams then worked together to plan it out. In their classroom at HCC, the students created a four-foot-tall Very Hungry Caterpillar head that would serve as the starting point.

On Very Hungry Caterpillar Day, the students enlisted children and other visitors to help construct the body of the caterpillar from materials they prepared in the Art Studio a few days before. The students also made a large cardboard birthday cake and invited guests to "sign" it with their thumbprints.

"For big events, we could have several hundred people coming through the Art Studio throughout the day," said Nicoll, "so having the extra help is great and having the students here to help prepare the materials is huge cause we can go through a lot of art materials on a day like this."

On the Thursday before the 50th anniversary event, HCC students spent the morning cutting paper and taking care of other last-minute details. HCC student Dylan Burns saturated stamp pads and securing them in plastic bags.

"This has been an amazing opportunity, said Burns of Suffield, Conn., "especially to be doing it for the 50th anniversary of the Very Hungry Caterpillar, and to be able to do something that is community based really means a lot."

PHOTOS by CHRIS YURKO: Early education students from HCC get ready to celebrate the 50th anniversary of the Very Hungry Caterpillar at the Eric Carle Museum of Picture Book Art in Amherst. (Above) HCC students put their thumbprints on a birthday cake card they made for Eric Carle Museum's 50th anniversary celebration for the Very Hungry Caterpillar.