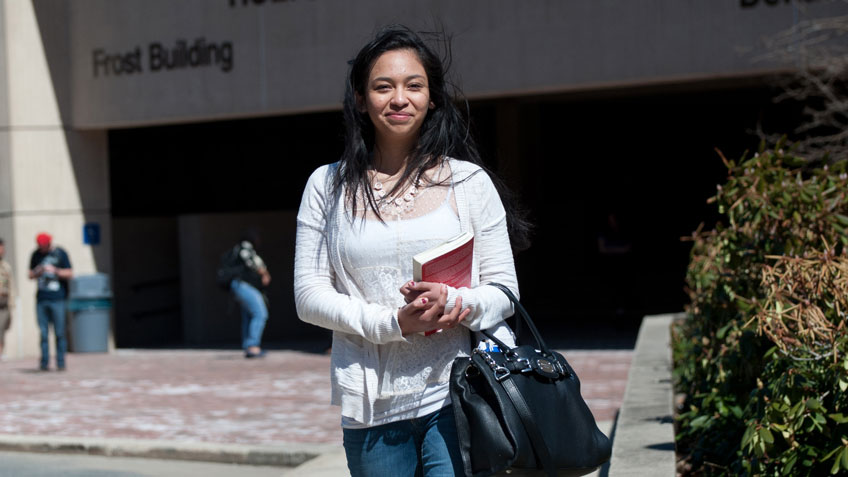 She has told her story many times now. In the newspaper. On the radio. At public events. To teachers and classmates.

It's a story about fleeing gang violence in El Salvador with her mother and brother at the age of 10. About being smuggled through the Mexican desert on their way to the U.S. About struggling to learn English in American schools and yearning to go to college.

For a long time, though, Angelica Merino Monge had been afraid to tell her story, afraid of the backlash and scrutiny she might face over her immigration status.  At HCC, she learned to be an advocate for herself and others like her, undocumented immigrants who came to the United States as children, seeking to better their lives through education.

"My teachers really taught me how to be open about who I am, where I come from, my struggles," she said.

Merino Monge's story is one of 28 featured in a new book from the University of Massachusetts Press called Words in Transit: Stories of Immigrants. Another story in the collection is that of HCC alumnus Bryan Torres, '14, who also left El Salvador for the U.S. as a child. Torres is now a student at Amherst College.  Both will tell their stories again Wednesday night when they take part in a panel discussion at an HCC event celebrating immigration and education.

The event, Wed., Oct. 26, at 6:30 p.m. in the Leslie Phillips Theater, marks both the release of Words in Transit and the creation of a new scholarship at HCC for student-immigrants funded in part by proceeds from the sale of the book.

The first-person accounts collected in the book were originally broadcast on New England Public Radio for an oral history project called "Words in Transit."

Amy Dopp, interim HCC vice president of Institutional Development, will introduce the scholarship, which was largely inspired by the stories of Merino Monge and Torres.

Merino Monge, a graduate of Amherst-Pelham Regional High School, and Torres (Northampton High School) came to the attention of NEPR after telling their stories to the Daily Hampshire Gazette for an article about the Deferred Action for Childhood Arrivals Act, which granted temporary residency to certain undocumented immigrants who came to the U.S. as children. The two were again featured in news stories for their role in organizing the 2015 Out of the Shadows march in Amherst, which was meant to bring attention to the plight of undocumented immigrants and DACA students.  They were then recorded for the NEPR project.

"I had never told my story, my full length story, to anyone, especially on the radio," said Merino Monge, who now lives in Northampton, "so that was a new experience for me. The reason I did it, I guess, was to raise awareness about undocumented people, but more specifically about undocumented students."

At HCC, Merino Monge is president of the LISA Club (Latino International Students Association). She has earned several scholarships from the HCC Foundation and last spring won the award for Outstanding Student in Political Science.

Outside of school, she tutors migrant workers enrolled in the "Planting Literacy" program at Head Start in Springfield. She is an intern at the Holyoke Public Library, where she translates documents and forms for a Puerto Rican history project.  She also works 35-40 hours a week as a personal care assistant and dietary aide at Center for Extended Care in Hadley. Because of her immigration status, she does not qualify for financial aid. She also must pay between $200 and $1,000 every two years to maintain her DACA status.

"I think education is as important to me as it is for anyone, to get ahead, to be someone in life, to do what you want to do," said Merino Monge. "For me, it's especially important because I've had to fight for it. I know the value of what I'm paying for. I think it motivates me even more to get good grades and make the experience at HCC as rewarding as I can."

She said the feedback she's received from the original "Words in Transit" radio broadcast has been mostly positive.

"There were a few people who were not understanding," she said. "Obviously, immigration is a really hot topic. I've gotten some negative reactions, but also some really good stuff. So I feel like the good stuff far outweighs the negative."

Initially, she said, she was ambivalent about her story being published in a book, but has since warmed to the idea. She has already made one public appearance at a bookstore in Easthampton to help promote the book.

"I wasn't really sure how I felt about the book at first because I knew that it was going to be extremely public," she said, "but now that they're doing the scholarship for immigrant students, I'm very proud."