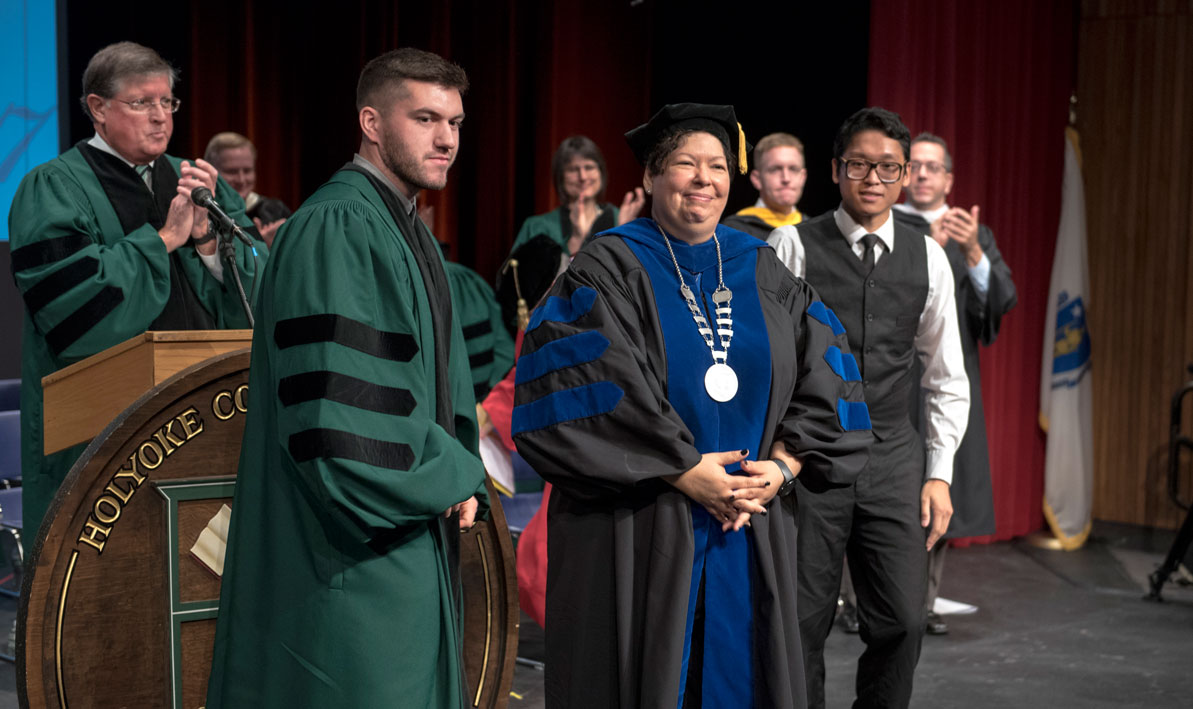 In her inauguration address, Holyoke Community College president Christina Royal affirmed her commitment to the community college concept - that everyone deserves the opportunity for an affordable and high quality college education.

"We accept students under any circumstances and meet them where they are, determine what they need, empower them to see their own potential, guide them on their educational journey, and stand proudly with them at graduation," she said from the podium in HCC's Leslie Phillips Theater. "And, student by student, this is how you build an educated society."

Royal spoke Friday soon after HCC student trustee Jonathan Jasmin of Westfield placed the presidential medallion around her neck, marking her official installation as the fourth president of the college and the first woman to hold that position.

Her address capped the inauguration ceremony, which was attended by some 200 members of the campus community, dignitaries, and guests, including Royal's family.   In her speech, she traced her educational journey from a first-generation college student who grew up in a low-income, bi-racial family to the top spot at HCC, a job she began in January.

"HCC's mission and commitment to access, equity, success and affordability is deeply personal to me ... ," she said. "No one in my immediate family graduated from college. No one. I literally had no concept of college and no one to give me perspective on it."

"But I did know this," she added. "If I wanted to create a future that was less burdensome than the one my parents had, I needed to do something differently."

What she did was decide that college was her gateway to a more prosperous life, even though her family could not afford the cost.

"Tuition and fees were paid by Pell and other grants, a presidential scholarship, work-study opportunities and student loans," she said. "When my family dropped me off at college, we were thinking that I was set for the first year, only to find out that I needed another $400 for books for my first semester. We just didn't have it."

Click here to read the full text of her inauguration speech ...

The procession into the theater that opened the inauguration ceremony included the presidents of the other Massachusetts community colleges, as well as the leaders from some of HCC's top transfer partners: Smith College, Mount Holyoke College, Elms College and Westfield State University.

McKnight-Tutein said she recognized early on that Royal was "born for greatness," even though the future HCC president was initially underestimated by others.

"They were all wrong," she said. "What they underestimated most was her grit ... It's no coincidence that the Holyoke community has chosen the best and the brightest to lead the best and brightest. Holyoke Community College will be even greater for having made the decision to hire you as their president."

Royal noted that while community colleges play an indispensable role in public high higher education, there are significant challenges they must continue to address,  such as food insecurity and homelessness, mental health issues, transportation and affordability.

"But the greatest threat to the mission of open access education is losing our societal perspective of education as a public good," she said. "While I think the next decade will bring about a lot of change, some disruptive, to community colleges and higher education in general, I also believe the best years are ahead of us."