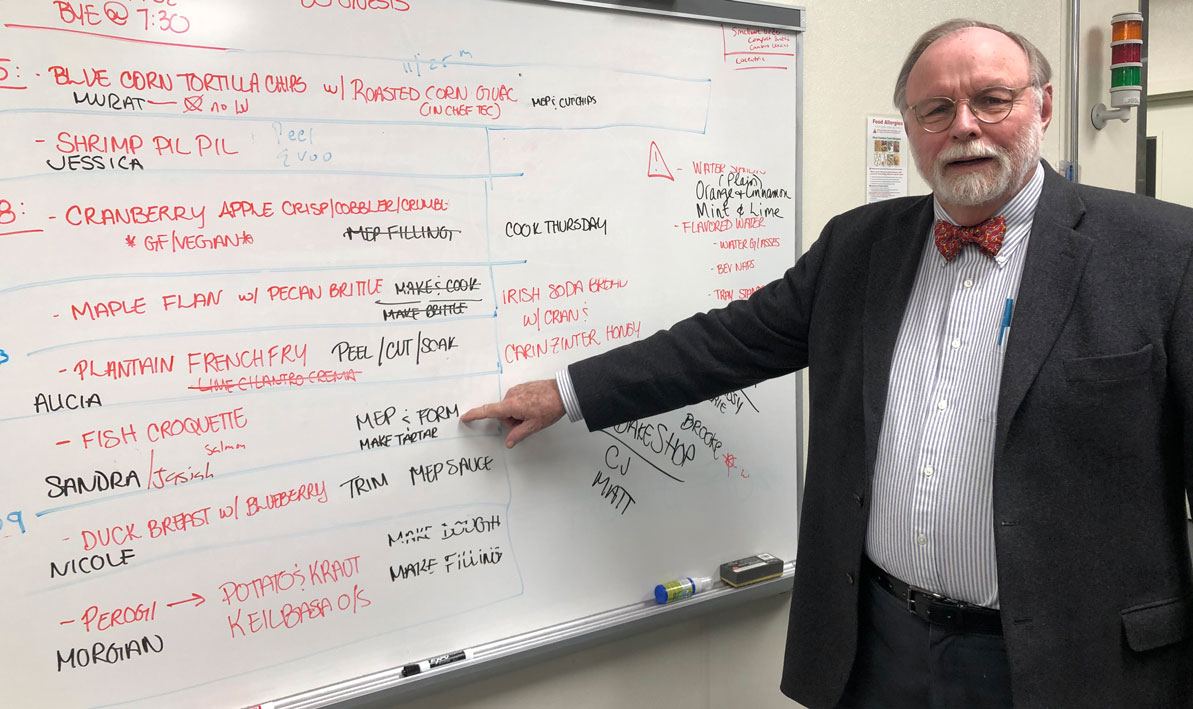 At first glance, it might seem difficult to identify a theme in the following menu:

But that's what students in HCC's Culinary Arts program cooked up for the first Indigenous Peoples Celebration sponsored by the Greater Holyoke Council for Human Understanding and held Thurs., Oct. 24, at the HCC MGM Culinary Arts Institute. While not all the items on the eclectic menu would have been familiar to the region's Native American population centuries ago, the dishes were prepared using ingredients that would have been available to them.

"An event like this is important because we get to focus on a lot of different foods that require a lot of different ingredients you wouldn't normally use on a day-to-day basis," said student-chef Jessica Garza of Chicopee, "ingredients that aren't necessarily common in your own culture. So we get to learn about a special dish, the things that go into it, along with its background as well."

The free event, which drew some 40 area residents for food and a historical discussion led by retired HCC anthropology professor George Ashley, was intended to honor the history, culture and contributions of local indigenous communities.

The idea came from HCC alumnus Jeffery Anderson-Burgos '15 of Holyoke, who serves on the executive board of the Council for Human Understanding, a group that seeks to "improve, where possible, the quality of human development in the greater Holyoke community, irrespective of sex, race, creed, or ethnic origin," according to the center's mission statement.

"With recent efforts around the country to honor the contributions of indigenous communities, I suggested that this would be a perfect focus for an October event," he said. "From there, it has really been a complete board effort to bring it together."

"With the question of immigration such an important thing right now in the national discussion, we felt it would be wise to recognize the fact that the indigenous people here before us taught us a great deal that allowed Europeans to make a life here in the United States," she said.

Also instrumental was HCC English professor Patricia Kennedy, who last spring co-taught a Learning Community course on Native American history and literature with a faculty member at Bay Path University. The lessons in that class ranged from creation stories and folk tales delivered orally from generation to generation to contemporary works by Native Americans.

Those stories, as well as the dishes prepared for this event with ingredients Native Americans would have used, are important reminders that culture was thriving here before Europeans settled, Kennedy said.

In his talk, Ashley, who lives in Hatfield and taught anthropology and history at HCC for 35 years before retiring in 2003, discussed the indigenous communities who lived in the region before the European settlement.

The Agawams and the Nonotucks were two of the groups that lived here and among the first to meet English settlers like William Pynchon, he said.

An unusual sight for the European settlers: Native American women controlled the land, he said.

The English settled in this area in the early-to-mid-1600s. For the first few decades, they purchased most of their food from the natives.

Within 50 years of Europeans settling, diseases they brought here like chicken pox and measles had killed 80 percent of the native population, said Ashley, "simply because they had been sneezed on by somebody who was from Europe."