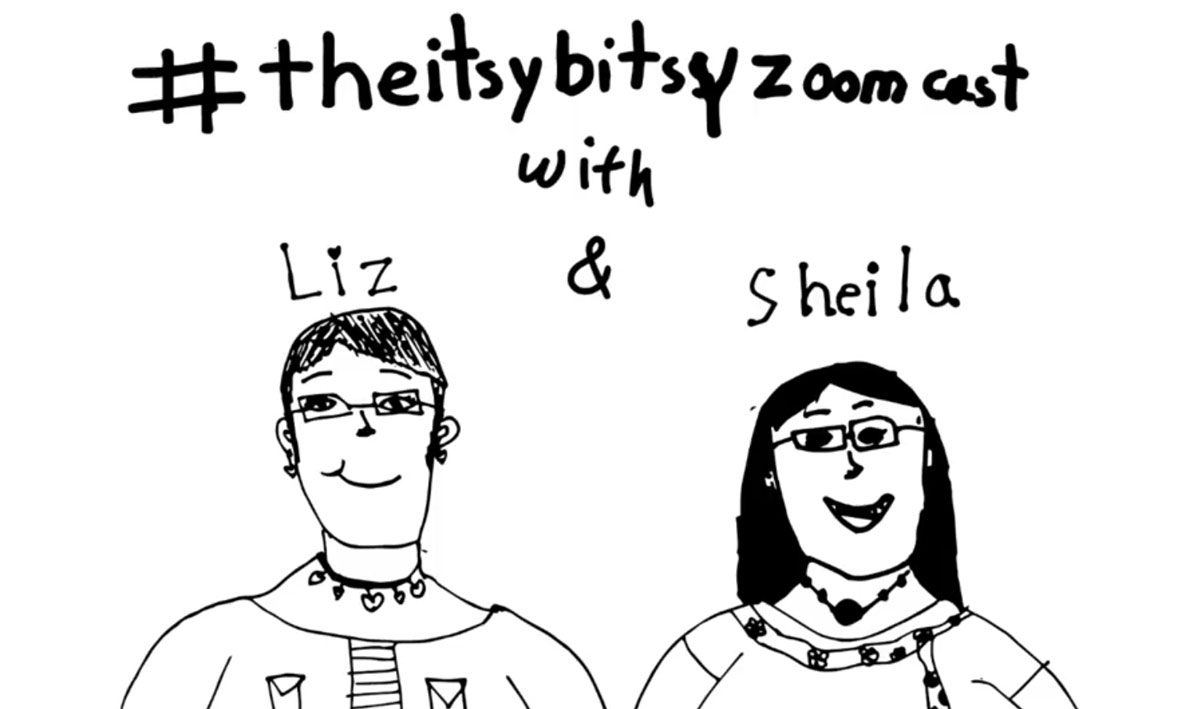 If "The Itsy Bitsy Zoomcast" sounds like something meant for children, that's not too far from the truth. In fact the graphic that introduces this new series of short videos is a child's cartoon sketch of two bespectacled adults, the real-life co-hosts Sheila Gould and Liz Charland-Tait.

Gould and Charland-Tait are part of the Early Childhood Education program at Holyoke Community College and the co-creators of the online series that also has a much more academic and adult sounding title: "The More We Get Together: Conversations That Build Bridges in Early Education."

"We refer to it as The Itsy Bitsy Zoomcast," said Gould, whose 9-year daughter Marianne drew the picture that leads into each show. "It's a nod to the Itsy Bitsy Spider, and the episodes are very short – 15-20 minutes max – but the formal title is the more lengthy one."

As that formal name implies, the show is focused generally on early education and more specifically on re-establishing links disrupted by COVID-19, while also furthering development and training for students and professionals already working in the field.

"When the pandemic happened, Liz was really thinking about all the different ways people working in the field need to stay connected and how much everyone benefits from helping each other," said Gould, coordinator of HCC's Early Education program. "We came up with the idea for a Zoomcast to highlight issues important to the early childhood field in western Massachusetts that would also help our student teachers connect with the professional side of the field they're entering."

A Zoomcast, in case you've never heard of one, is like a podcast, but in a video format. It's recorded over Zoom, the video chat application that has become so popular during the pandemic for people working at home.

Gould and Charland-Tait began working on the Itsy Bitsy Zoomcast at the beginning of the fall semester. The project is sponsored by both HCC and the Western Mass. Professional Development Center, which is based at HCC and funded through a Strong Start Training and Technical Assistance Grant the college received from the Mass. Dept. of Early Education and Care.

Each of seven planned episodes focuses on a different topic and features interviews with professionals from the early education field. Pairs of students from Gould's Education 213 class – Student Teaching – serve as guest hosts. Gould and Charland-Tait help moderate.

"We're hoping the Zoomcast will help create common ground between the students and the employers who will ultimately hire them," said Charland-Tait, lead coach for the Western Mass Professional Development Center.

The first three episodes debuted in October on HCC's Facebook page and are archived on the college's YouTube channel. Future segments will be released over the next two months. The first show, "Intro to the Wild West," served as a prologue to the series and featured an interview with Kimm Quinlan, HCC's director of Early Childhood Grant Initiatives.

The second, "Running a Center – Then and Now: Staying positive during a pandemic," welcomed Mariah Levine, director of Y Kids Pre-school at the Greater Holyoke YMCA, and Felicita Lopez, owner of New Horizons Family Childcare in Holyoke.

The remaining episodes focus on themes such as perceptions of quality; overcoming barriers for parents who need childcare; the power of play; and embracing new COVID-19 guidelines.

The last show will feature Samantha Aigner-Treworgy, commissioner of the Mass. Dept. of Early Education and Care, as the special guest. That episode will be broadcast on Dec. 2 with a Facebook watch party scheduled for 7 p.m. – #itsybitsyzoomcast.

"The show is gaining a lot of traction," said Gould. "Having the commissioner on is a really big deal for our field and a huge deal for us."

Based on the response so far, Gould and Charland-Tait are already thinking about a second season of The Itsy Bitsy Zoomcast during the spring 2021 semester.

"The pandemic has put such a spotlight on early childhood education as people realize how much they depend on childcare," said Gould. "The work is so important and all the attention really presents an amazing opportunity to share and grow, so we're thrilled to come up with this idea, and we hope it continues."