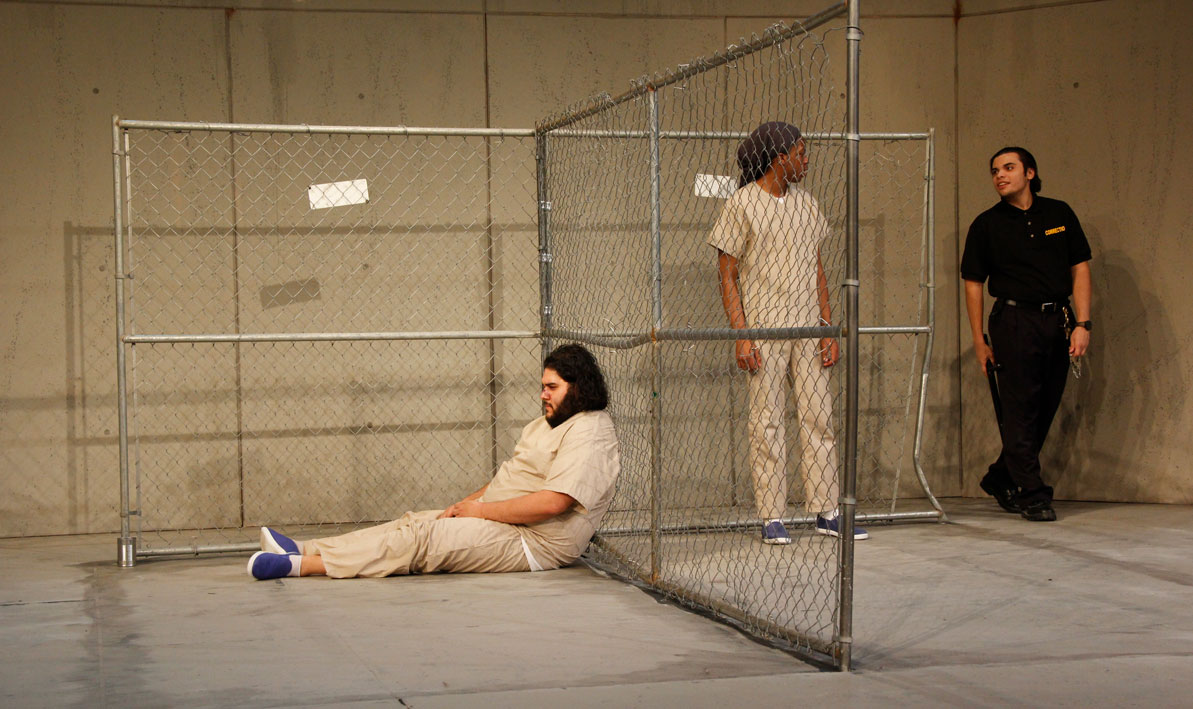 The action takes place in New York City's infamous Riker's Island prison. The plot follows Angel Cruz, who is facing a murder charge after shooting a priest for allegedly forcing his friend into a cult. In jail, Cruz meets another inmate, a serial killer and born-again Christian, who tries to convince him that salvation can only come through faith in God.

Both men face torment from a strict, brutal guard."It's one of my favorite plays because it follows so many themes," said Axel Cruz, an HCC theater alum who is directing the play by Stephen Adly Guirgis.

The HCC Theater Department will present "Jesus Hopped the A Train" Nov. 18-20, at 7:30 p.m. in HCC's Leslie Phillips Theater with a matinee performance on Sat., Nov. 20, at 2 p.m. The Nov. 19 show will be ASL interpreted and closed captioned. All tickets are $5.

The show marks a return to the stage for HCC's theater program after one cancelled season and two subsequent semesters of virtual, live-streamed performances due to the COVID-19 pandemic.

For Cruz, the director, the show marks a return to the HCC stage as well. He graduated from the theater program in 2011 before going on to study theater at the University of Massachusetts.

"It's nice to come back to the place where I started and do something that I love to do," said Cruz, who hails from Chicopee and teaches fine arts at Holyoke's Metcalf Elementary School and sits on the board of Holyoke's Enchanted Circle Theater.

"HCC produces amazing students and amazing work," said Cruz. "Everything I learned in the theater program at HCC has driven me to where I am today. I am so proud to be part of HCC. I've always said, HCC built me, and UMass shaped me."

Cruz says the play is personal to him as someone who has struggled with religion. "One of the things that really struck me is this idea about how we can continue to live asking for forgiveness from something that we can't see," he said. "That's the struggle Angel goes through as he prays throughout the play."

"The play puts a spotlight on race relations," said Cruz. "We have Valdez, a man of color, completely torturing this black man, so what does it mean to have this kind struggle between a black man and Hispanic man."

There's a point in the play when Lucius talks about his past as a drug addict, schizophrenic, and rape victim. He admits to killing eight people. Five in Florida were people of color.'

"Lucius says, only when I moved up north and started killing white people did anyone actually start noticing," says Cruz.

Ironically, it's Lucius, the serial killer on death row, who tries to help Angel find redemption.

"There's a point," said Cruz, "where Angel says, I pray but God doesn't hear me, and Lucius answers, of course he hears you, but you're not listening."