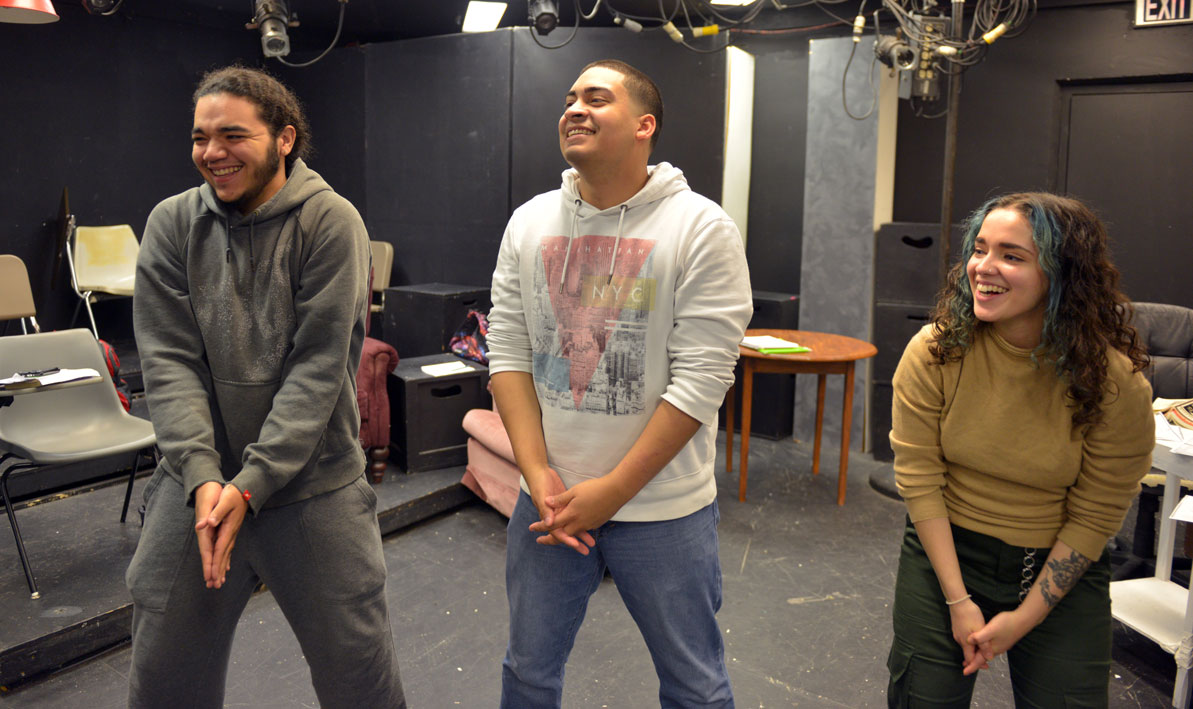 As a new student at HCC in 2018, Alexandra Santiago started out as a communications major.

But last fall she signed up for a class at the college that took her in an entirely different direction. That was "Teatro Nuestro," a Learning Community course that explored identity through the literature, culture, history, politics, movements, and influence of people of Mexican, Central-American, South-American and Caribbean descent.

"Teatro Nuestro" – "Our Theater" in English – actually combined two classes from different academic areas, "Introduction to Theater" and "Introduction to Latinx Studies." The latter was the first course in the college catalog with the prefix LAX, which denotes Latinx Studies, an interdisciplinary program introduced at HCC for the fall 2019 semester.

"I wanted to learn more about the history of where I come from," said the 21-year-old Santiago, who moved to Holyoke from Puerto Rico after Hurricane María devastated the island in September 2017.

By the time the course concluded in December, Santiago had switched her major to Latinx Studies. She will be taking two more courses required for her new major during the spring 2020 semester, which starts Jan. 27: "Latinx Literature," an inter-institutional honors class co-taught by HCC assistant professor of Spanish Raúl Gutiérrez and Sony Coranez Bolton, an assistant professor of Spanish and Latinx and Latin American Studies at Amherst College; and "Latinx Politics," taught by HCC political science professor Mark Clinton.

"I found that I was interested in politics," said Santiago. "With a major in Latinx Studies, I can focus on that. I want to advocate for Latinx people, in some way or another."

"Teatro Nuestro" was co-taught by HCC theater professor Patricia Sandoval and Gutiérrez, co-founder and chair of the Latinx Studies program. Gutiérrez said he hopes more students like Santiago will decide to pursue Latinx Studies, which is offered as a concentration option to an associate degree in liberal arts.

As far as Gutiérrez knows, HCC is the only community college in Massachusetts to offer a Latinx, Latino or Latin American Studies program.

"It makes perfect sense for HCC to have this program because we are an HSI" – federally recognized Hispanic Serving Institution – "and we have a large population of Latino students, or Latinx students, especially those from Puerto Rico," he said.

The term "Latinx" (pronounced "Latin-X") has evolved on college campuses in recent years as a gender-neutral alternative to Latino. But Gutiérrez says the use of Latinx at HCC does not represent an initiative to replace one word with the other. Rather, the choice should be personal, and exploring identity and self-identity is a significant part of the course.

"Being Latino or Hispanic or Latinx or Puerto Rican or Mexican – that's a difficult thing to unpack, and we take a whole semester talking about it," said Gutiérrez, who was born in Mexico, grew up in Chicago, and now lives in Holyoke. "We chose ‘Latinx' because it is the most inclusive term, but that is still problematic. I'm not going to say it's not."

The Latinx Studies program grew out of a $120,000 "Bridging Cultures" grant HCC received from the National Endowment for the Humanities in 2015. The goal was to help the HCC faculty incorporate Latinx Studies material into existing courses with an eye toward new ones.

"In three years, we trained 15 faculty members to be more inclusive and more responsive, adding Latinx Studies material into their coursework," he said, "whether that be a history class or an English class, for example. In the process, we were creating curriculum."

The result was courses that became cornerstones of the new major: "Latinx Literature," "Latinx Politics," "History of Puerto Rico and the Caribbean," and "Introduction to Latinx Studies." Requirements for the major also include an internship or Latinx civic engagement project and electives from a wide variety of other areas of study, such as anthropology, sociology, communications, history race and ethnicity, and Spanish. The program prepares students for transfer to a four-year institution for those who want to complete their bachelor's degrees and pursue careers such as community organizing, law and advocacy, city and urban planning, politics and policy, counseling, and international relations.

"The great thing about Latinx Studies is that you can go in any direction," Sandoval said to students on the first day of class.

Gutiérrez will teach three sections of "Introduction to Latinx Studies" during the spring 2020 semester: one college-level class on campus; one for students in HCC's alternative high school program, Gateway to College; and a third at Holyoke High School.

"My plan is to create a pipeline of students," he said. "I want to do the groundwork and build the foundation for the program. By reaching out to high school students I hope that when they graduate they will decide to come to us."

Gutiérrez notes that the program is not meant just for students of Latinx heritage.

"The students who tend to learn the most are non-Latino," he said. "This type of ethnic studies allows students to find their voices and learn about important aspects of U.S. history and culture."

During an end-of-the-semester class discussion, Najy Knee, one of the non-Latino students in "Teatro Nuestro," gave her assessment.

"I entered this class with a sort of outsider's perspective," said Knee, who is from Chicopee. "I knew a lot of surface history, but I didn't really know the deep undercurrents, like the history of U.S. intervention in Latin American countries. The class very much opened my eyes."

PHOTOS by DON TREEGER: (Thumbnail) HCC theater professor Patricia Sandoval facilitates an acting exercise in an HCC Learning Community course called "Teatro Nuestro," during the Fall 2019 semester. "(Above) Students in the class take part in an acting exercise for the course, a combined introduction to both theater and Latinx Studies.