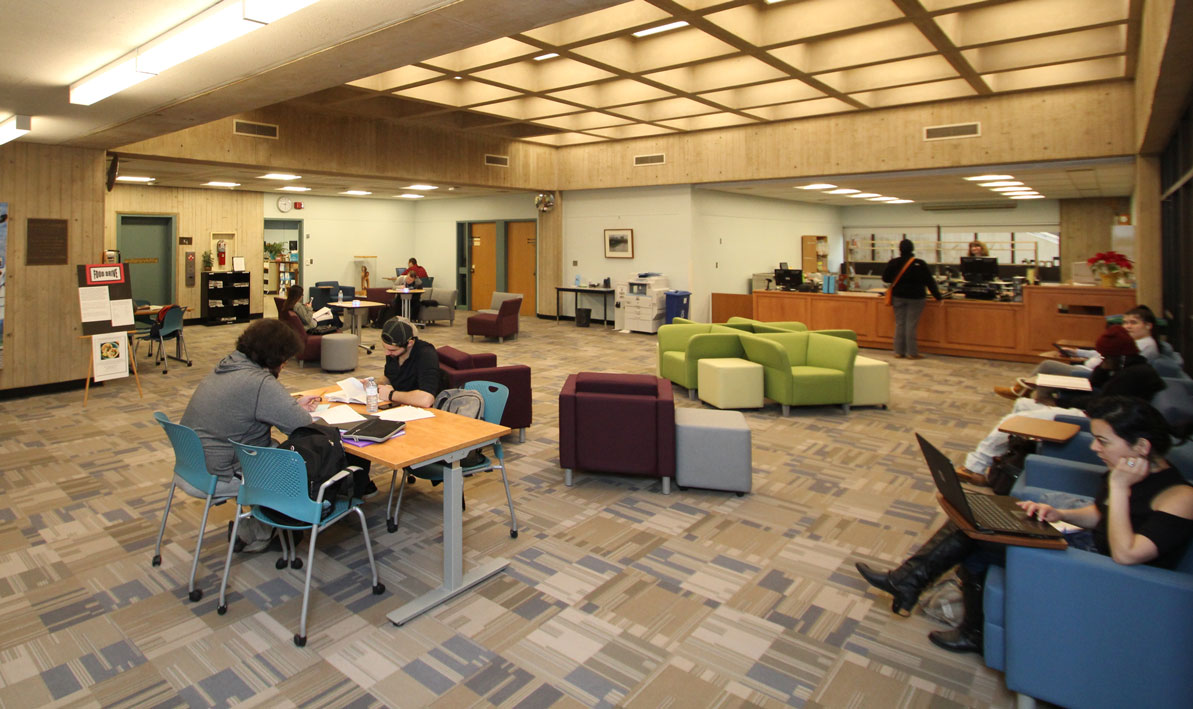 The old, ratchety, hip-thwacking turnstiles are gone now. So too is the electronic gate once meant to deter book thieves. An entire wall was removed and the circulation desk relocated.

Visitors to the Holyoke Community College Library will notice these and many more changes since classes resumed for the Spring 2018 semester. In fact, the library lobby on the second floor of the Donahue building has been completely transformed.

There's new carpet, new furniture, fresh paint, and a lot more room for students who want to sit, relax, and study in a quiet, tranquil space.

"We wanted to make the library more student centered," said Mary Dixey, dean of Library Services. "You don't see setups like we had anymore."

The biggest change was the demolition of the old circulation desk that took up more than a third of the lobby. The new circulation desk is much smaller and set off to the side where the HCC Archives used to be before the wall was removed.

Library reserves are in the back behind the circulation desk, along with specialized CDs, relocated from the second floor. The archives were moved to a smaller corner office. All the changes have added about 500 square feet of study space.

Dixey said modern libraries no longer use the kinds of traffic control devices and security systems they once did, like turnstiles and electronic gates. As book circulation has declined and electronic resources have increased, libraries rely much more the honor system.

"The philosophy today is different," she said. "It's not about control. It's about service. We're just not expecting people to steal."

Even as overall enrollment has declined, library gate counts have held steady to about 100,000 a year, she said.

"People are coming here," she said.

Removal of the old circulation desk has also made it easier for people using wheelchairs to find the elevator.

"It was kind of an obstacle course before," she said.

The $65,000 library renovation began in January and was completed by the second week of the semester.

The library has seen other improvements as well over the past few semesters, including the replacement of long tables with individual study carols on the second floor and the construction of bar-height tables and chairs by the window overlooking the HCC  courtyard.

PHOTOS by CHRIS YURKO: (Above) The newly renovated HCC Library lobby. (Thumbnail) The circulation desk has been relocated to the space where they HCC Archives used to be before a wall was removed.