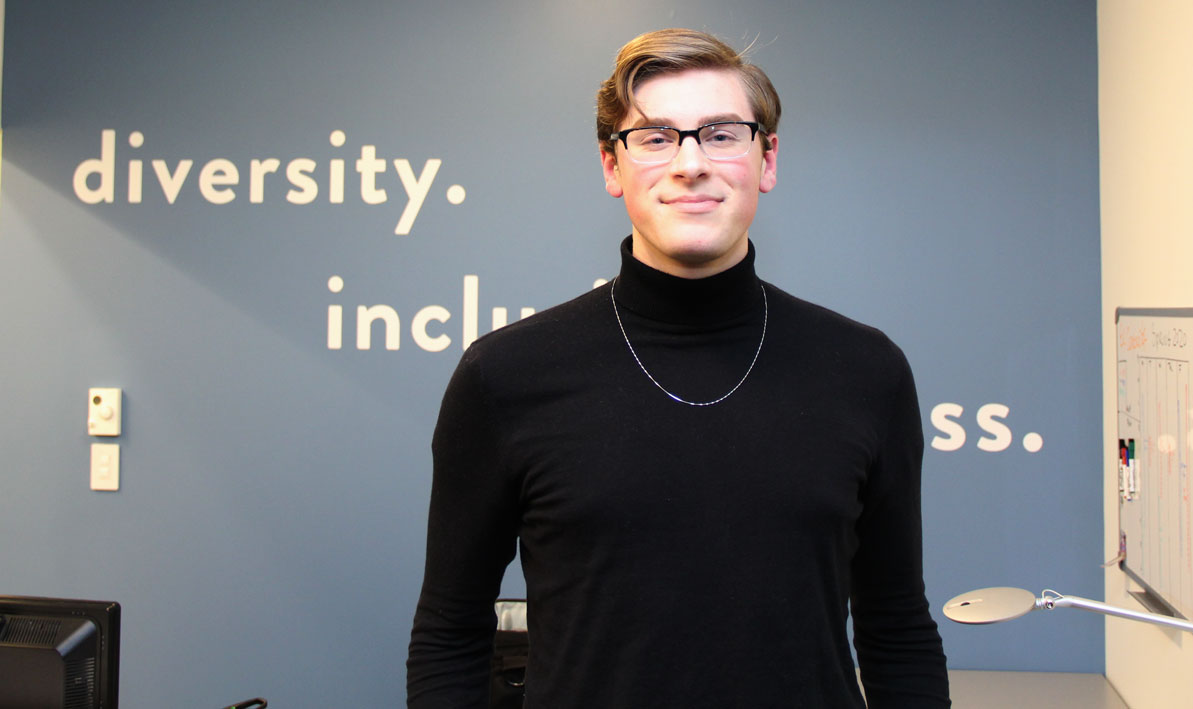 In the campaign for social justice, Marley Friedrick rarely rests.

Just days after completing his studies at Holyoke Community College, on the exact day, in fact, that in an ordinary year he would have been celebrating Commencement at the MassMutual Center in Springfield with the Class of 2020, Friedrick joined a Black Lives Matter protest in Sweetser Park across the street from the Amherst police station. He was planning to do it again the following weekend in Northampton.

"I'm happy to be relaxing after the semester," the 20-year-old said, checking in by phone from his home in Amherst, "but I am not completely relaxing, because of George Floyd's death. So, I'm going to protest and doing everything I can to support my friends of color. Scary times, but I'm happy to be done with the semester."

Friedrick's active engagement will surprise no one who knows him at HCC, where for two years he largely focused his attention on matters related to racial equity and empowering marginalized groups.

For the 2019-2020 academic year, he served as student representative on the HCC Board of Trustees, where he was a vocal advocate for students and faculty of color and co-chaired the Equity and Diversity Committee.

As a student senator, he co-founded an initiative to create resource spaces and support networks for identity groups. He helped re-activate the Rainbow Club (formerly the Queer-Straight Alliance), wrote a student handbook of campus resources for survivors of sexual abuse, worked in El Centro, home of HCC's Multicultural Academic Services program, and volunteered as a New Student Orientation leader, leading campus tours and helping to rewrite orientation materials to better serve low-income and first-generation students.

That campus activism paralleled his academic success. He graduated from HCC in May with high honors and his associate degree in liberal arts.

For all of it, Friedrick was recently recognized with two distinguished awards.

He is the recipient of a Newman Civic Fellowship from Campus Compact, a Boston-based nonprofit that promotes civic engagement in higher education – one of only six community college students in Massachusetts selected for the national award and the only one from Western Mass.

In addition, Friedrick was HCC's choice for the "29 Who Shine," a program sponsored by the Dept. of Higher Education that recognizes one student from each of the state's 29 public colleges and universities. The "29 Who Shine" recipients are typically honored every spring at the State House, but this year's ceremony was cancelled because of Covid-19.

As a Newman Civic Fellow, Friedrick will continue some of the work he started at HCC, but he will do so now as a student at Amherst College, where he plans to study sociology and studio art beginning in September. The fellowship runs through the next academic year and provides opportunities for the undergraduate fellows to attend national conferences and participate in in-person and virtual workshops as they work on community-based projects.

For his fellowship profile, Friedrick wrote, "I try my best to leverage my privilege as a white man to challenge the ways that our institution manifests patterns of institutionalized racism and to make intentional efforts to dismantle these power structures."

For his fellowship project, Friedrick said he hopes to work with House of Colors in Holyoke (part of Enlace de Familias) and its queer youth program.

"HCC is fortunate to have had Marley as a student and we are proud to now count him as one of our alumni," said President Christina Royal, who nominated Friedrick for the Newman fellowship. "He has made a tremendous impact here, and I know he will continue to be a leader at Amherst College and wherever he goes after that."

Friedrick's activism did not begin at HCC. Growing up in the Amherst area he frequently took part in protests and marches and was vice president of the Women's Rights Club at Amherst Regional High School, a place where he says he felt marginalized himself as a low-income, "typical queer" who had never excelled in the classroom.

"All that faltering gave me time to notice the injustices of the world and why we need to act and make change," he said.

At HCC, though, he was inspired by his professors and classes, in particular the Honors Program courses and Learning Communities that explored topics such as gender and women's studies, sustainable agriculture, Latinx literature, and one in particular that could not be more relevant today, an honors sociology class titled "Unnatural Causes: Is Inequality Making Us Sick?"

"I think that really speaks to why HCC courses are so enriching academically and in terms of our lives, because they are relevant," he said. "HCC exposed me to a lot of people who really cared about the social justice and community work that they were doing, and they did truly encourage me to be the best leader and best change-maker I could be."