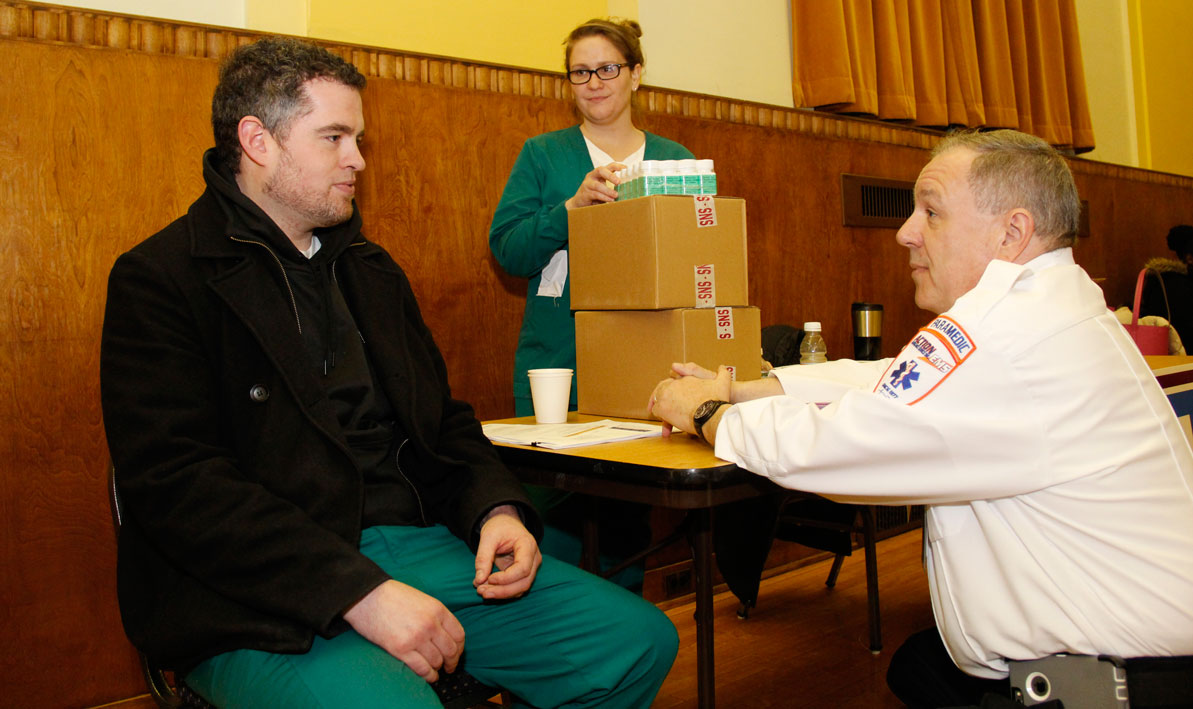 Brenda Jones was on the ground, face down, arms pinned back by police.

Moments before, she'd exploded with rage after a neighbor tried to get ahead of her in line as they waited to receive medication after possible exposure to a biotoxin.

"She's not cutting me!" yelled Jones, an HCC nursing student from Russell.

Earlier, Jones had been at different times a panicking patient, an old woman having a seizure, and a woman helping a very pregnant friend, all situations a nurse might encounter during an emergency.

She played out her dramatic scenes at the Holyoke War Memorial one Friday last month, when more than 100 volunteers, health workers and public safety officials gathered for an emergency drill to practice running a mass medication distribution site in the event of a pandemic or bioterrorist attack.

More than 60 HCC nursing students and faculty members participated in the drill, which was organized by the Hampden County Health Coalition in conjunction with the Mass. Dept. of Public Health and the Mass. Office of Preparedness and Emergency Management.

In the event of a real pandemic or bio-terrorist attack, the Holyoke War Memorial is designated as the primary emergency medication dispensing site. The secondary site is the Bartley Center for Athletics and Recreation on the HCC campus.

In the scenario organizers invented for the Feb. 10 exercise, an active terrorist cell was reportedly operating within the city. Following a reliable threat, a suspicious white powder was found at the HCC Center for Health Education on Jarvis Avenue. A state lab later confirmed the substance to be anthrax, and some people, many of them nursing students at HCC, were exposed.

Jones and her nursing classmates were assigned various roles during the drill. Some played characters with specific physical, mental or medical conditions. One was blind, another deaf, one a pregnant woman whose water broke, another someone who fainted from anxiety. They took turns doling out medication. Others tried to steal it. Some did.

"They're learning about disaster preparedness," said HCC nursing faculty chair Karen Aiken. "These are the kind of things that can really happen, and you can't really plan for them so the students are learning exactly what it's like to be in these situations."

Hilda Gothani played a woman with mental health issues. She needed to be "sedated" after suffering a panic attack. EMTs put her in a wheelchair while she waited for an ambulance. "I thought I was going to die," explained the HCC nursing student from Springfield. "I panicked and started self-harming, cutting myself."

Nursing student Brittney Kane, of Holyoke, waited in line as a concerned mother.

"I'm just worrying about my children," she said, "cause they were exposed, and I was exposed."

When it was her turn, Kane approached the screening table, where she answered questions and filled out a form. Then, retired HCC nursing instructor Lorena Florek handed her two white bottles of "ciprofloxacin," an antibiotic used to treat bacterial infection.

Meanwhile, nearby, Holyoke EMT Michael Clapp was examining nursing student Will Makowicz, of Easthampton, who was playing a man who had consumed an entire bottle of the pills.

"They don't want me to be cipro-toxic," he said. "They're going to have to put me on an NG (nasogastric) tube to get it all out, or induce vomiting."

"Yea," said Aiken, "the students are having a really good time."