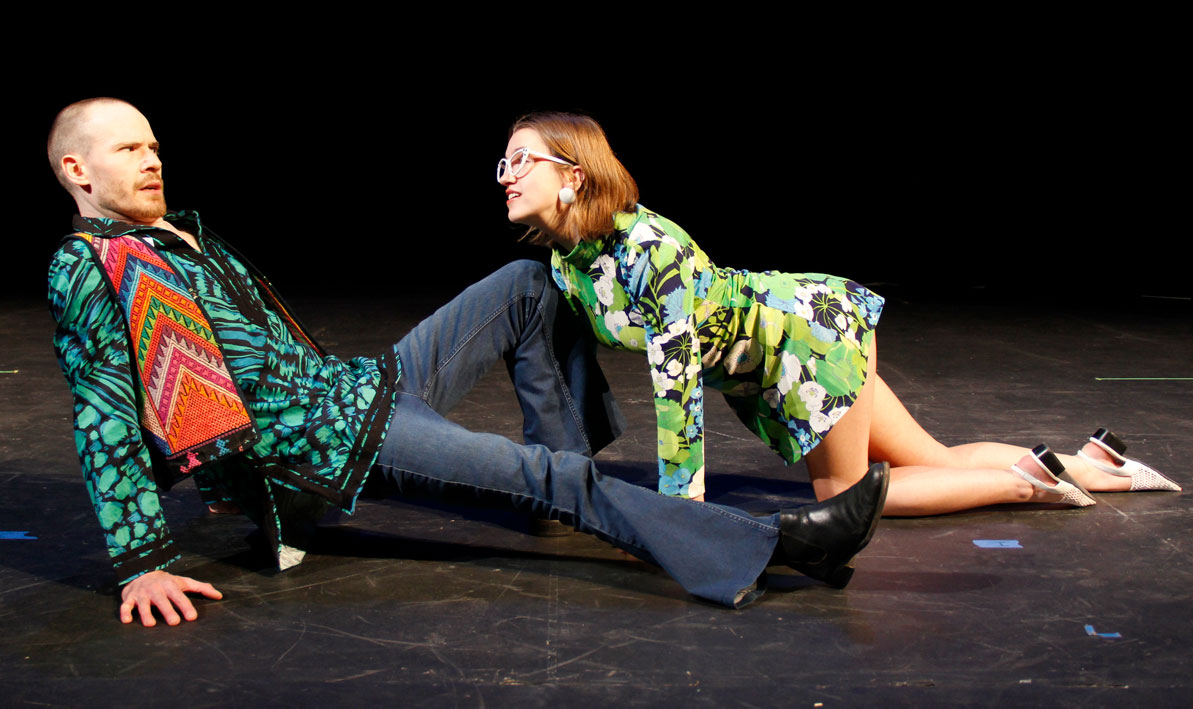 While Shakespeare set his chaotic comedy "A Midsummer Night's Dream" in ancient Greece, it's not the same ancient Greece described in history texts.

Much of the action takes place in a magical forest full of mischievous fairies manipulating the affections of mortals.

"It's a kind of mythical ancient Greece," says Holyoke Community College theater professor Tim Cochran. "When Shakespeare wrote plays, he wanted the audience to escape to a different time, a different place. In 'A Midsummer Night's Dream,' instead of historical realism, he was trying to get people to think about magic and myth. Most of what we know about fairy myth comes from 'A Midsummer Night's Dream.'"

The HCC Theater Department's spring production of "A Midsummer Night's Dream" maintains the play's location – Athens – while shifting the action into a more modern age - the 1960s. Instead of white togas, these characters sport bright floral prints, short skirts, bell-bottom jeans, and tie-dye.

"We've set this play in 1969, right at the point where people were getting into their VW vans and traveling to Woodstock," says Cochran, the director. "We're doing a lot of '60s music. There's some dance, a little singing. Constrained by their parents, the rebellious teenagers in the play escape to the woods, where there is more freedom and love is a little bit more fluid."

In the play, Shakespeare presents a tangle of multiple plotlines. As Theseus, duke of Athens, prepares to marry Hippolyta, queen of the Amazons, a ragtag group of laborers vie for stage time in a play to be performed at the wedding feast. Meanwhile, Egeus solicits the duke's enforcement of his daughter Hermia's pending nuptials to Demetrius. Hermia, as it turns out, loves Lysander, while her friend Helena is in love with Demetrius. The two young couples – and others – run off to the woods, where Oberon and Titania, the quarreling fairy king and queen, dispatch one of their minions, Puck, to sort things out.

"Somehow, Shakespeare crammed these storylines together and it works very nicely," says Cochran. "It's actually a very accessible play. There's something for everybody."

Cochran's last show for HCC, in fall 2020, was an original play called "Fatal Fisticuffs" that relied heavily on streaming technology to present a mix of remote live action and pre-corded video that was presented to audiences virtually during the pandemic.

"I said to myself that when we get the theater opened up again I want to do a piece of Shakespeare that's fun," he says. "'A Midsummer Night's Dream' is quintessential fun. It's really a celebration of theater."

As in all of Shakespeare's comedies, there is a lot of visual humor and bawdy dialogue, but in a Looney Tunes kind of way, suggestive more than overt, such that the production is appropriate for families and all but the youngest children.

"I want people to come out and have a good time," says Cochran. "I mean, it's tough to put on a play like Midsummer in the midst of all this stuff that's going on in the world, but it could also be the escape we need, put a smile on our faces, spend an enjoyable night at the theater, maybe demystify Shakespeare a little bit."