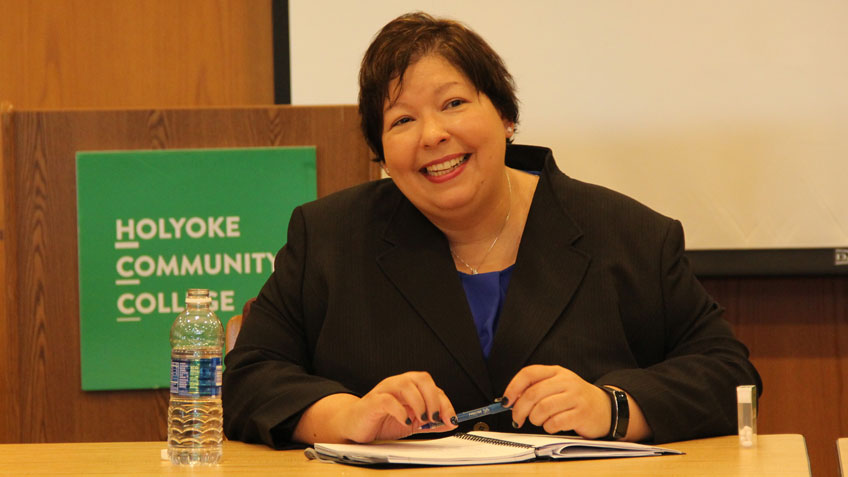 The HCC Board of Trustees voted last night to recommend that Christina Royal be approved as the next president of Holyoke Community College.

Royal, PhD, is now the provost and vice president of Academic Affairs at Inver Hills Community College in Inver Grove Heights, Minn. She was on campus Tuesday and Wednesday for a series of interviews and meetings with the presidential search committee, trustees, staff, faculty and students.

She was the last of three finalists to visit the college.The board of trustees met Thursday night to discuss the finalists, ultimately voting unanimously to endorse Royal. The state Board of Higher Education will consider that recommendation at a meeting in Boston on Tues., Nov. 29.

"We were fortunate to have three highly qualified candidates to consider," said Robert Gilbert, chair of the board of trustees. "During the board's discussion, however, it quickly became clear that Christina was the best fit for HCC. There were so many things we liked about her, in particular her demonstrated success in closing achievement gaps and her sensitivity to diversity. Also, her business background and expertise with technology will be a great asset in reaching out to area employers on issues related to workforce development."

If Royal is approved, she will become just the fourth president in the 70-year history of Holyoke Community College and the first woman to hold the position.

President William F. Messner retired in August after serving for 12 years. He succeeded David Bartley (1975-2003) and George Frost (1946-1975), the school's founding president. Since Messner's departure, William Fogarty, vice president of Administration and Finance, has been serving as interim president.

Gilbert said he hopes that Royal will be approved and ready to start work before the Jan. 23 start of the Spring 2017 semester.

Royal joined Inver Hills Community College in 2013. Prior to that she served as associate vice president for e-learning and innovation at Cuyahoga Community College in Cleveland and director of technology-assisted learning for the School of Graduate and Continuing Education for Marist College. She has also worked as the director of curriculum for The Beacon Institute of Learning and was the manager of research and development at CompUSA.She holds a PhD in education from Capella University and a master of arts in educational psychology and a bachelor of arts in math from Marist.

PHOTOS by CHRIS YURKO: (Left) Christina Royal meets with staff and faculty during her visit to campus Nov. 1. (Right) Royal makes a presentation to the HCC campus community.