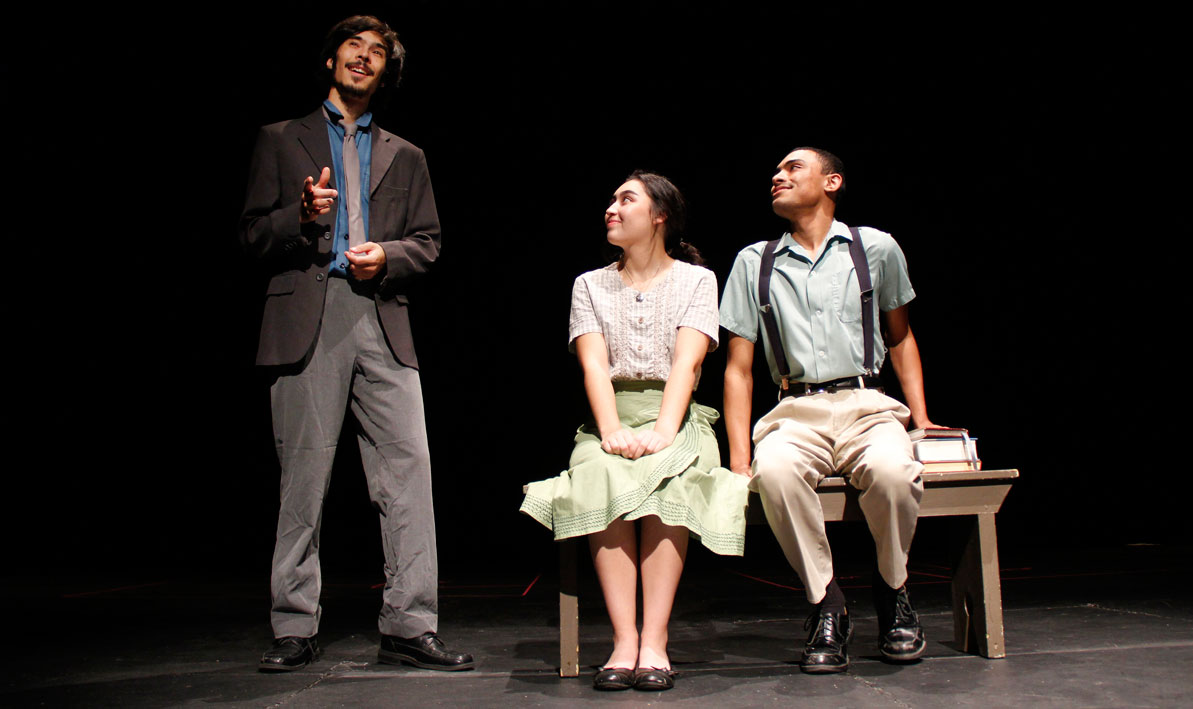 Playwright Thornton Wilder could hardly have imagined the Holyoke of today when he wrote Our Town in the late 1930s.

He had lived for a while in Peterborough, New Hampshire, and set his famous, Pulitzer Prize winning play in a small New Hampshire town he called Grover's Corners between the years 1901 and 1913, a time when the population would have been largely, if not entirely, white.

Current census figures describe the city of Holyoke now as more than 51 percent Hispanic or Latino. Meanwhile, more than 40 percent of students who attend Holyoke Community College, since 2016 a nationally recognized Hispanic Serving Institution, identify themselves as belonging to a racial or ethnic group that is Hispanic/Latino, Black, Asian, or more than one.

It follows that the cast of the HCC Theater Department's fall production of Wilder's classic take on daily life, love and death would naturally reflect that diversity.

"I thought the timing was right to do this play because of the makeup of our present student body," said director and HCC theater professor Patricia Sandoval. "The cast is brown, black, white, and more. The result is a beautiful display of HCC's finest – many of whom are students of color – because that is our town in 2019."

HCC's production of Our Town runs Thursday, Nov. 7, through Saturday, Nov. 9, with performances each night at 7:30 p.m. and a Saturday matinee at 2 p.m. All shows are in the Leslie Phillips Theater in HCC's Fine & Performing Arts building. The Friday performance will be ASL-interpreted.

Taking on what is perhaps the most frequently produced play in America proved challenging, says Sandoval. Most people are likely to have seen the play before or even played a part in a high school production, and so might have certain expectations, though she hopes that familiarity will also draw them in.

"It's such an important work and just a wonderful play," Sandoval says. "It says so much about life and living in the moment and accepting death and ourselves in the universe."

Wilder's story does not follow a traditional narrative arc, with the usual conflict, climax and resolution.

"There are no fight scenes," says Sandoval. "The difficulty for the actors is that they have to find motivation and intention with everything they do, but then life is like that too. Every day does not have a narrative arc, and sometimes our lives don't either."

What little action there is in Wilder's play follows the courtship and marriage of the two principal characters, Emily Webb (Jayda Aponte of South Hadley) and George Gibbs (Brandon Rodriguez of Springfield).

Our Town is presented as a play within a play, with the stage manager narrating the action, taking on certain stage roles while also frequently breaking the fourth wall to interact directly with the audience. In keeping with Wilder's notes, it is frequently performed with little or no scenery or props, the actors employing pantomime instead.

"We're having a set, though," says Sandoval, "which I'm really glad for. I think it's more interesting for the audience and it's easier for the cast to have it grounded in something. They have to rely on their imaginations for enough."

She also incorporated a few props, such as a bowl to hold imaginary green beans in a kitchen scene.

"There's a lot of drinking coffee, and we're not going to have mugs," she says. "We're trying to honor Thornton Wilder as much as possible while also finding a balance."

While Sandoval did not alter the script to make it more current – "It's too beautifully written to change in any way, and you really can't. It's protected" – she did tailor some of the acting parts. ­

"I just wanted to update it, shake it up a little bit and make people think about how we have changed," Sandoval says.

Sandoval also expanded the role of the church choir in the HCC production, inviting the choir from Holyoke's Bethlehem Baptist Community Church to the stage.

"Whenever I do a play, I like to bring in the community as much as possible," she says.