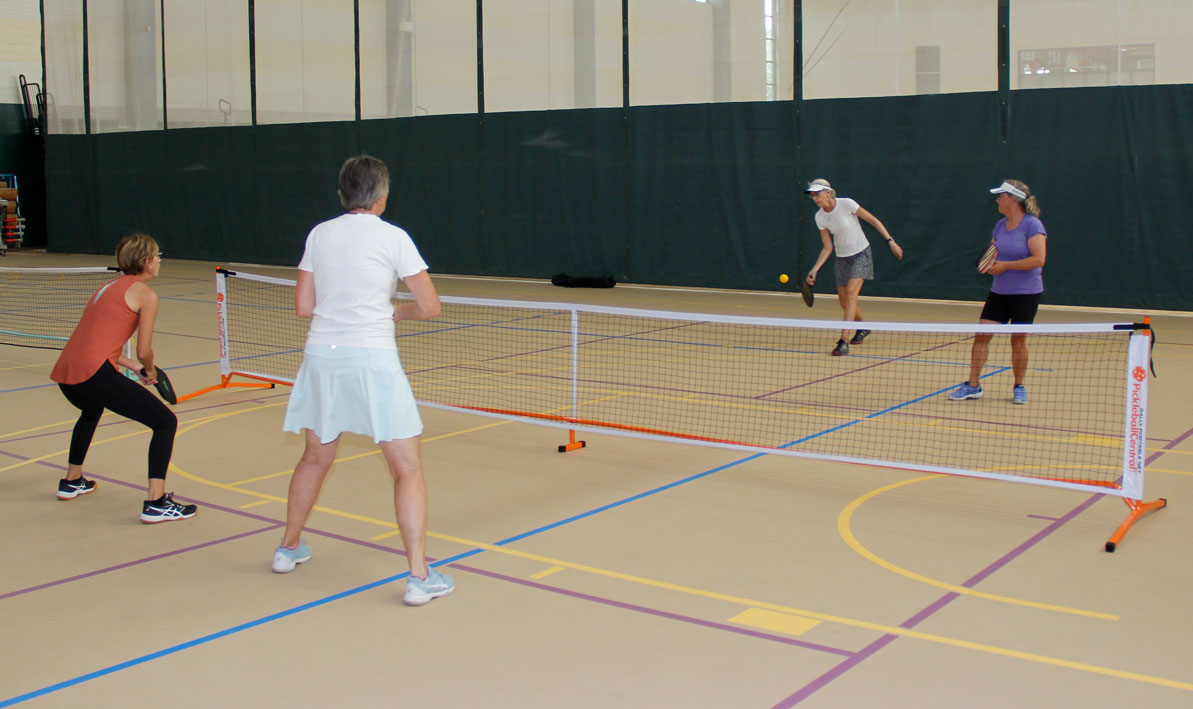 Now, for just a $5 per visit fee, any member of the general public can come to HCC to play what has been touted as "the fastest growing sport in America."

"We're offering the courts and all the equipment – nets, balls, and paddles," said HCC president and avid pickleball player Christina Royal. "We have everything here you need to play, and it's all new."

The pickleball courts at the Bartley Center are available Mondays through Fridays from 7 a.m. to 1 p.m. Courts cannot be reserved in advance but instead are assigned on a first-come, first-served basis. There is no pickleball fee for HCC students and other Bartley Center members.

"It's exciting to create more access to the Bartley Center," said Royal. "We already have a lot of people that utilize the facilities for basketball or for working out in our fitness room. Here's another way we can open up our campus to the community."

Pickleball, which is like a hybrid of tennis, table tennis and badmitton, became possible at HCC after the floor in the Bartley Center gym was redone over the summer. Inserts for existing indoor tennis nets were removed, and  permanent pickleball court lines installed.

"Tennis is a dying sport at the junior college level," said Bartley Center director Tom Stewart, who serves on the Board of Regents for the National Junior College Athletic Association. "There are no junior colleges in New England that have tennis anymore. Tennis used to be so popular you couldn't get on a court. Now people are having a harder time getting courts for pickleball, particularly indoors."

Royal, once a competitive amateur tennis player, started playing pickleball a few years ago at the suggestion of former HCC trustee Julie Pokela. At the time, Royal was looking for a way to get some exercise and relieve some stress from her busy new job at HCC. She found pickleball to be the perfect outlet and a lot easier on her knees than tennis.

"I love competitive sports, and I've played them all my life, so to be able to get back into that was really thrilling," she said. "When I'm interested in something I go full immersion, so I got my own equipment and started playing regularly."

Three years ago, Royal was playing in a pickleball league in Easthampton and invited Stewart to watch.

"She said, I'd love to get pickleball courts at HCC," Stewart said. "The floor was scheduled to be redone anyway. I said, when we redo the floor, we'll put them in."

Stewart and Royal both envision the college hosting pickleball leagues and tournaments.

"In addition to my own passion for the sport, there's a real opportunity here from an economic development perspective for our region to draw more visitors to the area for pickleball," Royal said. "That creates all sorts of business opportunities."

Although she hasn't tested out the new courts yet, Royal said she plans to and is excited HCC will be able to introduce new players to the game and at a very low cost.

"Five dollars is a very low barrier for entry compared to other sports," Royal said. "I think that is a really important part from a community engagement point of view. I want us to be as consistent with our athletics as we are with other services at the college. We're always thinking about access and affordability. To me, this is another expression of that."

The new pickleball courts drew a small crowd the first day they were open in August. One of the players, Barbara Decker of Sunderland, said she usually plays in Amherst.

"We've been buying chalk and drawing our own courts," she said. "This is way better."