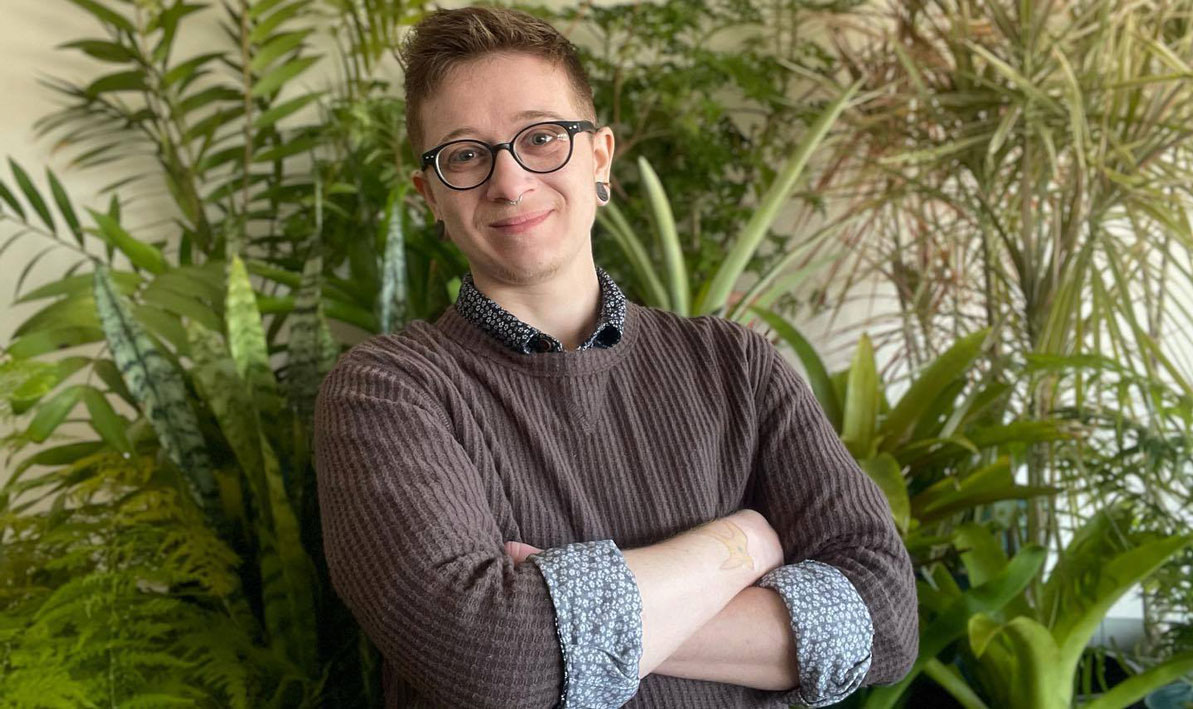 As an 11-year-old middle school student living in New York, Avery Maltz faced many challenges. On top of an undiagnosed learning disability, Maltz had just come out, only to be subjected to relentless bullying from homophobic classmates.

"We actually had to move," said Maltz (they/them). "My family was living on Long Island at the time and we ended up moving up to Northampton, because it was a more accepting place to be. But it was very disruptive, and that was one of the factors that made it really difficult for me to succeed in school."

After graduating from Northampton High, Maltz spent more than 10 years working at various jobs before enrolling at Holyoke Community College.

"HCC is such an accepting and inclusive place," said Maltz, who still lives in Northampton. "I was really able to express my gender identity more here, which has been awesome, because, out in the world working retail and having to get by, even in this day in age I had to present in a very feminine way, and it was difficult to express my true self."

At HCC, Maltz found more than a welcoming community. They also found academic success and a passion for research and scholarship. Maltz, a biology major, is part of HCC's STEM Scholars Program, vice president of service for HCC's chapter of the Phi Theta Kappa Honor Society, president and co-founder of the Neurodiversity Club, a peer tutor, supplemental instructor, and caretaker of the HCC Greenhouse.

Maltz was also one of 28 students nationwide to have their work published in Nota Bene, the national literary journal of the Phi Theta Kappa Honor Society.

To that long list of activities and achievements, Maltz can now add this: national scholarship award winner.

"The Point Foundation considers many factors when assessing scholarship applicants, including academic performance, leadership skills, financial need, personal goals and the applicant's involvement in the LGBTQ community," says the organization's website. "Attention is also given to students who have lost the social support of their families and/or communities as a result of revealing their sexual orientation, gender identity or gender expression."

Maltz was encouraged to apply for the Point Foundation Scholarship by their adviser, Irma Medina, coordinator of HCC's Pathways Program, which helps non-traditional age students transfer to competitive four-year schools.

"From the start, Avery has been immersed in the HCC community," Medina said. "Along with having a strong academic record, Avery is a natural leader. They are not shy about engaging with staff, faculty and other students to explore ways we can improve the student experience to be more thoughtful and caring, especially for LGBTQ students."

Medina cites the college's Neurodiversity Club as one example. The club is based on the premise that people can be diverse in their brain types. Maltz, who was diagnosed with ADHD at the age of 30, founded the club to help reduce some of the stigma associated with conditions such as depression, OCD, or autism.

"I feel so passionate about building community and not having anyone get left behind in the same way I was for a whole decade of my life," Maltz said. "I wanted to create a student network where we could support each other."

The Point Foundation posted a profile of Maltz to its website in June, coinciding with Pride Month.

"As someone who has fought so hard to be in school and come so far, it really felt like such an amazing affirmation of what I'm capable of, and that I deserve to be here doing what I'm doing," said Maltz, who will graduate next spring and hopes to transfer to Smith College or Mount Holyoke. "It just made me think of who I was in middle school when I was getting bullied and how hopeless everything felt and how I couldn't even focus on school, because everything was so bad. Getting this scholarship really made me think about that person and just how excited I would be to see myself now."