Ionesco's 'Rhinoceros' explores the dangers — and comedy — of conformity 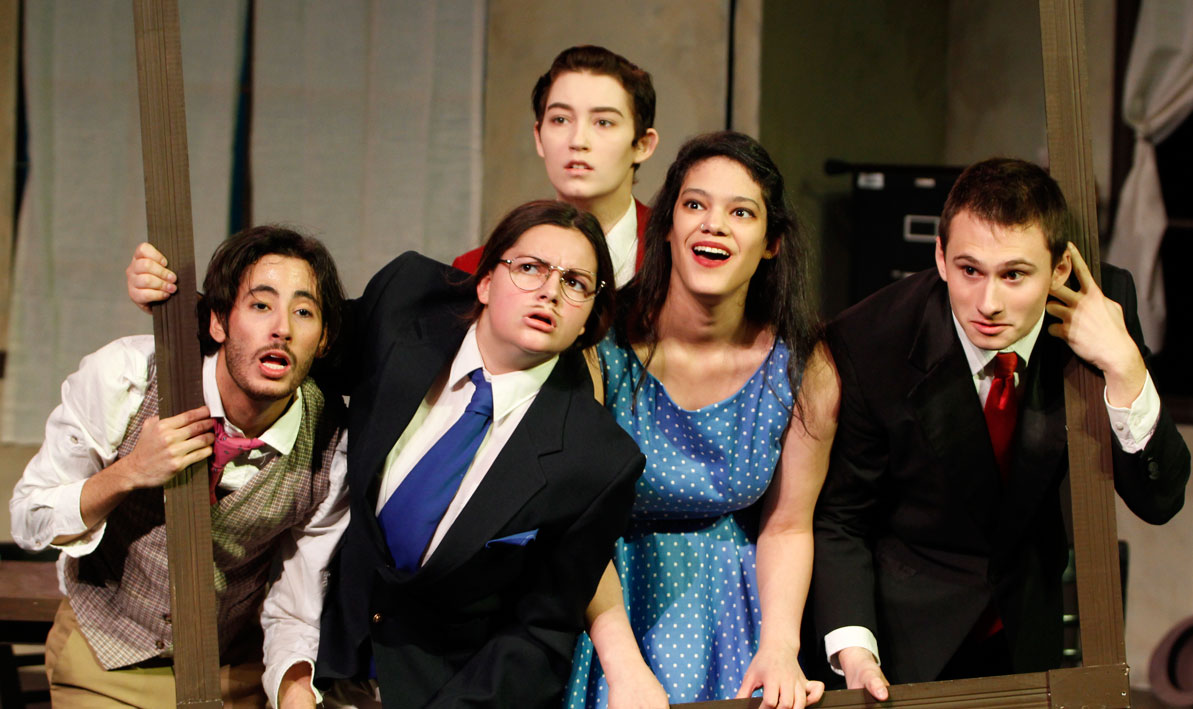 "If you look at some of the farcical, situation comedies of the Three Stooges, Abbott and Costello, and the Marx Brothers, they knew something about timing and physical comedy you just don't see anymore," Cochran says.

"Rhinoceros" belongs to the genre of drama called "Theater of the Absurd." It's an extreme social satire about the dangers of conformity, but Cochran says the playwright incorporates techniques inspired by those old vaudevillian masters — cartoonish characters, clipped dialogue, broad gestures, visual gags — and uses them to advance the story to its ridiculous conclusion.

"When you look at the themes of the play, it appears like a study in sociology about how people so easily submit to dogmatic ideology," says Cochran, "but Ionesco does it in a comedic way. It's supposed to be funny."

The Holyoke Community College Theater Department will present "Rhinoceros" Nov. 16-18, at 7:30 p.m. on the stage of the Leslie Phillips Theater in the Fine & Performing Arts building. There will be a special matinee performance Nov. 18 at 2 p.m. The Friday, Nov. 17, performance will be ASL interpreted.

The premise of "Rhinoceros" is on its face absurd. The play is set in a village whose residents are afflicted with "rhinoceritis," a condition that literally transforms them, one by one, then a few at a time, into rhinoceroses, some involuntarily, and some by choice.

"Ionesco felt his characters were like puppets," says Cochran, "that we are all puppets following the scripts that have been given to us, what we wear, how we talk, the things we say that are cliché — slogans he called them — words and phrases repeated so often in society they lose their meaning."

Amid the ensuing chaos stands — or, rather, slouches — Berenger, Ionesco's unlikely hero, a hard-drinking, unshaven, sloppy, unambitious clerk, played by HCC student Gabriel Cifuentes of Chicopee. As the story progresses, Berenger becomes increasingly isolated as everyone else in the village transforms, or conforms, as it were.

"Berenger becomes the sort of ‘Everyman' by not conforming," says Cochran. "He's trying to be something better than he is but he's always falling back into these old habits. For him, sliding along through life is actually a virtue. That he hasn't subscribed to any philosophy or ideology becomes his salvation."

Cochran said he decided to produce "Rhinoceros" after teaching what is typically a difficult unit on Theater of the Absurd in his "Modern Drama" course last November, which happened to coincide with the Presidential election.

"Students are so used to watching realistic plays about realistic things they started to get really excited about the farcical nature of absurdity and how funny it is to make fun of our own absurd lives," says Cochran. "What we wear, the things we say, who we deify, who we choose for our leaders."

Even though Ionesco wrote "Rhinoceros" in the late 1950s as a kind of penance for not speaking out against the rise of fascism in his native Romania before World War II, Cochran says the play has plenty to say about today's world, where people, often on social media, tend to seek out and listen only to opinions that agree with their own beliefs — and how ridiculous reality can be:

STORY and PHOTOS by CHRIS YURKO: Scenes from the HCC Theater Department production of "Rhinoceros"