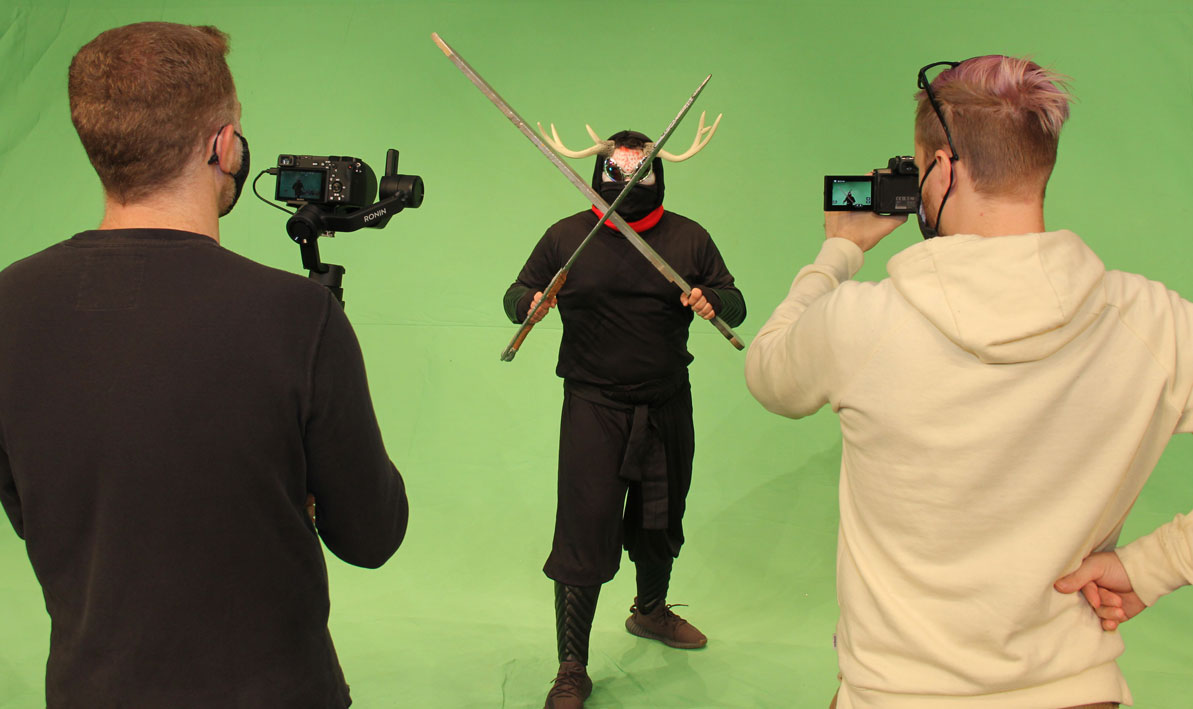 They live alone in boxes, eat artificial food from plastic tubes, and may venture out once a year during an event known as The Opening.

The rest of the time, their interactions are all virtual, coming in the form of holograms, online chats and videogames. That includes Fatal Fisticuffs, the Mortal Kombat-style eSports competition that provides both a literal and metaphorical battlefield for the main character, Clayton Day, played by HCC student Miguel Perez of Holyoke.

"I think people can imagine that this is happening in a world that's forced into quarantine because of environmental issues or potentially because of disease," said the director, HCC theater professor Tim Cochran. "It's a world where people have been driven to this fighting game and are feeling more and more disconnected from each other. There's a thread of loneliness through the whole play, and Clay is really just looking for authentic connection."

The show is free and open to all. It can be viewed on Twitch TV through the website of streaming coach and HCC theater alumnus Cory Missildine at twitch.tv/missildineonline.

In lieu of ticket sales, donations can be made to the Leslie Phillips Fund for Theater Arts and Education at hcc.edu/donate.

The story follows Clay as he encounters Boreas Knight (played by HCC alumnus Matt Haughten), the world's greatest Fatal Fisticuffs player. Knight becomes a mentor to the reluctant Clay, and their relationship threatens a budding romance between Clay and his girlfriend, River, played by HCC alumna Elaine Stoneham.

Though it might seem so, "Fatal Fisticuffs" was not initially written to be performed online. Cochran, Missildine, and playwright Tom Roché, also an HCC alumnus, conceived of the play as a traditional stage show that would also be streamed online and allow for some virtual audience participation.

But in March, COVID-19 shut down the campus and the theater world. HCC cancelled its spring 2020 production of Antigone. Cochran didn't want that to happen to "Fatal Fisticuffs."

"One of the first messages I sent to Tom was, we gotta rethink," Cochran recalled. "Obviously, we couldn't do it the way it was written."

Since then, Cochran said, Roché, an award-winning writer of short films and sketch comedy, has taken the play through at least five major transitions.

"Plays take a long time to develop," said Cochran. "It took him a little while and then all of a sudden he got this idea about how to take the story he had created and remimagining it in a pandemic world, and it really brought the whole show together. The play became more than a story about a video game. It became a play about life, about our lives. I think there's lots that will resonate because the characters are in kind of the same situation that many of us are in today, working remotely from home."

Each performance will include both live and prerecorded elements. Cochran and Missildine spent two days videotaping fancifully costumed actors performing animé-style fight moves against a green screen set up on the stage of HCC's Leslie Phillips Theater. These characters represent the virtual "daemons," avatars with names like Toro, Unicornio, Haruspex, Aurora, Pandamime, and Fatale, who battle in the context of the Fatal Fisticuffs game.

The fight sequences will be interwoven with live video feeds from the homes of the 13 "real" characters, HCC students and alumni acting in front of their own green screens. In real time, Cochran and Missildine will plug in the "sets" behind them and bring all of the disparate audio and video elements together using an online platform called O.B.S. – Open Broadcaster Software – which is used by professionals who stream themselves playing videogames online.

Cochran said the audience experience will be something much different than attending a meeting on Zoom.

"It's the most tech heavy production I've ever worked on, and we've had a whole new set of things to learn," said Cochran. "It's really been enjoyable to watch the discoveries happen. You start thinking, maybe this can be something different. I think after people spend all day on Zoom, they don't want to relax by watching another Zoom. We just get zoomed out. So, if we can create something that's not looking like Zoom, that has sort of a digital theater feel, then we'll have moved the needle a little bit on what can happen in a – quote, unquote – live performance space."

Despite the technological challenges, it's a model he thinks has potential to create a new kind of theater that can't be shut down.

"If we know anything about theater it's that it's endured," he said. "Theater endures because we have a need as people to connect."

Please click here to see a preview of the show ...