'Let us be the teachers we never had, in the schools we were forced to attend, in the neighborhoods people are scared to go to!" 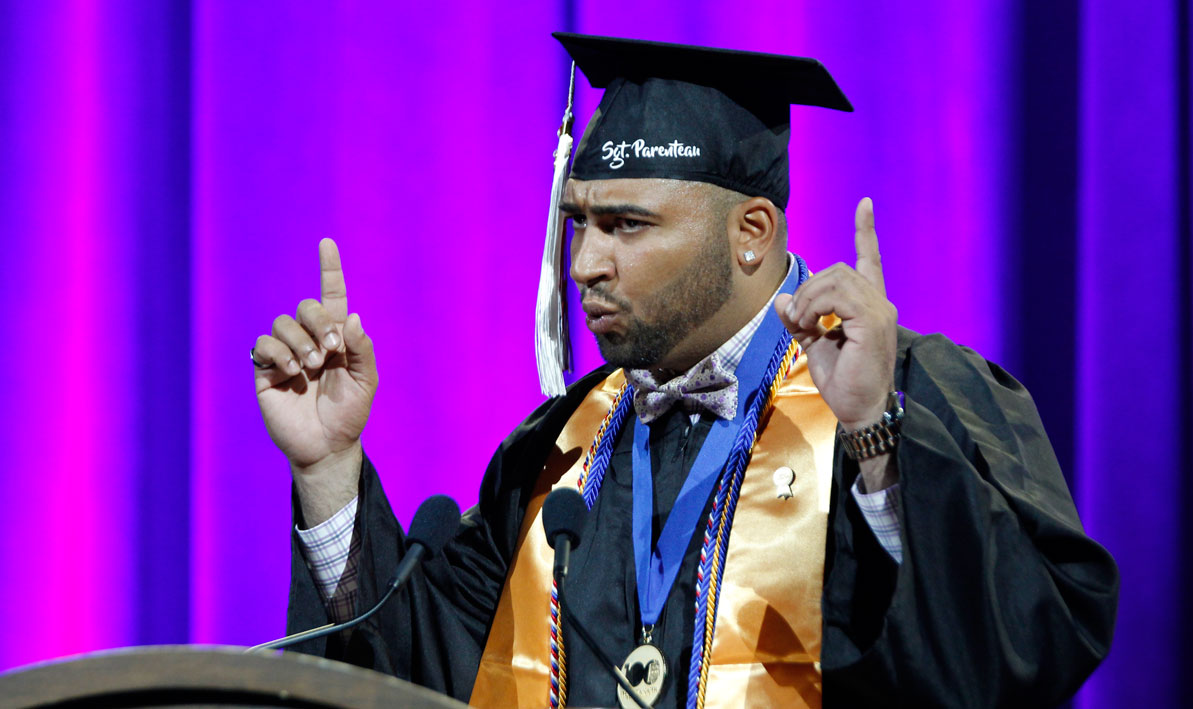 On Sat., June 2, liberal arts major Nicholas Parenteau received his associate degree from HCC with high honors and delivered a powerful spoken word performance of his original work, '153 Years of At-Risk Youth.' Nick was also one of HCC's Profiles of Excellence for Commencement 2018, and you can read more about his personal and educational journey in the story, "The Long Road Taken."

By the age 13 I was arrested, fingerprinted, and convicted
For breaking a window while playing at the park with my friends.
Circumstanced without privilege.
No path laid out before me.
Blind eyed and ignorant
In search for a place
A struggle of the many
Self-aware enough to know that our pigment does not define our level of intelligence.
There isn't a tone of integrity, or a hue of dignity and tolerance
Future determined.
Bleached faced "You will never make it."
Never to be Beat down by the words of Injustice.
A flame turns into a blazing fire, motivational twist to inspire.
Telling myself: This has to be rock bottom, so I can only go higher and higher.
I am that rose that grows in concrete.
A game changer and validator for me my cultural inheritance.
A mover and shaker, a motivator.
A Teacher, soldier, a father, a lover, a neighbor.
Focused, I will never quit. Found myself working harder and harder
I am the uncrowned adversity king.
Feeling so inhuman, dressed in salt of my mother's tears.
Because like the virgin Mary only a mother knows the worth of her son.
Reaching for the sky, and all I see are constellations.
Dystopian ghettos in which our grandmother escaped,
with the hopes of finding the promise land
Leader of the free world promoting fear among the Peace with a simple Tweet.
Finding unity and comfort in my baby's eyes with the hopes that their future will be free
Public schools training our youth to take a seat
when progress has always been made on our feet.
We stood for equality, at the Montgomery Bus.
We stood for some more at Arlington too.
We stood for progress and tangible change
We stood for Women rights and a quantifiable wage.
Peaceful protests turned away by the hands of privileged.
Am I crazy or to we have a weakness
Complacent in our comfort, we turn a blind eye.
History repeats itself like the vintage song from a carousel.
We have our eyes wide shut.
And our mouths wide closed.
Scared to witness the truth.
Emmeline Pankhurst - 1913," Give us Freedom or give us Death."
Eleanor Roosevelt - 1948, "We must not be confused about what freedom is!"
Martin Luther King - 1963, "That one day this nation will rise up and live out the meaning of its creed"!
Elie Wiesel - 1999, "Indifference is not a beginning; it is the end!"
Gloria Allred - 2018, "The equality of rights shall not be denied!"
As the White House still rings with the apparitional sound of "Yes WE Can"! (Barack Obama)
"Si Se Puede"! (Cesar Chavez)
Let us be the teachers we never had, in the schools that I, w,e were forced to attend,
in the neighborhoods people are scared to go to!
Because it's 153 years later and we are still AT-RISK.