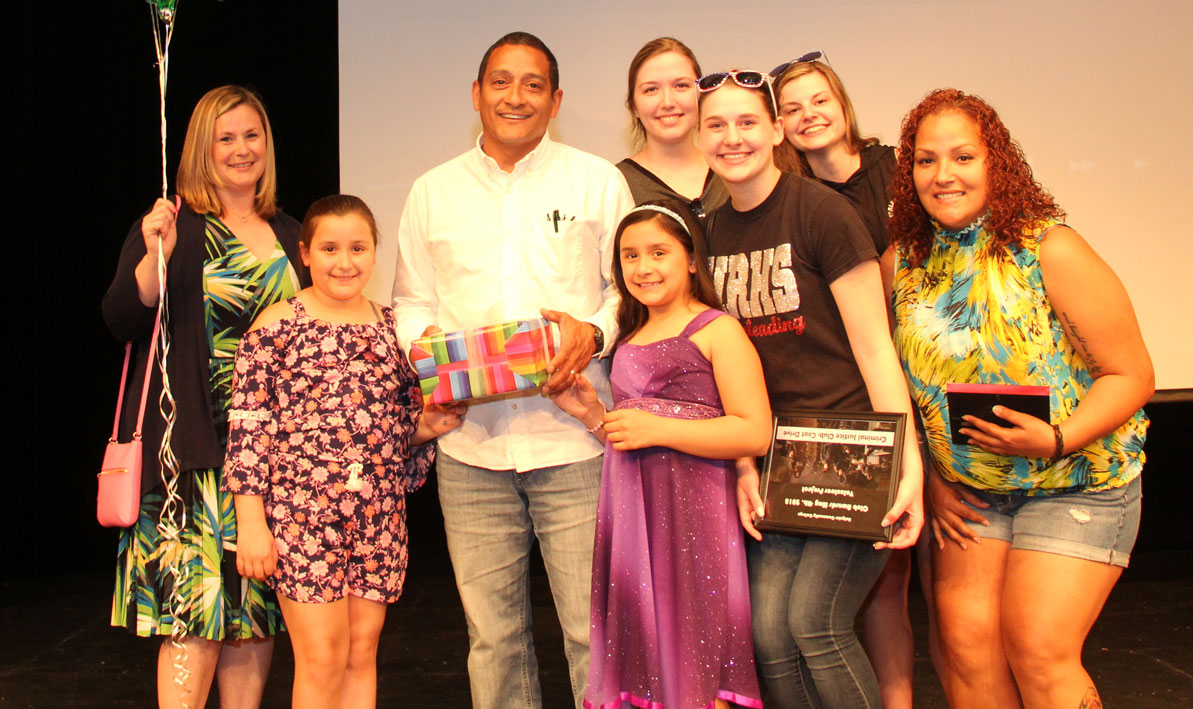 Last fall, HCC professor Alex Sanchez invited a CrossFit trainer to campus to put members of the Criminal Justice Club through a series of physical training sessions around the campus track.

The trainer barked commands. The students stretched. They ran. They did sit-ups, pushups and other exercises. The lesson was clear.

"They all want to be cops," said Sanchez, who was himself one for 20 years, mostly in Springfield. "But a lot of recruits fail out of the academy because they can't do PT."

During the six sessions, Sanchez, the club adviser, didn't just watch his students from the sidelines, though. He came in his workout clothes and sweat right alongside them.

And when Sanchez took the stage of the Leslie Phillips Theater May 9 to receive the Elaine Marieb Faculty Chair for Teaching Excellence Award, HCC's highest honor, many of his students were right there alongside him.

The Marieb Award was endowed by HCC professor emeritus Elaine Marieb '80 to recognize a full-time faculty member who exemplifies outstanding classroom teaching. Award recipients serve for one year and receive a small stipend for professional development.

As the Marieb Award winner, Sanchez will carry the ceremonial mace and lead the procession into the MassMutual Center for Commencement June 2 and give the keynote speech to graduates. Sanchez, whose given name is Alejandro, is a Holyoke native who now lives in Southwick with his wife, Stefanie, and two daughters, Gabriella, 10, and Samantha, 8. He also has three adult children from a previous marriage and is twice a grandfather.

A tenured member of the Criminal Justice faculty, he has been teaching full time at HCC since 2006 and is an alumnus of the college from the class of 1990.

He is a former Holyoke city councilor and served on the city fire commission and planning board. In his 30's, he joined the Navy Reserve.

Sanchez plans to use his Marieb Award to get his certification as a "protection professional" and incorporate that knowledge and experience into his coursework.

"I teach security," he said. "It's good for Intro to CJ classes."

His favorite class, though, is "Police in Society," which covers all aspects ot policing. He derives a lot of discussion material from the news.

"Every day there's something we can talk about," he said, "whether it's human relations or ethics."

As part of that class, he takes students to the gym for a rigorous physical ability test.

"The students come in wanting to do something, and I can help them achieve that," he said. "Along the way, though, I'm going to tell them, you know, there are steps to getting there."

PHOTOS by CHRIS YURKO: (Thumbnail) Alex Sanchez, addressing his colleagues after receiving the 2018 Marieb Award for Teaching Excellence. (Above) Sanchez, center, with his wife, Stefanie, left, daughters Samantha and Gabriella, and four of his criminal justice students.