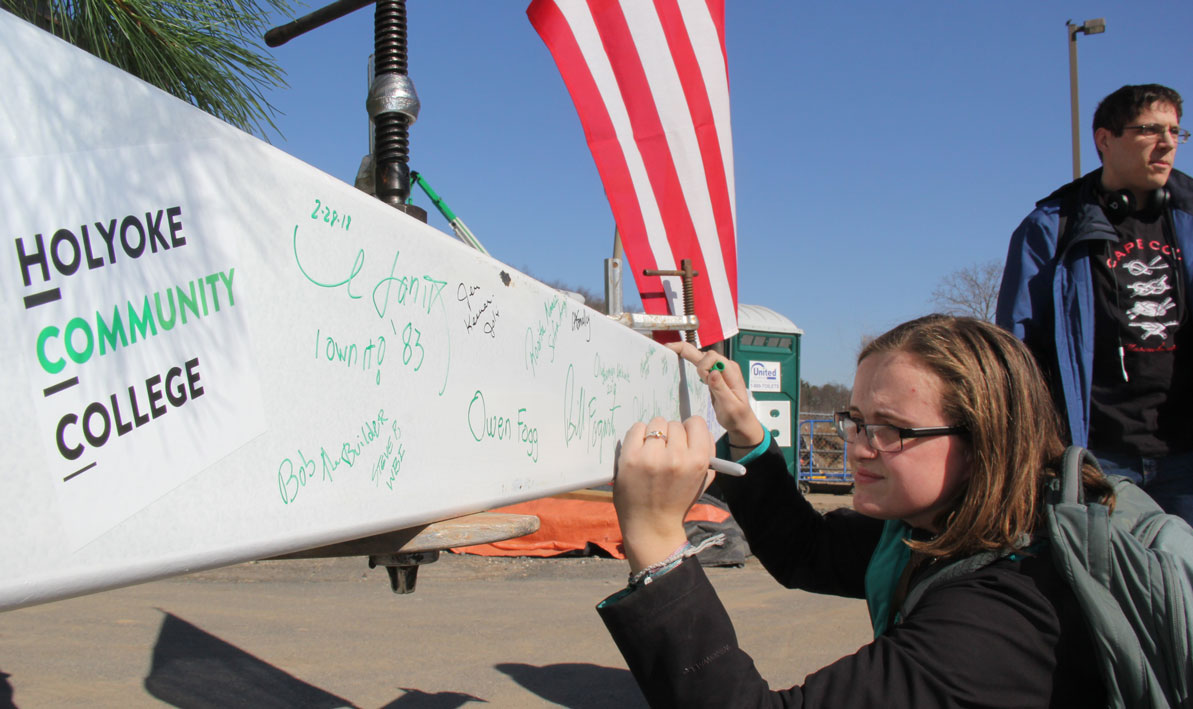 For now, you can still see it, in the top left corner of the Campus Center roof.

But some day soon, that white steel beam will be hidden behind the building's new façade. And there it will remain as long as the building stands, covered with the names of all the HCC students, faculty, staff and construction workers who marked it before the beam was raised to its permanent home.

"Having the opportunity to sign this beam represents the last piece of the building that we're erecting, the highest point," said President Christina Royal, "and while you won't necessarily see it, everybody who signed it today, you're leaving your imprint on history. And that's what it is. This represents our history."

Royal offered her remarks during a "Topping Off" ceremony yesterday in front of the HCC Campus Center, now in the middle of a two-year, $43.5 million, top-to-bottom renovation.

In a construction practice that reportedly dates back to 7th century Scandinavia, "Topping Off" ceremonies are held before the last and highest beam is fixed to the frame of new buildings. Traditionally, the beam is painted white and signed by work crews and others involved in the project and adorned with a small evergreen tree and an American flag.

Topping Off ceremonies are also meant to honor the construction workers, many of whom signed the beam.

The white beam was displayed outside the construction zone for a couple of hours before the ceremony so members of the HCC community would have a chance to sign it. By the time it was lifted, the 10-foot beam was covered with signatures.

"This is an absolutely perfect day for an event like this," Royal said, remarking on the warm air and clear blue sky. "I think the sun reflects the optimism that we all have about this space and what's being constructed behind us."

The nearly 40-year-old Campus Center was emptied and closed a year ago for the project. Since then, the first and second floors have been completely gutted and reconstruction work has advanced on both the interior and exterior.

The main changes include the squaring off of sloping surfaces and the addition of high windows on a new front façade to complement the look of the adjacent and more modern HCC Kittredge Center.

The entire structure will be sealed in a watertight, energy-efficient envelope. A glass atrium entrance is being added to the campus courtyard side of the building. An external balcony will be enclosed and the dining area extended on the second floor. A dedicated visitor parking lot will lead to a walkway bridge spanning a restored brook that was temporarily diverted underground.

The bridge will lead to a new main entrance and into a first-floor "Welcome Center" that will house the Admissions Office, Assessment Center, and Advising, Career and Transfer (ACT) Center, which are all being relocated from the Frost Building.

The Electronic Media and Photography programs will return to the third-floor Media Arts Center, which is getting new ductwork, lighting and ceilings.

"This Campus Center is a massive undertaking for the college," Royal said. "It's one of the largest footprints we have on campus. What's so significant about this space is that it is for students, and this project will have a transformative effect as we bring offices together to help us better support and serve our students."

The building is expected to reopen for the Fall 2019 semester.

PHOTOS by CHRIS YURKO  (Above) HCC student Erin Burns of Belchertown signs the beam for herself and other members of her family who also attended HCC. (Thumbnail) Workers lift the last beam into place for the Campus Center roof.