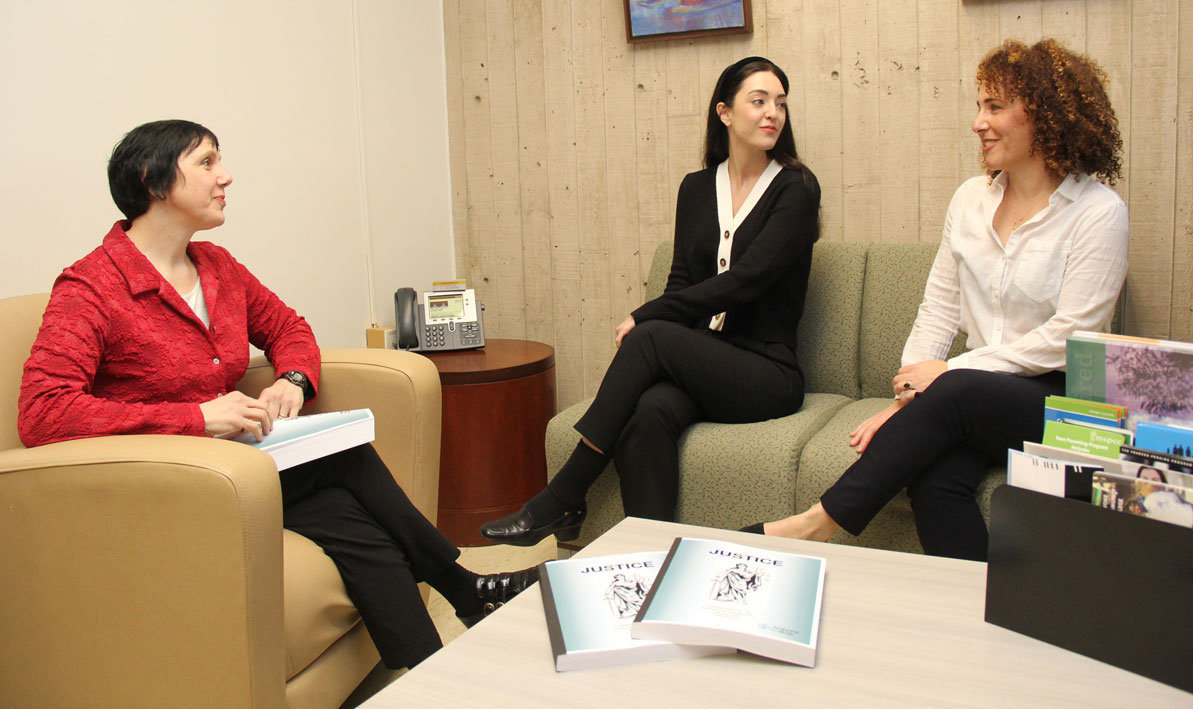 For 31-year-old Bramin, one of the most interesting aspects of the "Epidemics in History" course he took last fall was hearing the opinions of his classmates.

"Our views and stances on certain topics challenged us to consider not only one's thoughts, but their emotions as well," he wrote in an email. "I never realized interpretation of the same reading affects everyone differently on all levels."

By "everyone," he meant residents of the Hampden County Correctional Center in Ludlow enrolled in the online course taught by Holyoke Community College economics professor Mary Orisich.

The course was being offered at the jail through an innovative new HCC program called Western Mass CORE, founded in 2019 by Orisich and her HCC colleague, criminal justice professor Nicole Hendricks, during a joint sabbatical. CORE stands for community, opportunity, resources, and education; its purpose is to help incarcerated individuals transition into higher education.

Hendricks and Orisich are frequent partners in HCC learning communities, courses that combine two academic disciplines focused on a common theme, such as the relationship between socioeconomic conditions and incarceration, or what Orisich calls "the carceral world." The prison education program was a way for the pair to put their commitment to social justice and equity into action.

"Our main objective is to facilitate an academic pathway and provide support for incarcerated people," Hendricks said. "We're building a pathway to college."

HCC belongs to the Massachusetts Prison Education Consortium, whose members affirm that providing high-quality postsecondary education in prison benefits both individuals and society. Western Mass CORE builds on an HCC partnership with the Hampden County Sheriff's Department and the state Department of Higher Education. It is funded in part through a state "Bridges to College Grant." In January, HCC received $58,027 for CORE, a $6,000 increase over the "Bridges to College Grant" awarded to the college in 2021.

In addition to classes, students involved in CORE can take advantage of academic support programs offered by HCC, such as tutoring and writing assistance. Orisich notes, though, that CORE also provides access to non-academic services such as admissions and financial aid counseling, career advising, referrals to housing and food assistance programs, and help with any other potential enrollment obstacles.

"We're providing wraparound support," she said. "We're validating students, saying 'You have a right to be in college if that's a path you want to pursue."

Orisich's seven-week "Epidemics in History" class examined timely issues, such as the differences between pandemics, epidemics, and outbreaks, and lessons learned (and not learned) from the 1918 influenza pandemic.

That course and others he's taken through CORE have clearly inspired Bramin, who asked that his last name not be used. He said he hopes to attend HCC upon his release.

"I'm actually a bit ashamed that it took for me to be incarcerated for me to be willing to further my education," he wrote, "but with these courses I've also learned it's never too late to learn something new. No matter the situation!"

Last summer, so-called "hy-flex" technology ("hybrid" and "flexible") allowed them to teach "Anthropology 114 – Understanding Diversity" simultaneously at both the women's and men's institutions. Students who successfully completed this and the history of epidemics course earned three college credits.

David Cedrone, associate commissioner of Workforce Development for the state's Dept. of Higher Education, said he was impressed when he sat in on one of the Zoom classes.

"I heard rich deep conversation and saw individuals really committed to the experience," he said. "HCC is exploring the nuances of what students coming out of incarceration need. There's so much value in having a college partnership to research best practices for this population and make it work."

And research shows these programs do work. A recent report from the Vera Institute of Justice stated that "Among other benefits to individuals, families, communities, and prisons – incarcerated people who participate in prison education programs are 43 percent less likely to recidivate than those who do not."

Later this spring, CORE – up until now operating out of the two professors' HCC offices – will have a grand opening for a dedicated campus center that includes a lounge and office on the first floor of HCC's Frost Building.

"We need to have a specific space to have a presence on campus," Hendricks said. "This is saying to our students, 'We have an actual location that is specifically for you.'"

CORE courses running for the spring 2022 term include an English class at the Ludlow jail, a political science class taught by an Amherst College professor at the women's center, and a statistics class taught over Zoom at both institutions at the same time.