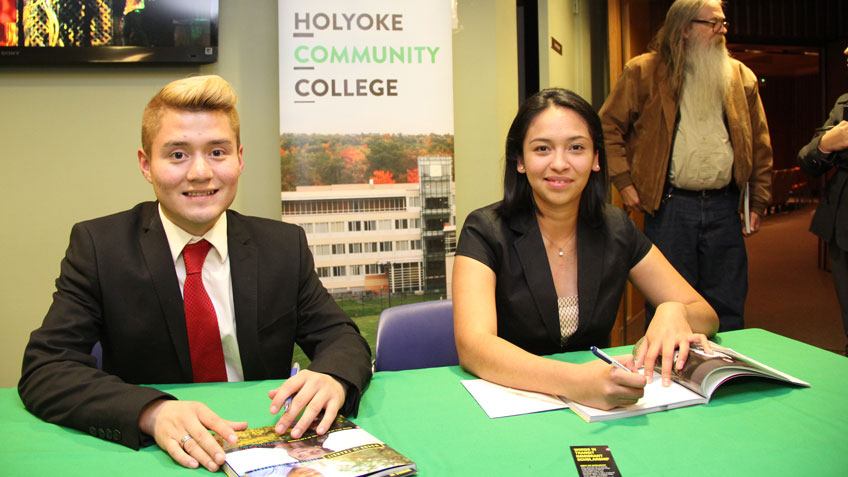 Angelica Merino Monge has told her story many times now. In the newspaper. On the radio. At public events. To teachers and classmates.

It's a story about fleeing gang violence in El Salvador with her mother and brother at the age of 10. About being smuggled through the Mexican desert on their way to the U.S. About struggling to learn English in American schools and yearning to go to college.

For a long time, though, she was afraid to tell her story, afraid of the backlash and scrutiny she could face over her immigration status.  At Holyoke Community College, she learned to be an advocate for herself and others like her, undocumented immigrants who came to the United States as children, looking for a better life.

"My teachers really taught me how to be open about who I am, where I come from, my struggles," she said. "I realized that maybe through my own story I could inspire other people to pursue an education."

Her story is one of 28 featured in a new book from the University of Massachusetts Press called Words in Transit: Stories of Immigrants.

Merino Monge recounted her story again last week from the stage of HCC's Leslie Phillips Theater during a panel discussion about immigration and education celebrating the publication of the book, a joint venture with New England Public Radio. The first-person accounts collected in the book were originally broadcast on NEPR for an oral history project called "Words in Transit."

The Words in Transit book was edited by Ilan Stavans, a professor of Latin American and Latino Culture at Amherst College, who moderated the discussion. Also on the panel: Tema Silk, an NEPR producer who conducted most of the radio interviews; HCC professor Raul Gutierrez; and Bryan Torres, '14, an HCC alumnus now at Amherst College whose account of leaving El Salvador alone at the age of 12 is also in the book.

Merino Monge, a graduate of Amherst-Pelham Regional High School, and Torres, a graduate of Northampton High School, came to the attention of NEPR after talking to a newspaper for a story about the Deferred Action for Childhood Arrivals Act, which in 2012 granted temporary residency to certain undocumented immigrants who came to the U.S. as children.  The two were again featured in news stories for their role in organizing the 2015 Out of the Shadows march in Amherst, which was meant to bring attention to the plight of undocumented immigrants and DACA students.  They were then recorded by NEPR for "Words in Transit."

"I had never told my story, my full length story, to anyone, especially on the radio," said Merino Monge, who now lives in Northampton, "so that was a new experience for me. The reason I did it, I guess, was to raise awareness about undocumented people, but more specifically about undocumented students."

Merino Monge said the turning point for her came in an HCC Learning Community course she took called "Give me your tired, your poor: Immigration, Identity & the Struggle for Social Justice" taught by Gutierrez and HCC political science professor Mark Clinton.

"This immigration class really opened my eyes to stuff that I had been struggling with since I was 10 years old," she said. "I knew that I was undocumented, but I didn't know how much it affected me until I got to college."

Merino Monge will graduate next spring with her associate degree in liberal arts. She is president of the Latino International Students Association, the LISA Club. She has earned several scholarships from the HCC Foundation and last spring won the award for Outstanding Student in Political Science. Outside of school, she tutors migrant farmworkers enrolled in the "Planting Literacy" program at Head Start in Springfield, and she is an intern at the Holyoke Public Library, where she translates documents and forms for a Puerto Rican history project.

She also works 35-40 hours a week as a personal care assistant and dietary aide at Center for Extended Care in Hadley. Because of her immigration status, she does not qualify for financial aid. She also must pay between $200 and $1,000 every two years to maintain her DACA status.

"I think education is as important to me as it is for anyone, to get ahead, to be someone in life, to do what you want to do," said Merino Monge. "For me, it's especially important because I've had to fight for it. I know the value of what I'm paying for. I think it motivates me even more to get good grades and make the experience at HCC as rewarding as I can."

Proceeds from the book will go toward a new scholarship at HCC for student-immigrants administered by the HCC Foundation called the Words in Transit Immigrant Scholarship. The suggestion to make HCC the beneficiary of those funds came from Stavans, who first conceived of the idea for the "Words in Transit" project with NEPR.

"I have been having students that come from HCC to Amherst where I teach, and I have been involved here with classes and faculty and the administration," said Stavans, who is himself from Mexico."I love this place," he said of HCC. "I think the American story is really told here, so I think that by funding students here we end up funding people all over."

The book is available at UMass Press at: http://www.umass.edu/umpress/title/words-transit

You can listen to the original radio interviews at: http://nepr.net/wordsintransit/  To make a donation to the Words in Transit Immigration Scholarship fund, please go to: www.hcc.edu/donate