"You just got to keep showing up, going in every day, and doing the best you can." – Michael Anderson '89 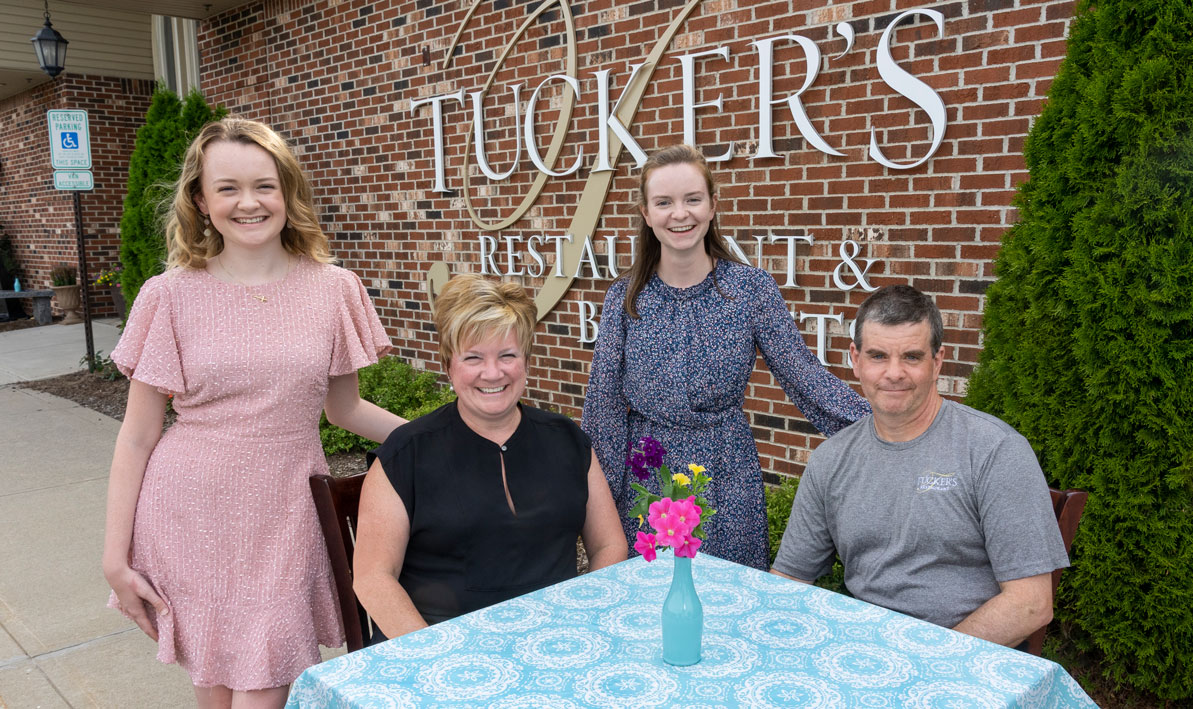 Editor's Note: This profile also appears in the Fall 2020 issue of HCC's Alumni Connection magazine as part of a series of stories about HCC alumni managing life and work during the pandemic.

When he was a hospitality management student at HCC, and working nights under his culinary arts professor, the late chef Leonard Marquis, at Storrowton Village and Carriage House in West Springfield, Michael Anderson '89 did not learn anything specifically that would guide him years later as a restaurateur weathering a pandemic.

But his classroom and kitchen training did foster at least one key ingredient that is helping him now: perseverance.

"I just keep going at it every day," said Anderson, who has owned Tucker's Restaurant in Southwick, Mass., for 21 years with his wife Karen '90. "You just got to keep showing up, going in every day, and doing the best you can."

It's no secret how much COVID-19 has hobbled the restaurant industry, and pandemic relief funds may not be enough to sustain some businesses, according to one association group. Even though Tucker's received a federal loan in May through the Paycheck Protection Program, "We're in a pickle here," Anderson said.

He is, however, "cautiously optimistic" that they will pull through by adapting to the times and maintaining the quality for which they have been known, first at a smaller location on College Highway, and, since 2006, across the street in a larger space with a banquet facility.

"We've never cut corners at Tucker's, and I want to keep it that way," Anderson said one day during a break from the kitchen. "Every day I'm on the line. We're making stocks, making salad dressings, using fresh ingredients all the time."

Adapting meant switching to takeout on March 18, a day after Mass. Gov. Charlie Baker mandated that restaurants stop dine-in service. The Andersons made sure their customers knew through Facebook postings and signage that they could still order meals for curbside pickup.

The customers are "a big part of what's helping us get through it," said Karen, banquet and sales manager. "We have customers who generally care and want us to succeed."

When Massachusetts' reopening plan allowed for outdoor dining starting June 8, the Andersons rented a tent and put a couple of tables underneath. When indoor dining resumed June 22, they moved some tables into the banquet area and began serving diners in there as well. Still, as of mid-July, only about 25 percent of customers were dining in.

"I don't believe people are ready to come out now," Michael said.

Nevertheless, they keep the menu interesting with daily additions they advertise on their Facebook page, such as "Southwestern Orzo and Grilled Vegetable Bowl with Corn Pico, Cilantro Sour Cream and Shrimp."

They also share memories there, such as one on July 16 for Karen's birthday that shows a photo of her blowing out candles from the previous year. "Stop by for dinner or takeout this evening and wish Karen a happy birthday!" the caption says. "Look at the delicious cake made last year by Joanna!"

Michael and Karen met at Storrowton Village, where she was a hostess and he had worked his way up from dishwasher to executive chef. For a few years, he ran a catering business and then the kitchen at Yankee Candle's Chandler's Tavern in South Deerfield.

On his first resume, Michael stated that his goal was to own a restaurant. In 1999, when an old building went up for sale closer to their home in Westfield, he saw his chance. He named it Tucker's in honor of William "Tucker" Kavanaugh, the late owner of Storrowton and a mentor.

Meanwhile, Karen, a business administration major at HCC, had worked as a project manager at Massachusetts Mutual Life Insurance Company for 18 years before taking over "front of the house" operations at the restaurant in its new location, scheduling and managing events and overseeing the dining room staff.

PHOTO by MICHAEL GORDON: Karen and Michael Anderson with their daughters Payton, left, and Paige, outside the family's Southwick Restaurant.