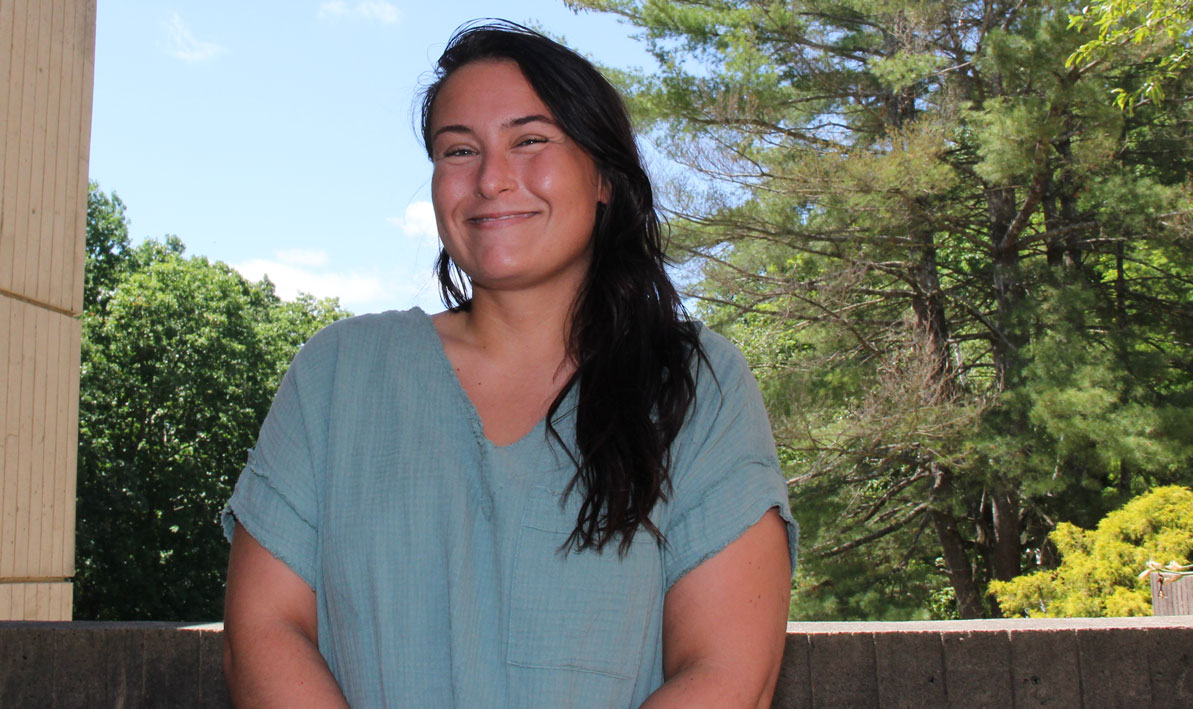 When Carly Carpenter first met Apollo, she was 18 and he was 6.

She had just graduated from Gateway to College, an alternative high school program at Holyoke Community College. He was her graduation gift, a retired racehorse.

"I started horseback riding when I was about four or five years old," she said. "We've always had family dogs. I've been obsessed with animals from the get-go."

Apollo, a flea-bitten gray thoroughbred, had been seriously neglected by his previous owner. He came to Carpenter malnourished, underweight and ailing, and she worked closely with Apollo's veterinarian to nurse him back to health.

"He'd come from a tough situation," said Carpenter, who lives in Westfield. "It was really cool to see him thrive and turn into this amazing horse. He is the funniest, quirkiest horse in the world. He has such a personality on him. I just love him."

To that end, she's already got a good start. She works full time as a surgical technician at the VCA Montgomery Road Animal Hospital in Westfield. Now 24, Carpenter graduated from Holyoke Community College in June with her associate degree in veterinary and animal science. This month she'll take her national exam to become certified as a veterinary technician. Then it's on to the University of Massachusetts Amherst in September for a two-year pre-vet program. After that, she hopes to enter the doctor of veterinary medicine program at Tufts University.

"It's a lot of schooling, but I would not trade it for anything," she said. "I just know that this is what I'm supposed to be doing."

Although Carpenter has long had an interest in animal care, she once worried she did not have an aptitude for the coursework required to become a vet. She struggled at Westfield High – "just not the right fit for me" – and with science in particular. That led her to Gateway to College at HCC, a dual enrollment program that allows high school dropouts and those at risk for dropping out to earn their high school diplomas by taking college classes.

"I loved Gateway," Carpenter said. "I would not be where I am without it."

After Gateway, Carpenter continued on at HCC, where she not only overcame her anxiety about science but discovered an affinity for it.

"I had always had veterinary medicine in the back of my brain, but I didn't know if I was going to be able to pass all the science and math classes," she said. "HCC taught me that I can. My professors were so supportive. They taught me that I'm capable. The opportunity I was given here is just incredible. I can't say enough good things about it."

To put herself through school, Carpenter worked 40 hours a week at the Montgomery Road Animal Hospital while completing her degree. Still, she graduated with honors and received the academic award for Excellence in Veterinary & Animal Science.

As a surgical technician, Carpenter helps with anesthesia, intubation, and post-op recovery, and counsels clients about what to expect while their pets are healing. Given her job, she has a strong interest in surgery, but she's also drawn to the kind of work being done by a nonprofit charity called Street Vet that provides veterinary services in homeless shelters and on the streets to people who can't afford to pay.

"That sparked something in me," she said. "There are a lot of communities out there that need help. I would love to get more into shelter medicine and help homeless people and their pets."

Besides Apollo, Carpenter takes care of Jax, a Texas dog she found online and adopted through a nonprofit called Rescue Road Trips that transports rescue dogs from the South to welcoming new homes in the Northeast.

"There is an incredible stray problem down south, and, unfortunately, a lot of dogs are just dumped on the side of roads," Carpenter said. "Jax was dumped in a junkyard. We're not really sure what he is. We tell him he's half perfect and half amazing."

Due to her work schedule, Carpenter had to postpone a trip this summer to Peru with a nonprofit called The Nuñoa Project, which provides veterinary services to alpaca and llama farmers in the Andes Mountains. She hopes to go next year.

Instead, when she's not at the animal hospital or at home, you'll most likely find her – seven days a week – at Red Road Stable in Southwick, riding and taking care of Apollo. "He's my best friend," she said. "I like the whole barn atmosphere. A huge part of horse ownership to me is not just riding, it's everything in between, you know, like cleaning the stalls, and all of that fun stuff."