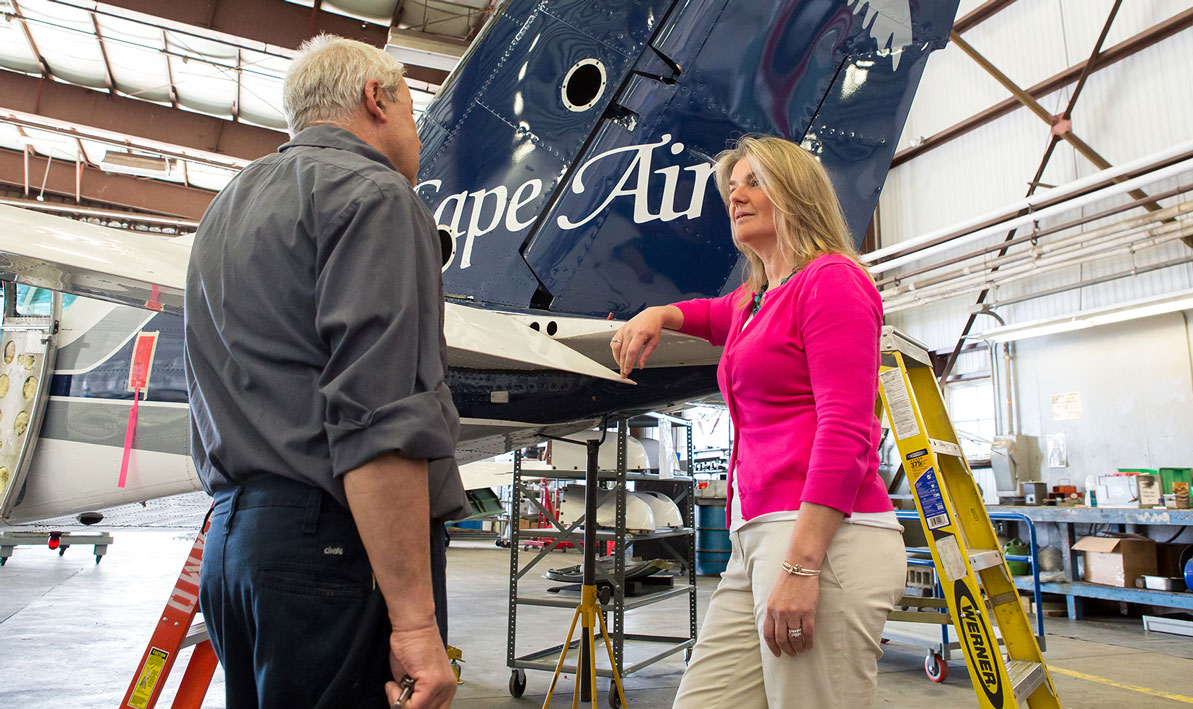 Growing up in Westfield, the youngest of six children in a blue-collar family, Linda Markham, '83, never imagined that one day she would become the first female president of a U.S. airline company.

Markham's mother had wanted her to be a nurse. Though still unsure about her future, upon high school graduation, Markham knew nursing wasn't for her.

She followed friends to HCC, was impressed by the Admissions staff, and knew she could afford to attend — with money her mom had saved for nursing school.

"There were students from all over Massachusetts of all different ages," Markham says of HCC. "It was diverse. People wanted to help each other."

She wound up majoring in business and retail management and experienced a few pivotal moments that led her to continue down that career path. One came in a business law course, where she learned how to ask the right questions before making a decision.

In another, students set up their own stores. That taught her about all the facets involved in running a business.

"You had to hire a team," she says. "You had to think about your budget, your personnel, your tools, your resources. I think that's basically a lot of what my work at Cape Air is today."

In 2013, Markham became the president and chief administrative officer of Cape Air and its sister company, Nantucket Airlines, making her at the time the only female president in the male-dominated U.S. airline industry. Her first move as president — creating paid maternity and paternity leaves. That's because the heart and soul of her work is in engaging and supporting the company's 1,200 employees, she says. Case in point: She also co-founded the Cape Air Resources for Employees Fund to aid employees in financial crisis due to a death in the family, a fire or other tragic circumstance.

"We're an organization that cares," she says. "Our leaders are on the bottom of the pyramid, here to support front-line employees."

Markham has come a long way since her first job after graduating from HCC, when she worked as a recruiter for Reliable Temps in Agawam. Later, as office manager of the family-owned business, she experienced her first
taste of leadership.

After that, she held recruiting positions in Boston, and in 1988 applied for one she was hired to fill, a job in the personnel department of a high-tech engineering firm, where she was immersed in the world of employee relations, benefits, recruiting, hiring, payroll. "I got to learn all the disciplines," she says.

After they'd started their family of three children, Markham and her husband, Jim, moved to Cape Cod, where she worked in human resources for the Visiting Nurses Association of Cape Cod, seeing it through several mergers.

In 2002, Cape Air founder and CEO Dan Wolf hired Markham to build a human resources department at the Hyannis-based business. "I really had to start from the ground up," she says.

At the time, she knew business and people, but not the airline industry. That she learned by listening and interacting with employees until she understood everything from customer service to maintenance to flights management.

As vice president of HR, Markham took the airline through a reorganization. "We had many people in titles that didn't fit what they were doing. We had to make sure we had the right person in the right role. That's key," she says.

In her 14 years there, she says, she's grown a strong, multi-faceted team with the airline that serves 40 cities in five regions around the world, including Micronesia, 8,000 miles away.

Even though the airline industry is not known for women in leadership positions, Markham says Cape Air strives for it. "We have a high number of female leaders and pilots," she says. "We're skewing more toward female leaders than male."

Active in the industry at large, Markham serves on the board for Women in Aviation and is the chair of the board for the Regional Airline Association in Washington, D.C., the first woman to serve in that role in the organization's 40-year history.